Among Indian auto-related companies, special attention in 2014 is focused on the Mahindra & Mahindra group. It overtook Indian rival Tata Motors at home to become the country's third-largest automaker. The company's core activities revolve around manufacturing and distributing SUVs and other midsize and large models. 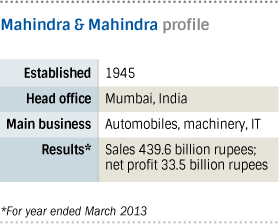 This narrowly focused product strategy is bolstered by the company's high-tech capabilities. Despite slowing growth in the country's overall automobile sales, Mahindra is expected to gain domestic market share.

Mahindra' chairman and managing director, Anand Mahindra, is a Harvard-educated, third-generation scion of one of India's oldest business families. He joined the management team of Mahindra & Mahindra in the 1990s and has since helped transform the company into a globally competitive business. His prioritization of corporate structure is bearing fruit. The company's mainstay SUV has attracted foreign attention.

Future expansion at the company is the next step. Mahindra recently acquired an Indian startup that specializes in electric vehicles.  The company is also developing a new chassis, building a new factory and seems poised to announce more measures. Behind all this is Mahindra's mantra: Think of the corporation.