NEW YORK/FRANKFURT/TOKYO -- Global steelmakers are jostling for position in Mexico, looking to win custom from automakers expanding in the country.

Mexico has signed a number of free trade agreements and offers relatively cheap labor, making the country an attractive proposition for manufacturers.

South Korea's Posco was the first to invest big in the North American country.

Nippon Steel & Sumitomo Metal is now working to catch up by teaming up with Luxembourg's ArcelorMittal and purchasing a large-scale plant with the world's No. 1 steelmaker.

The central Mexican state of Guanajuato is known as one of the world's top silver producing areas. It is now emerging as a major auto production base. Japanese and U.S. carmakers have set up plants there. 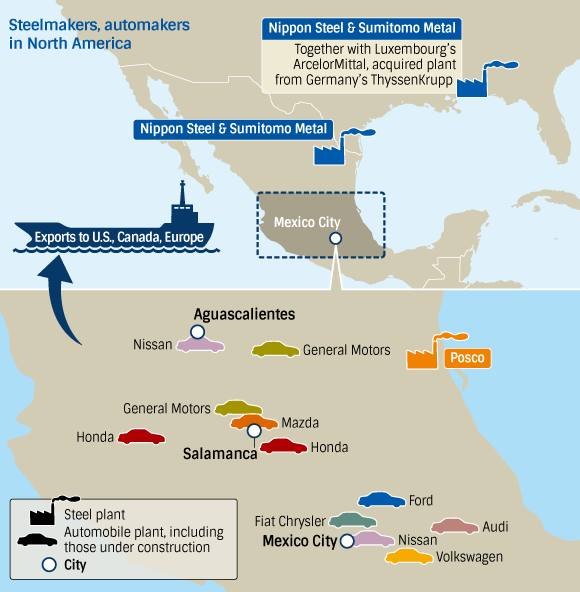 Mazda Motor began production in the state in January, in the city of Salamanca. The plant gets 60% of its auto steel sheet from Posco. Trucks bearing the Korean company's logo on them are seen frequently there. The rest of the steel sheet used at the plant comes from Nippon Steel.

Posco has narrowed the technological gap with Japanese rivals, but it has just started making inroads into its Northeast Asian neighbor. A Mazda official stressed that its deal with Posco is not a long-term arrangement. "The procurement ratios for individual suppliers of steel sheet change constantly," the official said. That Mazda's Salamanca plant relies on Posco for 60% of its steel sheet supplies is highly unusual.

Posco is helping Mazda on production innovation. Thanks to the South Korean company's help, the automaker was able to introduce a sophisticated technology that can stamp out 12 different parts from steel sheet in a single pressing.

The South Korean steelmaker's reputation is growing in Mexico. Posco is "the most important partner" for Nissan Motor's new auto plant in the city of Aguascalientes, Oswaldo Noriega, director at the automaker's local unit, said.

Posco has four steel sheet warehouses in Mexico. All of them are close to Japanese automakers' plants.

There is a good chance Japanese autos will make up half the output. Nissan sees Mexico as key to global competition, according to President and CEO Carlos Ghosn.

Posco moved quickly once it decided to build a supply route to Japanese companies in Mexico as part of its global business expansion drive.

The company set up its first Mexican auto steel sheet plant in 2009, in the coastal city of Altamira. It quickly decided to build a second plant. This new facility began operations in January. Posco's production capacity in the country now stands at 900,000 tons a year -- enough steel sheet to make 1.8 million cars.

Nippon Steel's output in Mexico is less than half that of Posco's. It launched production there just last August, through a tie-up with major Argentine steelmaker Ternium.

The Japanese steel company may to boost supplies to Mexico through the U.S. The company has teamed up with ArcelorMittal in a roughly 160 billion yen ($1.53 billion) joint purchase of a U.S. plant from Germany's ThyssenKrupp.

The world's leading steelmaker, which is recovering from a slump caused by the economic slowdown in Europe, also has a plant for semi-finished steel sheet in Mexico.

Posco has headaches other than growing competition. The Mexican government's decision last June to slap a 60%-plus anti-dumping tax on South Korean cold-rolled steel sheet was a severe blow to Posco. It has been making auto steel sheet by importing cold-rolled sheet from home.

"Posco must be operating at a loss" in Mexico, a high-ranking Nippon Steel official said, also pointing out the strength of the won.

Regardless, there is no sign Posco will readjust its focus on Mexico as a key base in its global business strategy.

After a string of large-scale mergers and acquisitions, the pace of global steel industry reorganization has slowed down lately. It may begin accelerating again, as competition in Mexico heats up.