Malaysian automaker Proton's new CEO has revival on his mind KUALA LUMPUR The new head of troubled Malaysian carmaker Proton is promising to restore the loss-making company to its former glory by targeting the Southeast Asian market, which is now dominated by Japanese auto brands.

Li Chunrong, an industry veteran from China with 30 years of experience, joined Proton on Oct. 1 as chief executive of Perusahaan Otomobil Nasional, the manufacturing arm of Proton Holdings. He has made improving customer satisfaction his immediate priority.

"My job as the new CEO of Proton is not to look at the past," Li said when he was introduced to the press in Malaysia on Sept. 29. "We are committed to realizing our shareholders' vision of reviving Proton back to a leading national brand in Malaysia and [Southeast Asia] in the next 10 years." 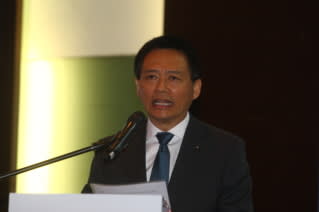 Li has said that over the next few weeks he will set up eight "cross-function" teams within Proton to review its procurement strategy, research and development, and quality improvement.

Proton's customer service index stands at 755 points, below the Malaysian market average of 761, according to market researcher J.D. Power, which polls new-car owners about their purchases.

OUTSIDE ASSISTANCE Li was tapped from Dongfeng Honda Engine by Chinese carmaker Zhejiang Geely Holding Group, which in June announced that it had agreed to acquire 49.9% of Proton from DRB-Hicom, a Malaysian conglomerate. He served as a board member and vice president of the engine-parts maker, a unit of Chinese state-owned Dongfeng Motor Group, where he began his career in 1987.

Setting aside national pride, DRB-Hicom, under a government directive to turn around Proton, chose Geely as its strategic partner, which subsequently brought in Li. He joins the ranks of foreign executives working to revive companies of national interest that are usually led by Malaysians.

Li, a 52-year-old with two master's degrees, including one from the Massachusetts Institute of Technology, is not the first foreigner to take the helm at Proton. Set up as Malaysia's national carmaker in 1983 with the assistance of the Mitsubishi group, Proton was headed by Japanese executives in its early years before ownership evolved into private equities controlled by DRB-Hicom.

"Proton now has access to the global synergies, expertise and financial support it needs from the Geely family," Li said at his appointment announcement last month.

But Malaysia and the predominantly right-hand drive sector in Southeast Asia is a new marketplace for both Li and Geely (Steering wheels are on cars' left side in China). It is a market of about 3 million new vehicles sold annually and dominated by Japanese car models, which boast above-average levels in the customer service index that new players will have to beat in order to win over car buyers.

"Proton or any Chinese manufacturer would have to sell their cars at a low price and with good warranty to penetrate regionally," said Yamin Vong, a Malaysian automotive journalist who has covered the industry for more than three decades.

IMAGE PROBLEMS For years, Proton has suffered from the widespread perception that its vehicles are of poor quality, because it lacked the economies of scale, Vong said. Proton's vendors have been squeezed to supply parts at a low price despite the small volume to keep car prices affordable.

Market share of Proton, which was the brainchild of former Prime Minister Mahathir Mohamad, has been declining since its peak in 1993. That year, seven out of 10 cars sold in Malaysia were made by Proton. In the first half of 2017, its market share stood at just 14%.

Geely, which is based in Hangzhou, China, and listed on the Hong Kong stock exchange, plans to manufacture one of its best-selling sport utility vehicles, the Boyue, in Malaysia starting in 2019. The Chinese carmaker, which also owns Sweden's Volvo Cars and London Taxi of the U.K., aims to produce 500,000 cars a year in Malaysia by 2020, with an eye on export markets.

That means Geely-led Proton will have to renegotiate the terms for its future model lineups with the company's existing vendors, who may not be able to object to the terms -- even if the conditions are unfavorable. Some of Proton's vendors have been enjoying political patronage over the years, getting the best deals with government support. As the global auto industry increasingly moves toward hybrid engines and electric cars, which are still at an early stage of development in Malaysia, Geely may choose its own vendors at the expense of existing suppliers. Auto industry watchers hope that Geely and the new Proton management, which includes former Volkswagen executive Winfried Vahland as a board member, will bring a much-needed shakeup to narrow the gap in market share and technology between Proton and its competitors.

"Hopefully, Li can change the mindset at Proton, which has all along been used to a protected environment," said Chips Yap, managing editor of Motor Trader, an automotive news portal and vehicles trading platform. Yap, also an auto industry veteran, said Li's appointment was realistic based on his experience in several joint ventures involving Groupe PSA of France, Japan's Honda Motor and Nissan Motor, and Kia Motors of South Korea.

Geely, under its founder and Chairman Li Shufu, has grown to become China's seventh-largest automaker by vehicle sales without much Chinese government support, Yap said, adding that Li Shufu may also want Proton to thrive in the long run without Malaysian government aid.