MANILA -- City of Dreams Manila, a large casino resort here, is trying to get the country's expanding middle classes to come by and spend some money, though it primarily targets wealthy Chinese. 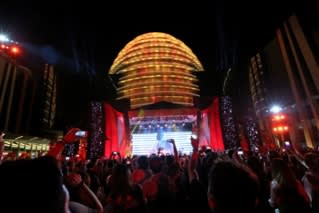 City of Dreams Manila and other casinos are offering Filipino workers an alternative to working at call centers. (Photo by Keiichiro Asahara)

This is a departure from the casino business model of focusing on high rollers and getting them to place really big bets.

The Philippine government is advocating the casino industry and is developing a zone it calls Entertainment City near Manila Bay. In 2013, Solaire Resort and Casino became the first to open in the gaming and entertainment hub. The casino resort is now crowded with people who appear to be middle class Filipinos.

Because gambling can be addictive, the casino industry is often controversial. But it is undeniable that it creates jobs and economic activity.

There is also a line of thinking that economic growth which depends on the service industry rather than on manufacturing is unstable. However, the flourishing casino resort zone here suggests there is a growth model that cannot be found in any economic textbook.

City of Dreams Manila officially opened Feb. 2 at the gateway of Entertainment City. It is operated by Melco Crown Entertainment of Hong Kong and employs as many as 8,000.

The casino resort sits on about 0.06 sq. km of land and has three luxury hotels. It holds some 400 gaming tables and more than 1,700 slot machines in addition to nearly 20 restaurants, nightclubs and an amusement facility for children.

Lawrence Ho, co-chairman and CEO of Melco Crown Entertainment, marked the resort's opening by saying the Philippines is a promising market because of its remarkable economic growth and that sectors other than gaming may contribute to the facility's sales.