Alibaba's market value grew to $570 billion in 2019 through Dec. 20, ensuring that it will end the year as Asia's most valuable company.   © Reuters
KENTARO IWAMOTO, Nikkei staff writerDecember 26, 2019 08:54 JST | China
CopyCopied

With recession fears having been dispelled and lower interest rates prevailing globally, analysts say equities will attract more investments next year and that the valuations of Asia's leading tech companies could reach higher.

The Nikkei Asian Review compared Asian companies' market caps as of Dec. 20 with where they were at the end of 2018 in dollar terms.

New York-listed Alibaba's market value grew to $570 billion in that period, making the company Asia's No. 1 by that measure for the first time since it listed in 2014. Globally, Alibaba had the seventh highest valuation between Facebook ($588 billion) and Berkshire Hathaway ($554 billion).

In Alibaba's secondary listing in Hong Kong in November, investors rushed to buy more than $11 billion worth of shares in an offering that was oversubscribed multiple times.

Tencent Holdings, Asia's market cap leader for 2018, grew 20% through Dec. 20 but fell to No. 2 due to weaker ad sales, themselves the victim of the rising popularity of social-media upstart ByteDance, which operates TikTok. Tencent also suffered from regulatory headaches in its core gaming business, with Beijing approving fewer titles this year and imposing tougher restrictions on minors' playing hours.

A rising star in the Chinese tech sector was Meituan Dianping, a Tencent-backed super app whose market value more than doubled to $76 billion during 2019. A nascent trend toward healthy light meals, beverages and nighttime snacks drove profitability at its core food delivery service.

As for tech sector manufacturers, semiconductor producers gained big as the tech cycle bottomed out.

Samsung Electronics jumped 39% this year as investors bet on the recovering memory chip industry. In July, Taiwan Semiconductor Manufacturing Co. experienced a recovery after a monthslong slowdown stemming from the U.S.-China trade fracas. In October, TSMC increased its planned capital spending for 2019 to up to $15 billion, from around $10 billion.

Globally, stock markets performed well in 2019, with major indexes in the U.S., Germany, China and Japan all rising about 20% or more. Despite weaker economic growth in most countries -- the International Monetary Fund projects this year's global rate at 3%, down from 3.6% for 2018 -- forward-looking investors see positive signs such as a recovery in manufacturing activity, developments in the U.S.-China trade talks as well as fiscal and monetary stimulus in some countries. All of these factors point to a 2020 rebound.

"Equity investors love growth," said Chetan Seth, Asia ex-Japan equity analyst at Nomura. "So if you see a bit of recovery, a bit of growth coming back, you would see equities also react to that." 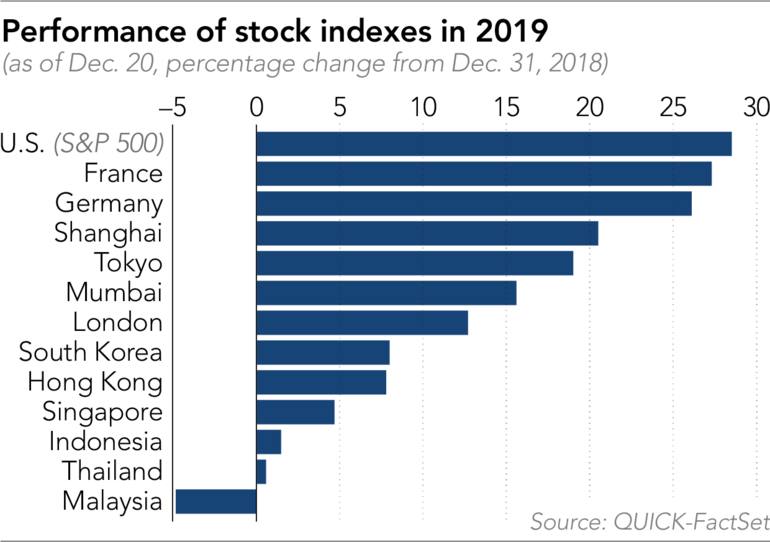 Southeast Asian markets underperformed, with Indonesia and Thailand rising marginally and Malaysia dropping 5%. "North Asia tends to benefit more when you have a recovery in the tech cycle or the global growth cycle," Seth said. "In Southeast Asian markets, the earnings are less cyclical."

One of the companies that grew sharply was Taiwan's Hotai Motor, whose market value leapt 2.7 times from a year ago. For the first 11 months of this year, the carmaker and distributor's sales climbed nearly 14%. The strong performance was mainly driven by a warm market reception to Toyota and Lexus models, especially in regard to the RAV4 and Altis models, analysts said.

The market cap of China's state-owned Kweichow Moutai, the largest distiller of traditional baijiu liquor, rose 90% and became a $200 billion company. Kweichow Moutai is widely acknowledged as one of the country's most profitable listed corporations, with a gross profit margin of 91.5% during the first nine months of 2019. Daiwa Capital Markets maintains an "outperform" rating on it despite shares trading close to their record high. Its analysts expect "demand for high-end segments to remain healthy."

Chinese construction machinery maker Sany Heavy Industry rose 96%, thanks to a powerful boost from the Belt and Road initiative. On top of a solid base at home, its international expansion under the infrastructure-building drive led by President Xi Jinping is pushing its market capitalization, $18.6 billion as of Dec. 20, closer to that of its global peers Caterpillar of the U.S. and Komatsu of Japan.

The global market cap ranking is dominated by U.S. and Chinese companies. India's highest-valued company finished at No. 66. Reliance Industries, a conglomerate spanning oil, chemicals and telecommunications, rose 40% to $143 billion. Its share price jumped in August when it pledged to become debt-free in 18 months and moved to sell stakes in some oil assets to Saudi Aramco, the largest valued company after the historic blockbuster IPO in December. The company's plan to invite strategic and financial investors to its consumer businesses, Reliance Jio Infocomm and Reliance Retail, also provided momentum for the stock rally. 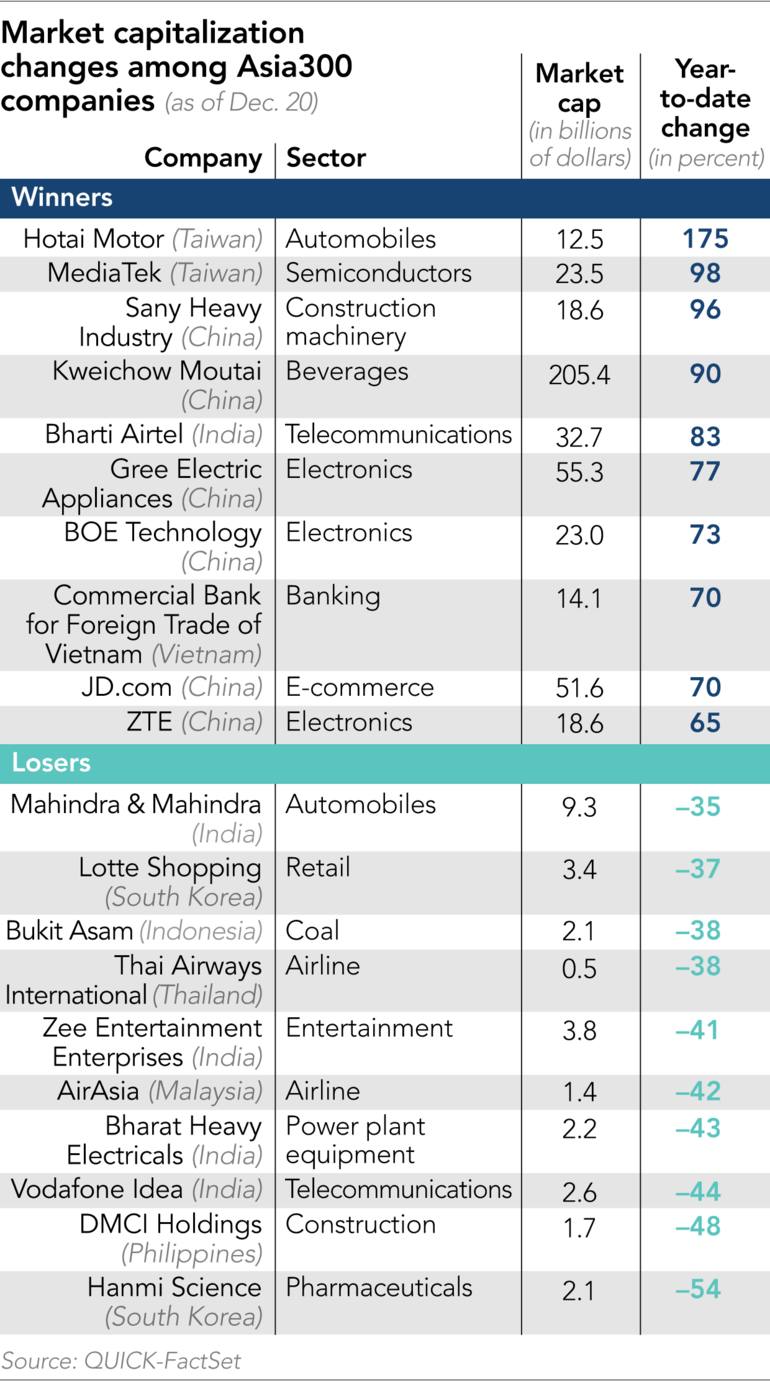 "In a way, Mahindra has been the worst hit on both sides," said Deepesh Rathore, director of automotive consultancy Emerging Markets Automotive Advisors. "They have lost the urban market and also the rural market. I don't see a comeback for Mahindra in 2020 as well."

Southeast Asian airlines were also among the year's big losers. Investors punished Thai Airways International in October when President Sumeth Damrongchaitham mentioned that the perennially loss-making national carrier might have to shut down. Sumeth later explained that the airline is not in imminent danger of insolvency but failed to convince investors. Thai Airways suffered a 38% drop in its market value during the year.

The flag carrier faces intensifying competition from other legacy airlines as well as budget carriers.

The valuation of Malaysia's AirAsia fell 42% as rising fuel prices and other factors ate into the airline's earnings. Investors are also wary of the intense competition among budget carriers, particularly in Thailand, Indonesia and India.

Looking ahead, analysts are optimistic about Asian stocks in 2020. "We have a constructive view for equities in 2020," Nomura's Seth said, citing huge reservoirs of liquidity and the increased global money supply. "If recession is no longer a base case, you would see some of that money come from bond sides to equity sides."

In a note issued on Dec. 18, Ronald Chan, chief investment officer for Asia ex-Japan equities at Manulife Investment Management, wrote, "The combination of potential USD weakness, lower local interest rates, and improving Asia tech fundamentals and consumer discretionary spending should provide better earnings delivery in Asia compared to developed markets. Unlike the U.S. markets with an election overhang, Asian valuations remain reasonable and earnings growth will be one of the key drivers for Asia markets in the coming year."