Ant said in response that it would also halt the Hong Kong portion of what was set to be the world's largest IPO. The company was due to make its debut on both markets on Thursday and was set to raise as much as $39.6 billion across the two exchanges.

The suspensions came after top Ant executives and controlling shareholder Jack Ma were summoned to a meeting with Chinese regulators on Monday that was later described as a regulatory warning. In a statement on Tuesday evening the Shanghai exchange said the supervisory interviews and changes in rules governing the company's businesses were "major".

"The material matters might cause your company to fail to meet the disclosure requirements for an initial public offering," the exchange said. "The exchange has decided to postpone the listing of your company."

The share price of Alibaba Group Holding, which owns a third of Ant, dropped in New York after Ant also suspended what was intended to be a simultaneous listing in Hong Kong. The stock closed 8.1% lower on the day at $285.57 despite the Dow Jones Industrial Average gaining 555 points on Tuesday, its best showing since mid-July.

In a statement to the Hong Kong Stock Exchange, Ant said it was told by Chinese regulators that the company "may not meet listing qualifications or disclosure requirements" in Shanghai "due to material matters relating to the regulatory interview of our ultimate controller, our executive chairman and our chief executive officer by the relevant regulators and the recent changes in the Fintech regulatory environment".

Refunds of investor money "will be made as soon as possible", Ant said.

Its offering closed last week after record subscriptions in Shanghai and Hong Kong, with retail investors alone putting in bids worth $3 trillion.

"It's too early to say if the deal will suffer a short-term delay or be postponed indefinitely, pending resolution of the issues at hand. Either way, this is a dramatic and unexpected development -- and will impact other fintech IPOs waiting in the pipeline," said Philippe Espinasse, founder of consultancy P&C Ventures and former head of equity capital markets at Nomura.

Alvin Cheung, associate director at Prudential Brokerage, said: "No one knows when Ant Group can be listed again. But even if it will be listed again, I believe its market value cannot be set that high any more. A big bucket of cold water has been poured on investors' high hopes."

An Alibaba spokesperson said the company "will be proactive in supporting Ant Group to adapt to and embrace the evolving regulatory framework."

"We have full confidence in Ant Group colleagues' ability to do a good job," the spokesperson said. "Society has high expectations for Alibaba. We will continue to work hard to not only meet but exceed expectations and fulfill our responsibility to society." 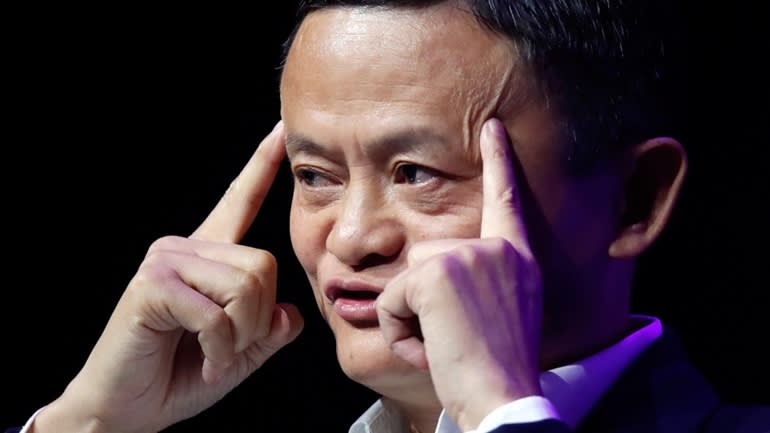 Alibaba founder Jack Ma: He was among a number of Alibaba figures summoned for what was later described as warning by Chinese regulators.   © Reuters

No specific details of the meeting were revealed by either side. However Ant executives were told that the company's online lending business faced tighter government scrutiny over matters including capital adequacy and leverage ratios, Reuters reported, citing unnamed sources.

Ant said earlier Tuesday that it would implement "in depth" the recommendations of the meeting and follow guidelines including stable innovation, an embrace of supervision and service to the real economy.

Chinese authorities have become wary of banks issuing loans through micro-lenders or third-party digital platforms such as Ant. They fear such practices could exacerbate loan defaults and cripple asset quality in a banking system that has already required authorities to bail out several small lenders.

The central bank and the banking regulator on Monday published draft rules that set a 5 billion yuan ($746.8 million) registered capital threshold for microlenders that offer loans online across different regions of the country.

The draft rules and the meeting with Ant's executives "indicates that regulators are taking serious steps against online microlending companies and fintech companies including Ant," Jefferies analysts led by Shujin Chen said in an investors' note. The analysts said they "expect slower growth in online microloans and lower profitability for loan facilitation business."

The rules come on top of a flurry of other regulation imposed by authorities to curtail risks in the digital lending sector since Ant filed its IPO prospectus in August. Other rules include a limit on use of securitization to fund consumer loans, a cap on loan rates, and new capital and license requirements for financial conglomerates.

Ant was the largest online consumer credit and small-business loan originator in China as of June 30, with outstanding balances of 1.7 trillion yuan and 422 billion yuan, respectively, according to consulting firm Oliver Wyman.

Revenue from the online consumer and small-company loan business made up nearly 40% of Ant's total revenues in the first six months of this year.

Ant originates loans, 98% of which had been underwritten by roughly 100 partner financial institutions as of the end of June, with Ant collecting service fees. The business is one of the key pillars of the company's valuation, according to analysts.

Ma's meeting with regulators also came after he criticized state-owned banks, local and global regulation at a financial summit last month attended by scores of bankers and regulators.

In the speech, delivered before Ant priced its IPO, Ma said the large banks in China's $40 trillion banking system had a "pawnshop mentality" as they lent largely against collateral for loans, and urged financiers to lean on big data to determine the creditworthiness of companies, as Ant had done in its lending.

He said China's financial system should reduce its dependency on the big banks and rely on innovative companies such as Ant to offer an ecosystem of "lakes, ponds, streams and brooks" that carry capital into the different corners of economy.

On Tuesday, Ant apologized through its WeChat account "for any inconvenience caused" by the suspension of its listing.

"We will overcome the challenges and live up to the trust on the principles of: stable innovation; embrace of regulation; service to the real economy; and win-win cooperation. We will continue to serve small and micro businesses and ordinary citizens with our passion, professionalism and commitment for society," the fintech group said.