Asia's lead in virus recovery not showing in stock markets 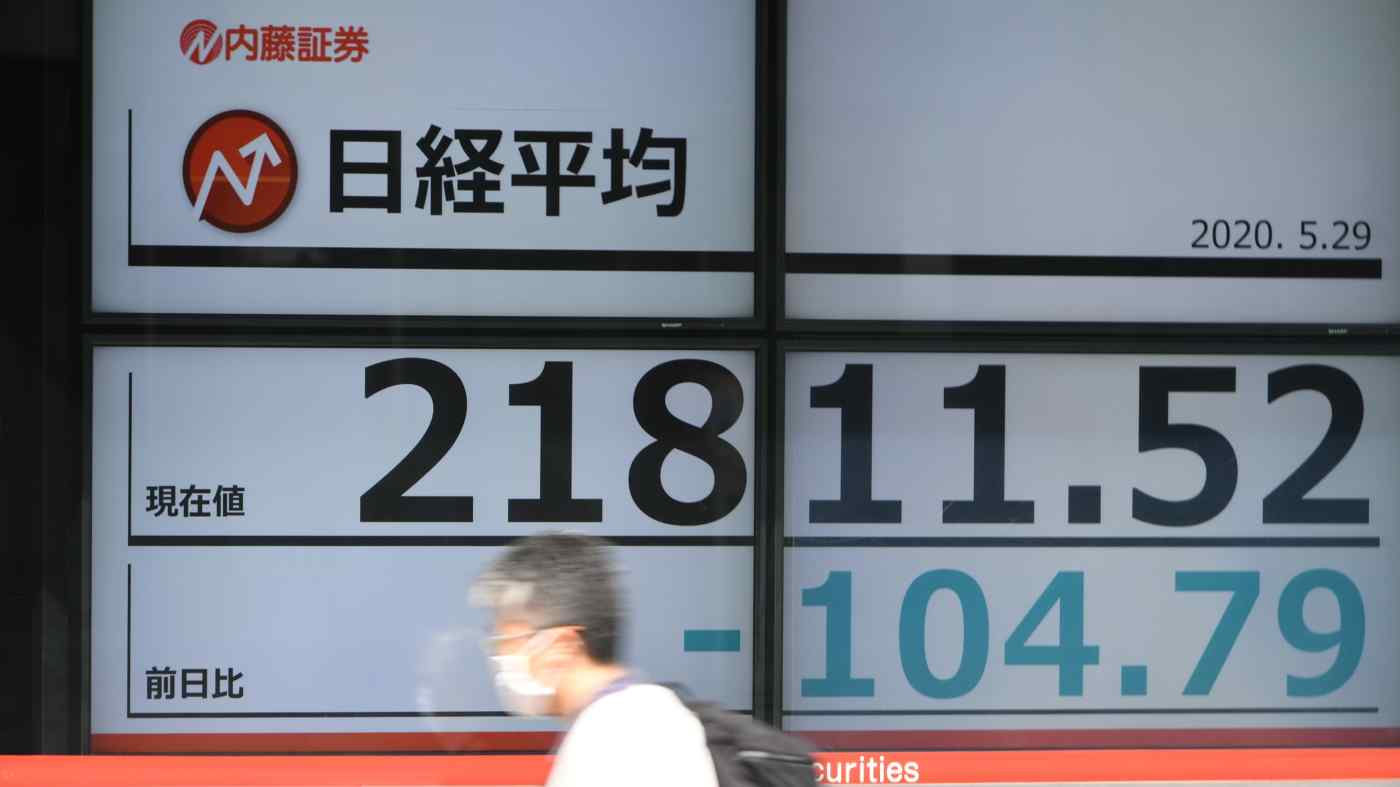 Fund managers across the region are sifting for bargains and deploying their cash in defensive plays such as health care and technology stocks that are primed to benefit from the virus-led lockdowns. (Photo by Kosuke Imamura)
NARAYANAN SOMASUNDARAM and JADA NAGUMO, Nikkei staff writersMay 29, 2020 15:12 JST | China
CopyCopied

HONG KONG/TOKYO -- Asia's head start over the rest of the world in reopening its coronavirus-hit economies is not reflected in the region's share indexes, with recoveries lagging those in developed markets.

The MSCI gauge of Asian equities ex Japan has risen 15% since March 23 compared with a gain of more than 30% for the S&P 500 index of U.S. stocks and the MSCI All World Index, which represents performances across 23 developed markets.

Retail investors have poured into Asian stocks in search of bargains, signing up to trade in record numbers. But market participants say long-term capital is missing from the market as these investors fear a second coronavirus wave and the worsening political environment for business.

Investors are "spooked by ratcheting tensions between the U.S. and China," said Naoki Iizuka, Japan Equity Strategist at BNP Paribas Securities in Tokyo.

In addition, Beijing's push to approve a national security law for Hong Kong, a strong U.S. currency, the threat of an emerging market debt crisis and loss in global demand for goods and services amid the pandemic have curbed investor appetite.

"The major asset managers aren't yet heavily invested and it seems more of a retail, domestic story in Asia right now," said John Woods, the chief investment officer for Asia Pacific at Credit Suisse in Hong Kong. "Although Asia and China are getting back to work, the global demand is not there and that is hindering equity markets. How China recovers from the virus is going to be crucial for [the] rest of Asia."

The scale of China's recovery is so unclear that the government last week abandoned setting an annual economic target for the first time in three decades, citing uncertainty from the virus, the health of the global economy and trade tensions with the U.S. 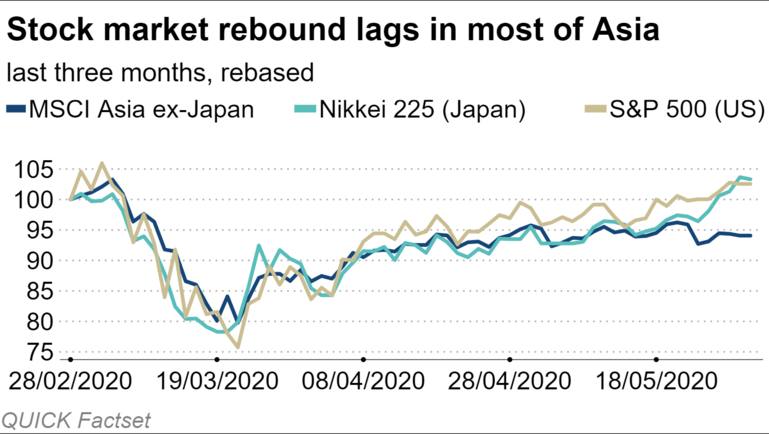 That has so far masked fundamentals such as resilient company earnings and a stronger growth outlook for Asia over the rest of the world. In Asia, earnings downgrades stand at about half the levels of developed markets, according to a study by Goldman Sachs this month. UBS expects 0.5% earnings growth in Asia in 2020, led by the second half of the year with the measure accelerating to 16.8% next year.

"We do think [the sentiment toward Asian stocks] will change," said Simon Weston, a senior portfolio manager at AXA Investment Managers in Hong Kong. "Fundamentals from an economic perspective look attractive in Asia. Asia will continue to become more attractive in the longer-term."

While fund managers across the region have cut their elevated cash positions, they are deploying what they are investing defensively, such as health care and technology stocks that are primed to benefit from the virus-led lockdowns, while also sifting through markets for bargains.

"Stocks that were being dumped by investors during the height of the coronavirus-led panic became cheap and some were worthy of purchase when estimating long-term performance potential," said Masafumi Oshiden, head of Japan Equity at BNY Mellon Asset Management in Tokyo.

The market rout has lured retail investors into stocks from Mumbai to Sydney. In India, ICICI Securities, the brokerage arm of ICICI Bank, opened the most accounts it has in a year in the first quarter. In South Korea, retail investors have bought a net $25 billion in shares so far this year, according to the Korea Exchange, whereas in the same period last year, they were net sellers. In Australia, the number of new retail investors in Australia more than trebled, spurring a doubling of turnover by retail brokers in the period, according to the securities regulator

And in Japan the total of new accounts opened at the five major brokerages in March doubled from the previous month.

Data from Japan Exchange Group shows that for the four months through April, retail investors purchased a net 1.7 trillion yen (around $15 billion) of shares while foreign investors sold a net 3.4 trillion yen worth.

While Japan's Nikkei Stock Average has recovered 31% from its lows in March, only 11% of the 225 stocks in the index have risen this year. Pharmaceuticals and retailers have led the rebound. Daiichi Sankyo and Chugai Pharmaceutical are up 69% and 50% respectively from the lowest point in March. Cyber Agent, whose game business hs experienced a surge in demand, has risen 58%. E-retailer Rakuten has climbed 44%.

In other regional markets, recovery has been driven by domestic investors favoring sectors such as e-commerce, health care and education, which derive most of their earnings from local economies.

"We favor the sectors that are driven by domestic spending, and exhibit healthy business normalization and long-term resilience," said Frank Tsui, a senior fund manager at Hong Kong-based Value Partners, which manages about $11 billion.

Geographically, money managers are preferring nations such as China, Taiwan and South Korea, which have managed to control the virus, over those in South and Southeast Asia.

The Shanghai Composite is up 3.7% from its March low but has remained resilient throughout the crisis. It is only down 6.5% from the end of 2019. Hong Kong's Hang Seng Index has risen 0.8% over the past few days, though it has been dragged down by Beijing passing a national securities law that has reignited anti-government protests in the territory.

The Taiwan Stock Exchange Weighted Index main share index has climbed 18%. The Jakarta Stock Exchange Composite Index has gained 12% since mid-March and India's Bombay Stock Exchange Sensex has nudged up 6% in the period.

Credit Suisse's Woods said he will start investing with conviction in Asian equities when China plows in enough fiscal stimulus to promote a cyclical economic recovery and the U.S. dollar begins to weaken, which he expects to happen next year.

Chinese Premier Li Keqiang said the government foresees its 2020 budget deficit rising to more than 3.6% of gross domestic product, up from 2.8% last year, as the nation moves to boost infrastructure spending, employment and small business support. The U.S. dollar has climbed 3.4% against a basket of currencies this year.

Although stating that he is not overly pessimistic about the stock market, Tomomi Yamashita, a fund manager at Shinkin Asset Management in Tokyo, says he is waiting out certain risks.

"It is difficult to make investments while [company] earnings forecasts are missing," he said, adding that other risks, such as "a debt crisis in emerging markets," are also dampening investor sentiment.