Optimism returns as investor hopes for US stimulus run high 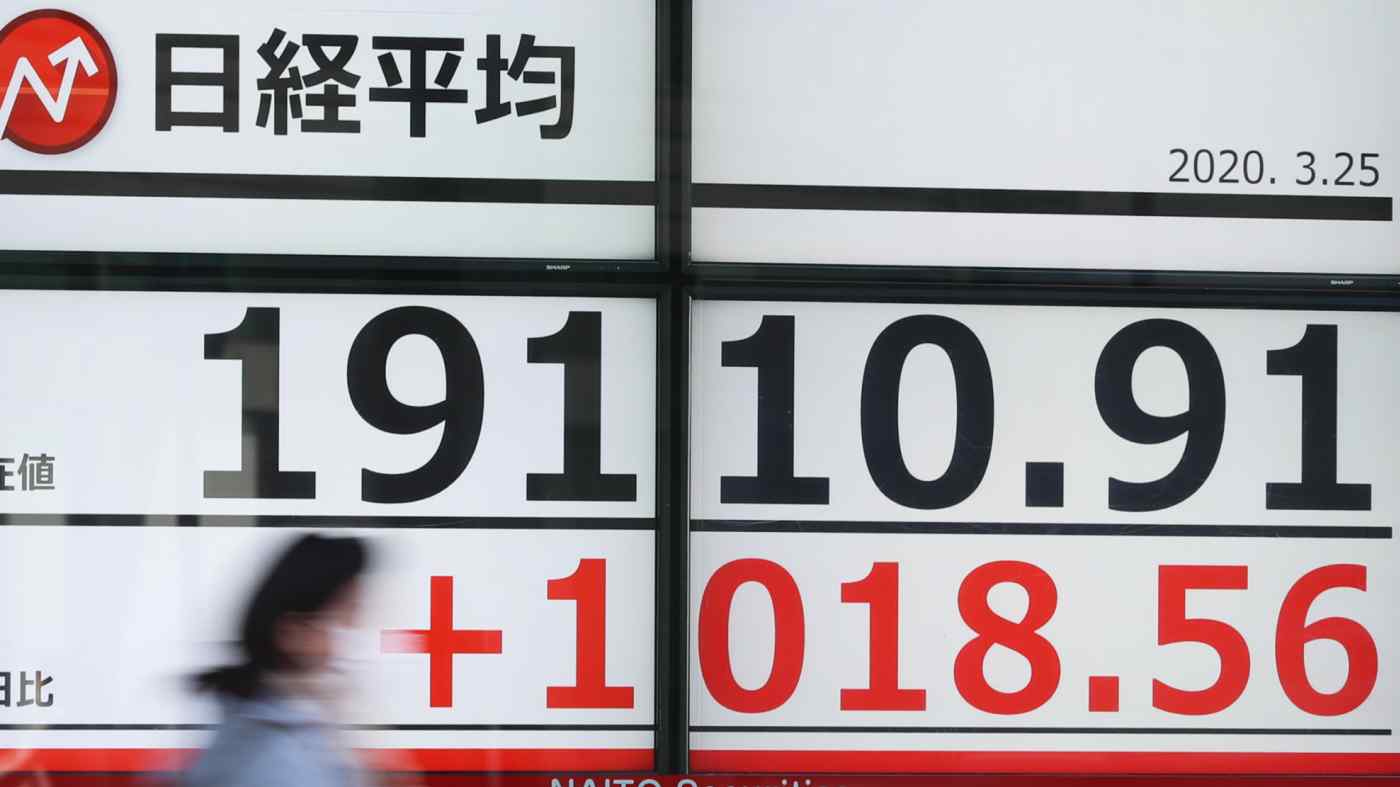 The postponement of the 2020 Tokyo Olympics and high hopes for a trillion-dollar-plus stimulus in the U.S. propelled Tokyo stocks to a big opening on March 25. (Photo by Rie Ishii)
JADA NAGUMO and NARAYANAN SOMASUNDARAM, Nikkei staff writersMarch 25, 2020 10:12 JSTUpdated on March 25, 2020 18:57 JST | Japan
CopyCopied

TOKYO/HONG KONG -- Asian stock markets rallied sharply on Wednesday in the wake of a surge in U.S. stocks on hopes of a big stimulus package to help the economy withstand the coronavirus crisis.

Japan's benchmark stock index climbed 8% on Wednesday as investors rushed to buy back company stocks like SoftBank Group, Sony and Toyota Motor. The index closed 1,454 points higher, recording the largest point gain in over 26 years. It followed the lead of Wall Street, where the Dow Jones Industrial Average also experienced its largest point gain in history.

Investor sentiment improved on faith that the U.S. Congress will pass a stimulus package worth at least $1.6 trillion to shield businesses and households from the economic damage wrought by the coronavirus. Senate leaders and President Donald Trump's administration reached an agreement on the stimulus package Wednesday afternoon, Japan time.

The lifting of uncertainty that had surrounded the Tokyo Olympics also helped to buoy the market. Japanese Prime Minister Shinzo Abe told reporters on Tuesday night that the games will be pushed back one year. The decision was announced after a phone call with International Olympic Committee President Thomas Bach.

The yen was little changed as the dollar extended declines against a swath of developed and emerging market currencies.

"I would have liked volumes to have picked up across the markets to give it some real backbone, but shorts have clearly covered, and many reversed for this trading rally," said Chris Weston, head of research at brokerage Pepperstone Group. "When we see the virus case count numbers, it does make me question if the rally will be sustained."

Moves by central banks have helped improve market sentiment. The Bank of Japan is accelerating its asset purchases through exchange-traded funds, while the U.S. Federal Reserve promised to buy unlimited amounts of Treasurys and other assets, including corporate debt, to support the flow of credit and steady financial markets.

However, analysts expect volatility will continue as the pandemic races ahead in the U.S., Europe and to a lesser extent Japan. The U.S. has more than 53,000 confirmed cases, trailing only Italy and China. The country's death toll surpassed 700 on Tuesday.

Hirokazu Kabeya, chief global strategist at Daiwa Securities, said, "Investors won't be able to relax for a while."

He added: "There is still no sense of direction in the market. The recent stock rally is only a natural rebound considering the level of sell-offs it went through. There is a good chance the rebound won't last long."

While Democrats and Republicans in the U.S. Congress said they were close to a deal on a $2 trillion stimulus package to limit the pandemic's economic toll, uncertainty remains regarding how quickly a bill can be passed. Democratic Sen. Patrick Leahy told reporters on Tuesday evening that he expects a vote to take place on Wednesday morning. The legislation is being framed as crucial for hospitals, small businesses and families.

Data released on Tuesday shows a key gauge of activity at service providers and manufacturers contracting the most on record. The IHS Markit composite index of purchasing managers slumped 9.1 points to 40.5, the biggest drop in data since at least October 2009 and following similar slumps across Europe, the U.K., Japan and Australia.

Markets have gyrated for most of this month as investors try to decipher the impact of the coronavirus on asset classes while factoring in unprecedented monetary and fiscal stimulus measures. The S&P 500 index, for instance, has risen or fallen more than 5% seven times since March 9. Still, market losses have far outweighed gains with more than $20 trillion in global equities wiped out since the peak in January.