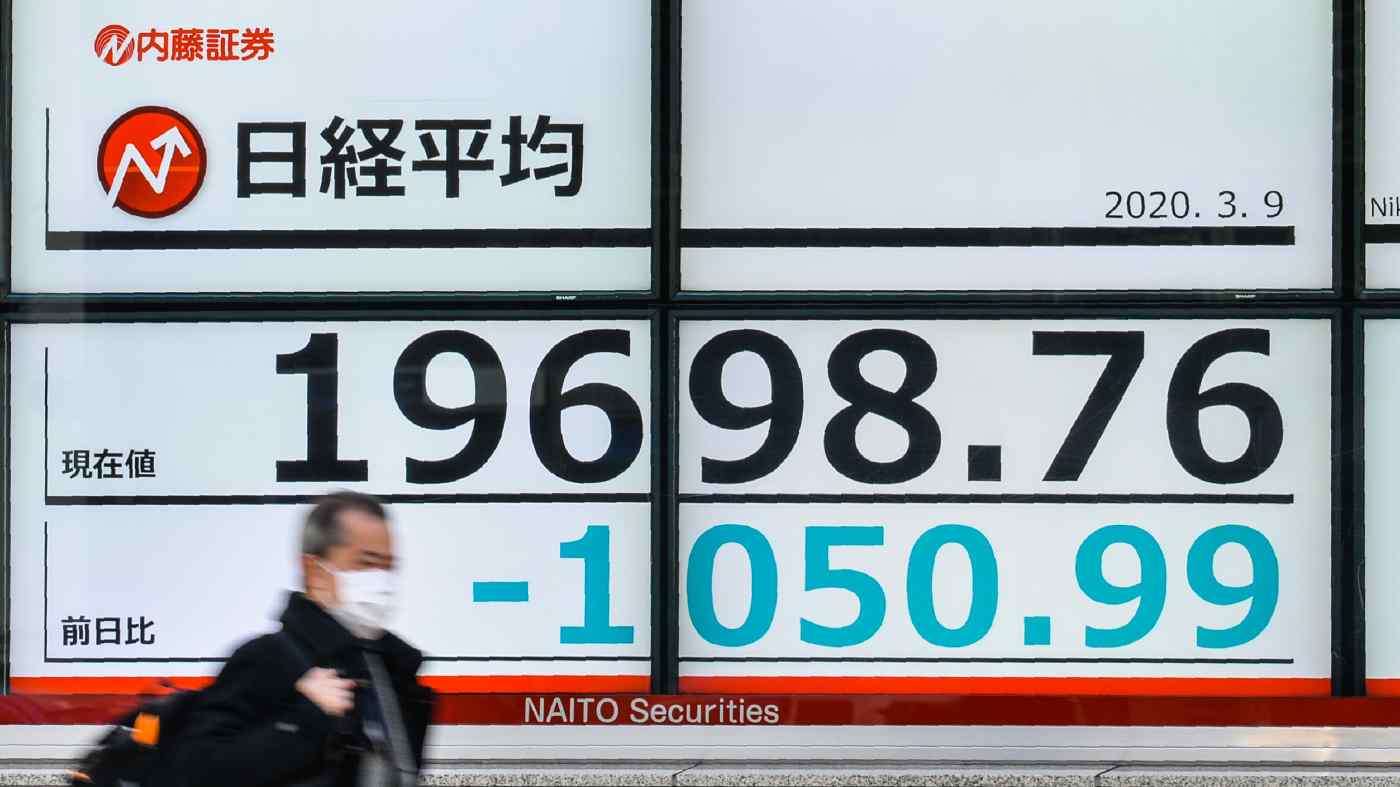 Oil prices were on course for their biggest one-day drop since the 1991 Gulf War after Saudi Arabia, the world's largest oil exporter, ended failed talks with Russia over cutting supply and embarked on a fierce price war. New York crude oil futures were trading at around $32 by late afternoon in Asia, down 22%, or about $9, from Friday.

Investors rushed to the relative safety of the Japanese currency and sovereign bonds as the spread of the new coronavirus in Europe and the U.S. raised fears about the global economy. The yen reached its highest level since November 2016, breaking the 104 mark to as high as 101.55 per dollar.

For stock markets already reeling from the impact of the coronavirus, the drop in oil prices sparked further turmoil. Some markets in Asia-Pacific fell into bear market territory.

Monday's slump means the Japanese and Singapore indexes have dropped more than 20% from their recent highs late last year, putting them into a bear market. The Australian benchmark index is just shy of that mark, having fallen 19.6% from its February high. Hong Kong is down 17% from its April high.

Credit spreads are seen widening amid the risk-off sentiment, which would eat into S&P valuations, UBS Investment Bank strategists, led by Bhanu Baweja, said in a note. That, along with the coronavirus, led to weakness in markets, and liquidity risk may exacerbate the decline in the U.S. equity index. They wrote that they saw the first support coming at the 2,650-2,700 range, about 10% off Friday's close.

"Everything every bearish doomsayer warned about for the last five years is coming to fruition with spreads being crossed on exits and liquidity drying up," said James Whelan, a Sydney-based fund manager at wealth-management firm VFS Group. "This brings us to the adage 'credit ends bull markets,' which appears so particularly for energy markets."

Saudi Arabia is the de facto leader of the OPEC alliance of producers, which had been negotiating with Russia to limit output. The failed talks now have markets bracing for an increase in supply at the same time the coronavirus is dampening global demand.

"A worst-case scenario appears to be unfolding for oil markets," said Fidelity International, the investment manager.

Tatsufumi Okoshi, a senior economist at Nomura Securities, said oil "will stay around $30 for the time being," comparing the impact to the drop after the Lehman Brothers collapse in 2008.

"We'll have to see how long the economic impact from the coronavirus continues," Okoshi said. If the virus spreads further, "there is a possibility of another price drop," he added.

According to the International Energy Agency, Saudi Arabian oil output hit 9.8 million barrels per day, about 10% of the global share, making it the third-largest producer after the U.S. and Russia. Saudi Arabia now plans to push daily production to over 10 million barrels from April.

Makoto Noji, a strategist at SMBC Nikko Securities, said: "The impact of the oil drop on the yen is significant. Many had expected the spread of coronavirus in the U.S., but nobody was expecting the action taken by Saudi Arabia. This surprise is affecting the yen's appreciation. An oil price crash is a huge damage to the U.S. economy as it is an exporter now."

Bank of Japan Gov. Haruhiko Kuroda said before the market close on Monday that the central bank "would take appropriate action as needed without hesitation."

He told parliament that the central bank is working on increasing daily exchange-traded fund purchases as the spread of the coronavirus "has heightened uncertainty of the economy and it has worsened investor sentiment."

Stocks in oil producers plunged. In Hong Kong, CNOOC dropped 17% and PetroChina closed down 9.6%. In Thailand, PTT, the state-owned oil company, plummeted 24% to a four-year low.

In early London trading, shares in BP and Royal Dutch Shell both were down about 13%.

According to Tai Hui, chief market strategist for Asia at J.P. Morgan Asset Management: "Further downside risks in oil prices will hit energy stocks, which in most cases are already trading at steep discounts due to fear of weaker oil demand growth. Energy companies are also the largest component of the U.S. high-yield corporate bond index, and a further drop in oil prices could prompt the credit spread widening further."

Cryptocurrencies were not immune to the sell-off. Bitcoin, the largest such currency, dropped as much as 12%, marking its biggest one-day slump since September. In late afternoon trading in Singapore, Bitcoin was 8.8% lower, while Ethereum and Ripple both fell more than 9%.

In Japan, Yasuo Sakuma, chief investment officer at Libra Investments, said equity investors were taking fright over the coronavirus and its impact on the global economy, as well as the sudden plunge in oil prices.

"It is difficult to think about the long-term outlook for Japanese stocks," Sakuma said. "I don't think there is much willingness in the market right now to buy stocks."