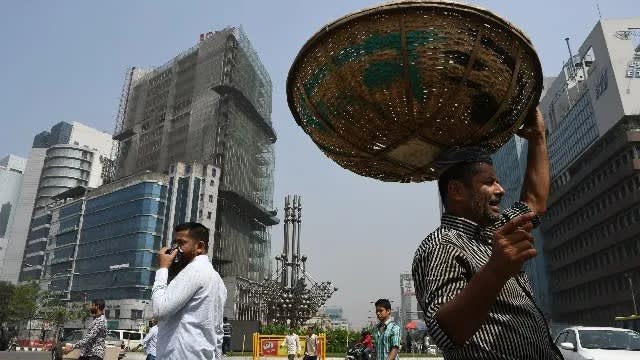 DHAKA -- Bangladeshi stock exchange authorities are monitoring share sales by brokers and financial institutions as they seek to stabilize markets after a six month slide which prompted retail investors to come out in protest.

The government stepped in last month when confidence was hit by the collapse of a leasing company and concerns over weakened bank liquidity. In late July the Dhaka Stock Exchange Broad Index hit its lowest level in two and half years, falling 16.5% between late January and July 22. Volatility was exacerbated by a row between telecom regulator and network operator Grameenphone.

The market slump spurred hundreds of small investors to protest outside the stock exchange for six days in mid-July, under the banner of the Bangladesh Capital Market Investors' Unity Council. The protesters called on the government of Prime Minister Sheikh Hasina to make good their losses and to sack the chairman of the Bangladesh Securities and Exchange Commission.

"We get frustrated and angry with the capital markets," said Ataullah Naim, who lost two-thirds of his savings in the market slide.

For the moment the government's intervention appears to be working. Shares have rallied slightly, after authorities took steps to discourage market players from selling shares and to encourage institutional investors to buy more instead.

Via the Dhaka exchange, the securities commission last week instructed brokers to confirm stock sale orders in person rather than online or over the phone.

Brokers say clients are complaining but complying by coming in or sending in representatives. "People are fed up," said an employee of Dragon Securities in Dhaka.

The securities commission has also reminded brokers and merchant banks about the agency's official code of conduct.

Market observers say this was meant as a signal to provide full access to trading records and client data for a two-week probe into possible unusual trading that the commission announced at the beginning of that week. The commission is said to be reviewing the records of 50 top investors, 20 brokers and 20 merchant banks involving as many as 2,000 investors.

"We are watching to see if sales orders are being made according to the rules," Saifur Rahman, SEC executive director for surveillance, told the Nikkei Asian Review on Wednesday.

Meanwhile, the Bangladesh Bank, which both regulates the financial sector and is the country's nominally independent central bank, contacted 20 banks whose stockholdings were below the regulatory maximum level to urge them to buy more shares in the market.

Confirming the request, a central bank official said the regulator had eased rules that restricted banks' investment firepower. In May, it issued a notice that unlisted investments would no longer count against exposure limits.

"This has created room for investments," he said, while acknowledging banks might still hesitate to buy heavily. "Those who invest will have to take risks."

Syed Mahbubur Rahman, managing director and chief executive of privately owned Dhaka Bank, told Nikkei his institution had not received any directive from Bangladesh Bank and said that it would not be buying more stock.

Yet other banks are on board. Mohammed Haider Ali Miah, managing director of Exim Bank, another private lender, said the country's banks would support Bangladesh Bank's initiative.

"We, the banks, will take steps to improve the share market," he told Nikkei.

Asian Tiger Capital Partners Investments, a local investment bank, welcomed the government's interventions but was not yet ready to wade back into the market.

"We are conservative about buying and selling right at the moment," said a fund manager there. "We have funding constraints."

Amid the flurry of market inventions since July 22, the Dhaka Broad Index has recovered about 4% and some observers believe the market has turned a corner.

"Even many good shares are underpriced," said A.B. Mirza Azizul Islam, a former finance minister who now teaches economics at BRAC University in Dhaka. The earlier sell-off had gone too far, he said, because of "herd behavior."

Nevertheless there are those who warn still more needs to be done.

Beyond stabilizing the market, both investors and analysts say officials need to pay more attention to the long-term development of the country's markets to help sustain rapid economic growth.

A cash infusion last year from China's two main stock exchanges, who together took a 25% stake in the Dhaka bourse, has so far failed to deliver the hoped for boost in investor interest in Bangladeshi stocks.

The state of Bangladesh's investment environment "certainly needs to be enhanced," said Manmohan Parkash, country director for the Asian Development Bank in Dhaka.

Naim, of the protesting investors' group, is counting on the prime minister to come up with more substantive measures after her return this week from an extended overseas trip. "We are now taking a wait-and-see approach," he said.