THIMPHU -- For nearly three decades, the Royal Securities Exchange of Bhutan was a sleepy place.

Some stocks had not been traded since their market debuts. The market was closed more of the week than it was open. Volumes were so sluggish on South Asia's smallest exchange, no one even saw a need for an index.

But the Land of the Thunder Dragon is stirring as incomes rise. With limited investment options to choose from, the country's expanding middle class has turned to stocks, spurring a trading boom that has been only partly dampened by the coronavirus pandemic.

"I had been watching the stocks for a few years and I noticed that share prices of some kept going up," said Karma Yezer, a lecturer with the Gedu College of Business Studies in western Bhutan who invested in a number of listed insurers in March.

"With my income rising, investing in land would have been the best option but that requires huge capital whereas investing in stocks is much simpler and returns are higher than with bank savings (accounts)," he said. 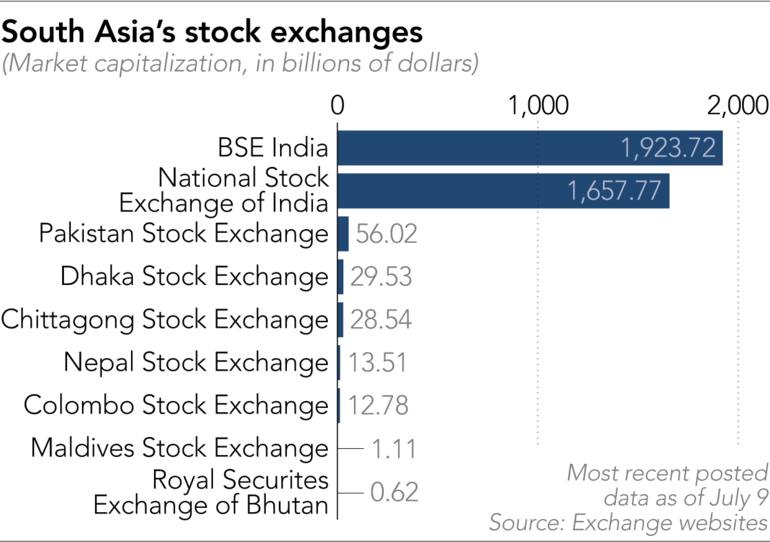 Last year, Bhutanese traded 1.3 billion ngultrum ($17.41 million) worth of shares, tripling the level of 2018 when the Royal Exchange open first opened the way for online transactions.

Over the past three years, the number of active traders has quadrupled since 2017 to 1,700. That compares to a total domestic shareholder base of around 70,000, around a tenth of the overall population. In the same period, the market's total capitalization roughly doubled to 50.91 billion ngultrum.

To serve the growing interest in stocks, more brokerages have opened. Nubri Capital, the country's first fund management company, turned its first "substantial" profit in 2019 after seven years in operation, according to Chief Executive Pema Thinley.

The Royal Exchange, meanwhile, has extended trading hours to five days a week from three and launched its first benchmark index on New Year's Eve. The number of active stock traders in Bhutan has quadrupled over the past three years and more brokers have opened. (Photo by Phuntsho Wangdi)

Most global stock benchmarks fell further when coronavirus fears were at their height but have also bounced back more emphatically. Bhutan's market is relatively insulated from global market moves as foreign investment into the country's stocks is banned.

The pandemic has had limited direct impact on Bhutan, with all 80 COVID-19 cases detected so far all involving nationals returning from the Middle East and other overseas locations. But the outbreak has had a huge impact on the economy, with Indian demand for the country's raw materials and products disappearing along with foreign tourists.

The affected sectors, however, are not well-represented among Bhutan's 18 listed companies. Financial institutions, led by Bhutan National Bank, account for some 70% of the exchange's market capitalization. A jump in the amount of funds set aside for possible credit losses due to slowing economic momentum last year and announced in February brought down profits for the bank and its peers.

Chencho Tshering, who runs a graphic design company in Thimphu, began buying stock in banks and insurers about two years ago after getting acquainted with the Royal Exchange while filling an order for the bourse. With business for his company and others now slow, he has sold some of his holdings at a loss.

"The economic slowdown means there is less money in the economy," he said. Overall, trading volumes have declined about 30% since the COVID-19 outbreak began and the exchange's market cap has slipped to around 46 billion ngultrum. To brake downward momentum, the exchange has narrowed maximum daily movements for each stock to 2.5% from 5% and raised the minimum share block size for trades.

So far, most of Bhutan's new stock investors are staying in the market.

"Since share prices are falling, I have invested in the stocks of some financial institutions as I believe their prices will increase once the current situation is over," said Rinchen Wangdi, a bank teller in the southern town of Gelephu.

"Earlier I thought investment in shares was only done by people and companies with large amounts of money," he said. "Only recently I learned from friends that shares can be affordable and I watched YouTube tutorials to learn more about the market. Our stock market is small and has a lot of room for growth so I feel investing in it is always a good choice."

Amid rapid economic growth, gross national income per capita in Bhutan has risen 50% over the past decade to more than $3,000, leaving many with spare funds to invest. Seeing opportunity, the Royal Exchange launched a public awareness campaign and upgraded its systems to make company filings and real-time data available online.

But the Royal Exchange has made less headway on other goals in its draft 10-year strategic plan, which runs through 2027. These include allowing foreign investors to buy shares, developing a mutual fund industry and enlivening the exchange's pipeline of initial public offerings by drawing listings from energy and other unrepresented business sectors, from state companies undergoing privatization and from overseas.

The government has not prioritized the legal changes needed for these reforms, nor pushed ahead with privatizations, however. Total listings have come down from a peak last year of 22 since the government declined to renew several mining licenses, leading to the delisting of the whole sector.

Companies holding IPOs are now eligible for a five-year corporate tax holiday, but only one has taken advantage so far. Trading company Sherza Ventures raised 64 million ngultrum in 2019, far short of its targeted 247 million ngultrum. The shares now trade about 20% above their IPO level.

"We are used to the way we have done business and the benefits of listing are not clear," said Phub Zam, president of the Bhutan Chamber of Commerce and Industry and managing director of the Yarkay Group, a conglomerate involved in hospitality, construction and real estate.

Companies like Yarkay have so far been able to get the capital they need from banks. And in contrast to the low demand for listings, the Royal Exchange has welcomed several startups onto a crowdfunding platform it launched last year with Bhutan's central bank.

Dorji Phuntsho, chief executive of the Royal Exchange, is optimistic that the exchange will catch on with companies, not just investors.

"The way business is being done in Bhutan is slowly changing and more companies will prefer listing to source funds, grow and become resilient," he said.