TOKYO -- The Cambodia Securities Exchange, one of the world's smallest securities markets, is set to launch a number of measures to attract foreign investors and improve liquidity.

"Singaporean, Malaysian, maybe Korean investors, and Chinese investors, would like to invest in our exchange," which will be easier with reduced impact from time differences, said Vice Chairman Ha Jong-weon.

From next year, the exchange is also planning to allow custodian banks to trade on behalf of foreign investors with assets in the country. The Cambodian government recently issued regulations governing custodian functions.

The CSX, which currently has five listed companies, was set up as a joint venture between Cambodia's Ministry of Economy and Finance and Korea Exchange, and started trading in 2012.

But the body has struggled to attract initial public offerings, and could face further headwinds from the Stock Exchange of Thailand's plan to create a regional board.

To facilitate trading for foreign investors, the CSX started experimenting with mobile trading in June.

"Our trading value would increase rapidly," in about a month, Ha said. ASA, the parent company of leading Cambodian lender Acleda Bank, is set to list 68 million shares on the exchange. 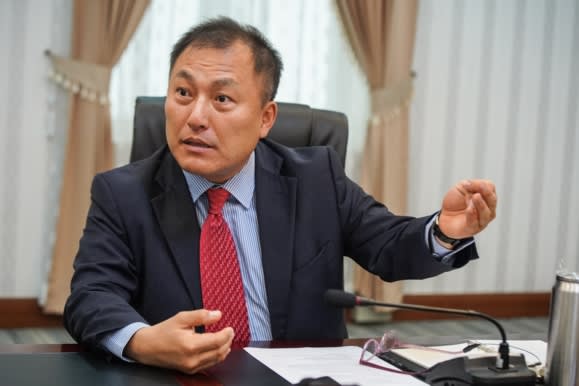 CSX Vice Chairman Ha Jong-weon said that attracting IPOs from abroad was "not a priority." (photo by Masayori Ishikawa).

In an effort to increase the number of listed companies, the CSX is now approaching microfinance institutions, commercial banks and securities companies. There are more than 70 financial institutions in Cambodia.

Unlike other companies that "need more time," financial institutions are "audited by accounting companies and they pay taxes [appropriately]" and "their company situation meets our criteria," according to Ha. As interest rates in Cambodia are typically in double digits, "their profit is so good," he added.

The exchange is also in talks with the National Bank of Cambodia, which is responsible for approving institutions wishing to list.

There are Chinese and Taiwanese businesses that want to list on the CSX, but attracting foreign companies is "not my priority," Ha said. Those companies, he contended, were more interested in the publicity value in relation to their operations in the country.

Ha, who has 26 years of experience at the Korea Exchange, insisted the CSX had a "bright future." Companies including garment manufacturer Grand Twins International and Sihanoukville Autonomous Port are among the five currently listed.

"Good companies are listed on our exchange but they are not valued fairly," Ha said. "If I were an investor I would like to buy this one, but nobody knows about this kind of situation."

Ha has made trips to countries including South Korea, Thailand, the Philippines, Malaysia and Singapore to promote the market to institutional investors.