A SoftBank mobile IPO would pose a tricky debt question

TOKYO -- SoftBank Group's putative plan to take its Japanese mobile phone unit public has gotten a mixed reception in the fixed-income market, where some worry about the possible loss of the core subsidiary as a bond guarantor and the impact that would have on the parent's credit rating.

The Nikkei reported Jan. 15 that the Tokyo-based company, led by tech evangelist and serial investor Masayoshi Son, aims to list about 30% of shares in SoftBank Corp. on the Tokyo Stock Exchange in a sale that could raise around 2 trillion yen ($18.4 billion), which would put it among Japan's biggest-ever initial public offerings.

Such a move would diversify funding streams and decrease the group's reliance on ever-mounting debt -- the kind of fiscal health consciousness investors typically welcome.

But for SoftBank Group's widely held bonds, prized for their juicy yields, the situation is less than straightforward. The cash cow mobile unit serves as a guarantor on debt issued by the parent, helping investors buy with confidence. SoftBank Group has issued, in yen-denominated debt alone, about 2 trillion yen in such guaranteed, straight bonds.

This arrangement would likely be a focus of a TSE review of a mobile unit listing. The bourse looks into whether subsidiaries set to go public operate with autonomy and do not merely serve the parent's interests, from the perspective of protecting minority stakeholders.

"In the case that a newly listing company guarantees the debt of its owner, the majority stakeholder," the TSE "demands the guarantee be removed," said a person with knowledge of the exchange's policy. 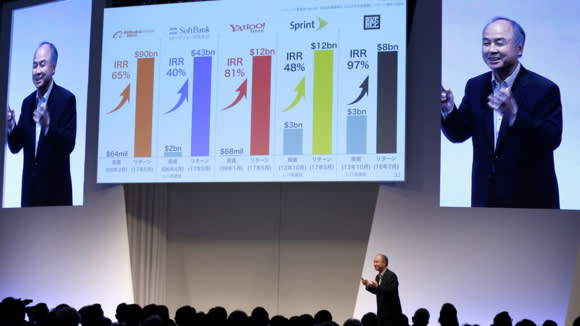 The TSE's tough stance has players in the corporate bond market concerned that "should SoftBank's mobile unit go public, it would very likely become difficult for the unit to guarantee the parent's debt," in the words of Toshihiro Uomoto at Nomura Securities.

The absence of that guarantee would create pressure to downgrade debt issued by SoftBank Group, bond market watchers say. The company has a long-term issuer rating of A- from the Japan Credit Rating Agency. In the market's worst-case scenario, if the group were downgraded to BBB, it could trigger a selloff in outstanding debt.

For now, there is little sign of that happening. Two gauges of investor perceptions of SoftBank Group's creditworthiness -- credit default swaps and the spread between yields on SoftBank debt and those on comparable Japanese government bonds -- have stayed largely flat since reports of the listing plans surfaced.

"Even if investors have concerns, it isn't easy to part with attractively high yields," says an official at a Japanese investment advisory firm.

But as long such uncertainty remains, SoftBank Group bonds could jerk unpredictably in response to moves by the company.

A spokesperson said that in the event of a subsidiary's listing, maintaining that unit's independence would be a focus of accompanying inspections and adjustments would be made accordingly. Different ratings institutions view ratings differently, the spokesperson added.