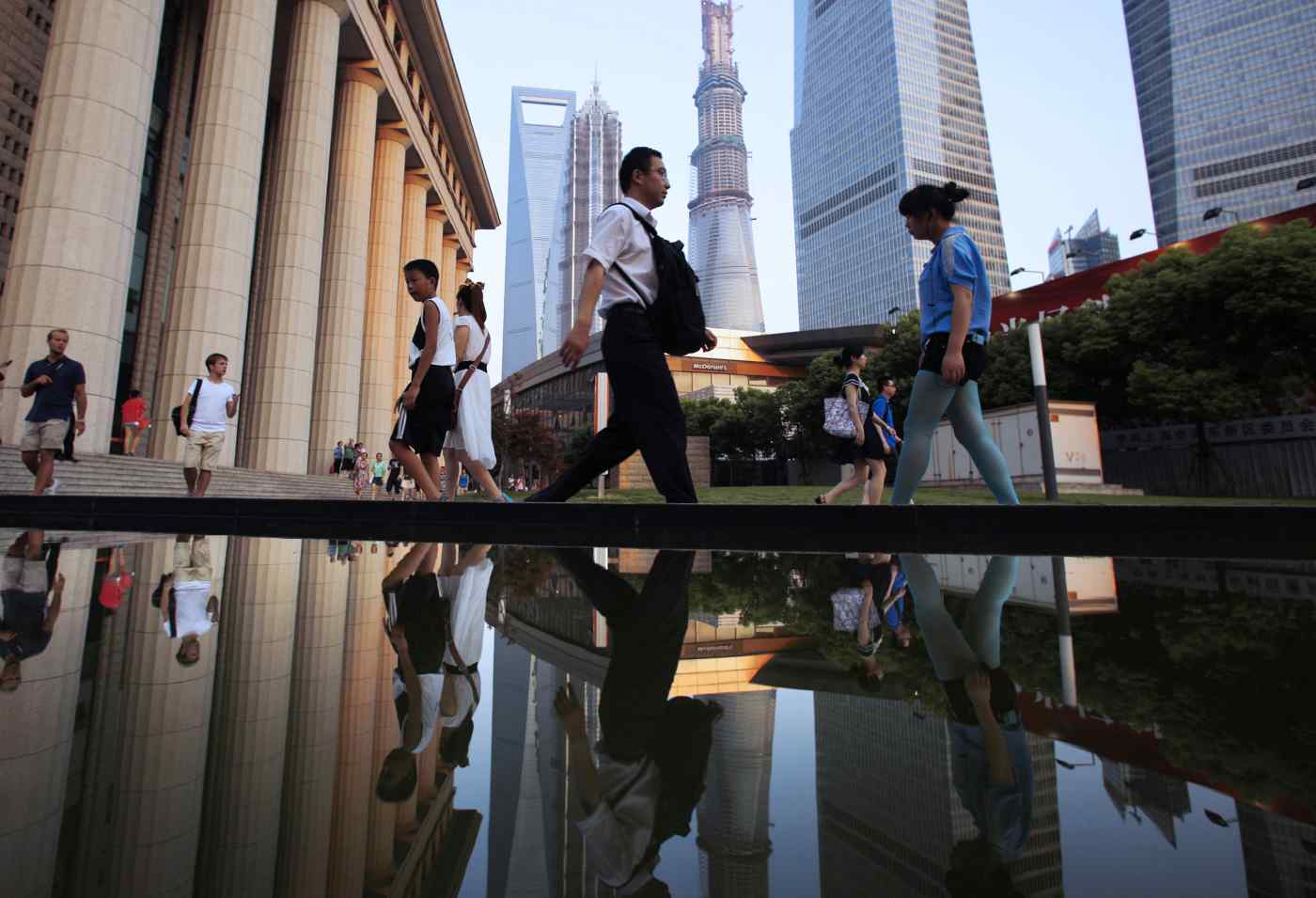 HONG KONG -- Hedge funds focused on Chinese stocks were big winners in 2017, returning 35% according to data from eVestment, a data provider owned by Nasdaq, the U.S. financial services group. Returns were substantially higher than the global hedge fund average of 9%, and easily outpaced a 19% upswing in the S&P 500 benchmark index in the U.S.

It is not yet clear, however, whether these stellar returns reflect astute judgments by managers or the underlying strength of Chinese stocks, which hit an 18-month high in June following MSCI's decision to include them in its global benchmark equity index for the first time. Increasing global tensions over trade may provide an answer.

The Chinese hedge fund industry includes funds domiciled in both China and Hong Kong. But many differ from hedge funds in Western countries, avoiding sophisticated strategies such as shorting the market -- betting on falling stock prices by borrowing shares from brokers and selling them at the market price with the intention of repurchasing them later at a lower price.

The majority of Chinese-domiciled hedge funds are "private investment funds" distributed to qualified private investors, who are deemed to have sufficient capital and understanding of the risks involved. Many do not short stocks, adopting long-only strategies, buying and holding stocks in the expectation that prices will rise. Others adopt long/short strategies intended to minimize exposure to market volatility, or focus on futures-based funds.

"The [Chinese] market is still, in terms of valuation, lower than the U.S. or Europe, so the fundamentals are really there to support this bull market," Jiang said.

Theodore Shou, director of Skybound Capital, a Hong Kong-based hedge fund manager, said many Chinese equity managers "can deliver alpha [investment returns above a suitably comparable index] in the longer run, because their hunting ground is wide and not so efficient."

However, there are some signs of waning enthusiasm for equity-focused Chinese hedge funds. Globally, investors allocated an extra $14 billion to hedge funds in January, marking the industry's best start to a year since before the 2008 financial crisis. China-focused funds received some of the largest new allocations -- but most of the investment went to funds concentrating on debt-focused strategies. Equity-focused funds suffered substantial redemption demands, eVestment said.

Kenneth Heinz, president of U.S.-based Hedge Fund Research, noted that a combination of factors contributed to China managers' outperformance in 2017, including stock selection and tactical exposure adjustment, as well as positions in currencies, commodity fixed income trades and merger and acquisition deals.

Such comments suggest that Chinese hedge fund performance is closely linked to overall sentiment. Shou said it was not necessarily individual portfolio managers that had delivered good performance in 2017, but the overall market direction. The MSCI China index, for example, rose 54% in 2017, boosted by large stocks such as Tencent Holdings and Alibaba Group Holding that more than doubled in price over the year. These two stocks account for a third of the index.

Overall, however, Chinese hedge funds significantly under-performed the index, mainly because few managers were able to allocate large sums to investments in these big-name stocks because of risk allocation constraints. "There were property and auto names that went up multiple times within the year [but] managers would have needed to tilt very heavily toward these sectors to outperform," said Shou. 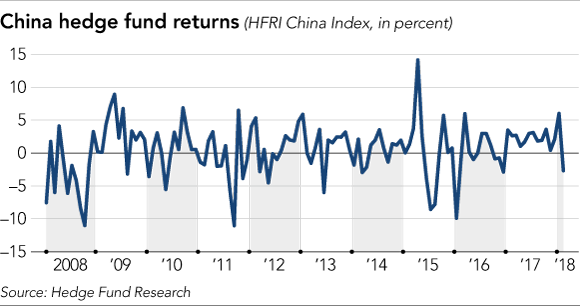 Few Chinese hedge fund managers have much experience of market peaks and troughs. "It would be very rare to see a manager globally start with less than 10 years of experience, but it's quite common in China," said Richard Johnston, Asia managing director of Albourne Partners, a London-based global hedge fund adviser. In this sense, the Chinese market resembles that of the broader Asian hedge fund industry 10 years ago, Johnston said.

While the market is white hot, many are flocking to join hedge funds, but they lack the experience needed to navigate out of a market slump, said Jiang. "This segment of the economy is mind-blowing," he said. Referring to Alibaba's chairman and founder, he added, "Everyone wants to be the next Jack Ma. But do they know how to manage money in a downturn? No."

Data from HFR, a U.S.-based provider of hedge fund data, shows that despite its relative immaturity, China's hedge fund market accounts for more than 30% of the Asian total by number of funds -- 360 of 1,161 funds -- excluding so-called "sunshine" funds that are not defined as hedge funds by the Chinese securities regulator and may have as little as $50 million under management.

Several of the larger hedge funds now have more than $1 billion in assets under management, including institutionally-focused managers such as Hillhouse Capital Group, founded by Zhang Lei, which was one of the first funds to back Chinese e-commerce companies such as Tencent and JD.com.

Another group combines elements of these two approaches, led by Greenwoods Asset Management and CSV Capital Partners, both headquartered in mainland China. CSV's China Opportunities Fund was the top Chinese performer in 2017, with gains of 108.8%, according to Eurekahedge, a hedge fund data provider owned by Japan's Mizuho Bank. Greenwoods' Golden China Plus Fund was second in the rankings, at 70.2%, while its China Healthcare Fund was next in the list on 60.1%. 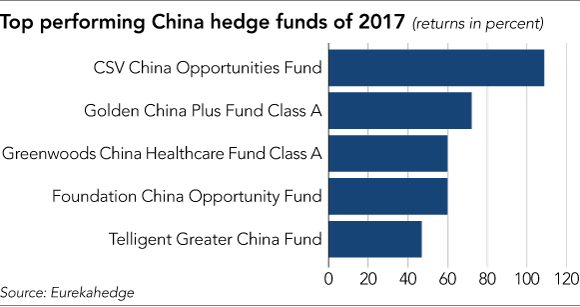 George Jiang, Greenwoods' founder and chief investment officer, is a value investor with a strong long-term track record for his investments in China equities. The group also has a large operation in Hong Kong, managing equity long/short strategies that trade Hong Kong or U.S. stocks. Both operations are run by managers originally from mainland China.

CSV Capital Partners, founded in 2004, is based in Shanghai and is part of a larger private equity firm specializing in early stage investments in the internet, environmental and the life sciences sectors. Founder Earl Yen spent over 11 years at Citigroup and Bear Stearns, where he was a senior investment banker in Asia.

However, few Chinese hedge fund managers have the sort of experience available to Greenwoods and CSV, suggesting that the next few months may mark a turning point for returns if global tensions over trade continue to worsen.

Chinese hedge fund returns fell by 2% in February, marking the first monthly loss in 16 months, and ending the sector's longest rally since 2003-2004, eVestment data showed. But many observers think that China's hedge fund managers will cope adequately with the changing market conditions. "They learn very quickly, and they are coming up fast," said Johnston.