Benchmark indexes in China, South Korea and Malaysia dip over 2% The reaction was most pronounced in the stock market. The Tokyo Stock Exchange ended morning trading with a clear drop as the benchmark Nikkei 225 Index fell by 400 points, or 1.8%, to 21,958 yen.

China's SSE Composite Index, South Korea's Kospi, Malaysia's KLCI, Singapore's ST Index, and Vietnam's VN Index were all down over 2% at one stage. The benchmark indexes of Hong Kong, Taiwan, and the Philippines fell over 1%.

The global sell-off was sparked by developments in the Italian bond market. The country's two-year bond yield jumped to 2.4% from 0.9% the previous day. The yield had been in negative territory until mid-May, but began rising as the country's political crisis worsened. 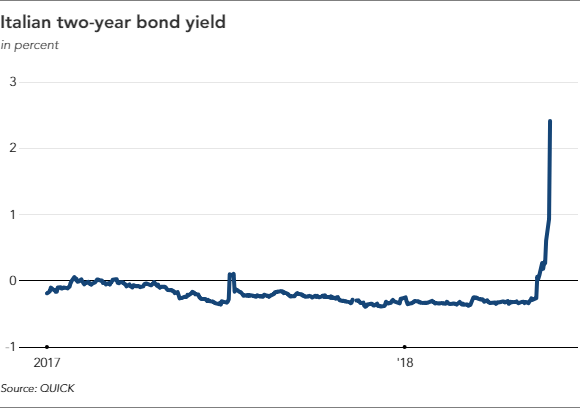 Italy could hold snap elections as early as July after an attempt to form a government was rejected by President Sergio Mattarella.

"If there is an election coming, it would mean a de facto EU referendum for Italy," warned Mizuho Securities economist Takako Sano.

The political situation elsewhere in the Eurozone has added to investor fears. Spain's Prime Minister Mariano Rajoy faces a confidence vote on Friday on the back of corruption allegations.

But the reasons behind the downturn are not limited to Europe. "Investors could not rely on the U.S. as the last resort," said SMBC Nikko Securities' chief market economist Yoshimasa Maruyama. U.S. President Donald Trump on Tuesday reiterated that Washington would continue to pressure China on trade, resulting in another source of uncertainty.

Developments in Europe are adding further complexity to a market that is already difficult to read.

Many Asian investors are anxious about a possible outflow of capital that could result from the expected normalization of monetary policy in the U.S. and Europe. "Now that we've seen the initial reaction, it's difficult to foresee how investors would take it from here," said Toru Nishihama, chief economist at Dai-ichi Life Research Institute in Tokyo.

"If political uncertainty persists in the U.S. or Europe, the Federal Reserve or European Central Bank may become hesitant to further taper or raise rates. Asia may experience less outflow [than expected]," he added.