HONG KONG -- E-cigarette maker RLX Technology plans to raise as much as $1.2 billion in an U.S. initial public offering this week as Joe Biden takes office following a string of moves by Washington to discourage investment in Chinese stocks.

"There is a belief the Biden administration may take a softer touch toward regulatory issues," said Andrew Collier, managing director of Hong Kong-based Oriental Capital Research. "That is prompting companies to still go ahead and sell shares in the world's biggest capital market."

"An e-cigarette company is a consumer company, and both the issuer and investors assume they won't run into any hurdles," said Collier, previously the president of Bank of China International USA.

An executive order from President Donald Trump that came into effect last week bars investment in the securities of companies judged to be linked to the Chinese military. As a result, the NYSE suspended trading in the shares of state-run telecommunication companies China Mobile, China Telecom and China Unicom.

Collier noted that the issue of access to the audit records of Chinese companies listing in the U.S. also remains a sore point. Under a law passed by Congress last year, Chinese companies could be kicked off American exchanges next Jan. 1 unless a deal is worked out with Beijing to allow access to their audit records. Citing national security, Beijing forbids such reviews. 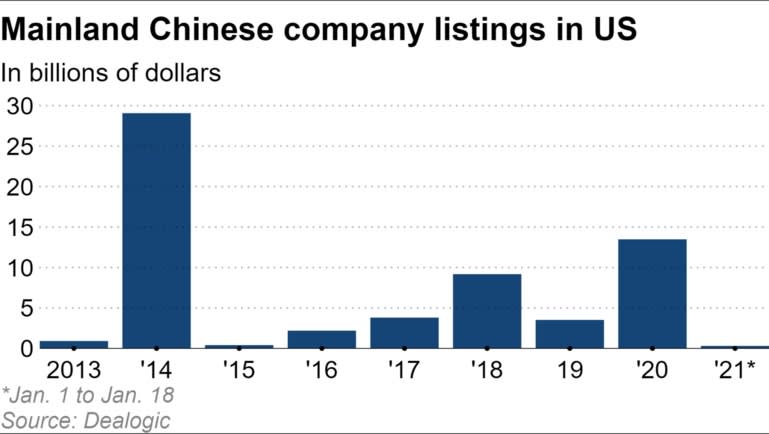 RLX's NYSE debut, now set for Thursday, highlights the attractiveness of U.S. capital markets as a fundraising platform for Chinese companies despite the rise of Hong Kong, Shenzhen and Shanghai as alternatives.

Three Chinese companies already have raised a combined $315 million since Jan. 1 through New York IPOs. Last year, 35 mainland companies sold shares $13.5 billion of shares in the U.S., the biggest sum since 2014, according to Dealogic.

Still, bankers are not yet expecting a rush of Chinese companies to U.S. exchanges while the stance of the new U.S. administration toward Beijing remains unclear.

Some companies are willing to take a "calculated risk" by selling shares in the U.S., a Hong Kong-based equity capital markets banker said, adding that if they were forced to delist, they are confident of finding a home in Hong Kong or Shanghai, using their U.S. trading record to set a floor price.

"A U.S. listing gives the companies an avenue to raise plenty of capital at attractive valuations and at the same time, showcase their credentials by trading in the U.S.," he said.

"While the pipeline is still growing, we are seeing some trepidation with companies eager to see how Biden will approach the issues at stake," he said. "We will still see deals, but events in the coming days and weeks will determine the pace."

As of October, there were 217 Chinese companies, with total market capitalization of $2.2 trillion, trading on American exchanges, according to the U.S.-China Economic and Security Review Commission.

Search engine operator Baidu, Tencent Music Entertainment and online retailer Vipshop Holdings are among the New York-listed Chinese companies lining up to establish a backup position on the Hong Kong Stock Exchange. Since November 2019, when Alibaba Group Holding sold shares in Hong Kong, 10 U.S.-listed Chinese companies have raised $30 billion in the territory, according to data compiled by Refinitiv.

Other Chinese technology companies, such as short-video platform Kuaishou Technology, have picked Hong Kong for their IPOs over U.S. exchanges, wary of the uncertainty from an American listing.

Kuaishou, which is aiming to raise as much as $5 billion, will open its IPO for subscription on Jan. 26 and is expected to list in early February, just ahead of the Chinese New Year, two people familiar with the plans said. 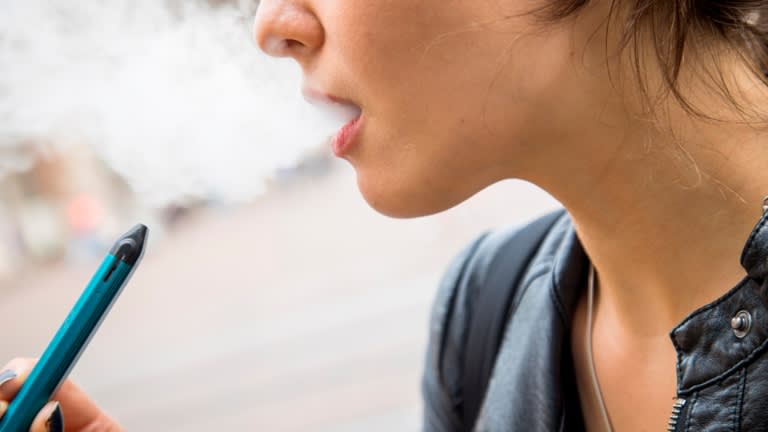 RLX Technology, founded in 2018, is China's largest e-cigarette maker. Its offering comes amid a ban on U.S. investors trading in securities of companies with links to the Chinese military.   © AP

RLX, founded in 2018, is China's largest e-cigarette maker and counts the Chinese arm of U.S. fund Sequoia Capital as a key backer. Its revenue in the first nine months of 2020 stood at 2.2 billion yuan ($339.4 million) compared with 1.14 billion yuan in the same period a year earlier. It reported net profit of 109 million yuan in the nine-month period, according to its prospectus.

Shares of Chinese vaping device maker Smoore International Holdings, a competitor of RLX, jumped 150% on their debut in Hong Kong last July. Its shares closed at HK$71.65 on Monday, compared with an issue price of HK$12.40.

With an estimated 286.7 million adult smokers in 2019, China has the potential to be the world's largest vaping market, RLX said in its prospectus. However, vaping products there have just a 1.2% penetration rate, compared with 32.4% in the U.S.

"Those already invested in big tobacco and cannabis names are potential RLX investors," he said. "Besides such cases, I think Hong Kong is now a very compelling venue for Chinese biotech and technology listings."