The Big Four banks reported that the balance of bad debt stood at 999.1 billion yuan ($152.5 billion) at the end of December, up 181 billion yuan from a year earlier.

"The nonperforming debt stems mainly from the manufacturing, wholesale, retail and service sectors," Zhang Xuguang, an executive vice president at Agricultural Bank of China, said during a teleconference.

The average ratio of bad debt among the four banks rose 0.14 point from the end of 2019 to 1.54%, marking the first uptick in four years. Losses from bad debt rose 16% collectively, which put downward pressure on earnings.

Nevertheless, the Big Four all boosted profit last year thanks to the country's economic growth. Industrial and Commercial Bank of China, the world's largest bank by assets, saw its net profit soar 44% in the fourth quarter of 2020. That performance helped its full-year profit rise 1.4%.

China has been cited as the most successful among major countries in reining in the coronavirus epidemic, with its economic normalization driven by exports and fixed-asset investments such as real estate and infrastructure.

But the economic benefits hardly spilled over to microbusinesses. Localized coronavirus outbreaks between December and February cooled consumer spending, and the slowed recovery dealt a blow to small businesses such as street-corner restaurants. 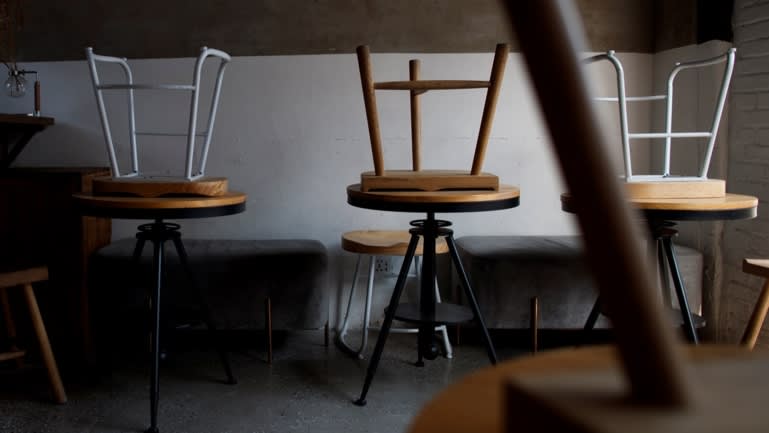 A shuttered cafe in Beijing last April: Small businesses have continued to struggle despite the economic recovery.   © Reuters

"The risk of asset deterioration is within manageable limits due to the sustained economic recovery," said Wang Jingwu, vice president at Industrial and Commercial Bank of China.

Many observers, however, are circumspect about the future outlook. U.S. credit-rating agency Moody's Investors Service cites lingering economic uncertainties and substantial risks to assets. In particular, the business environment for microenterprises remains challenging.

Meanwhile, the Chinese government has stepped in to support small businesses. A State Council executive meeting decided to extend deferrals on the principal and interest on loans through the end of this year. The measure, which was originally due to expire at the end of March, applies to up to 10 million yuan of credit.

The State Council also added items exempted from the value-added tax, granting tax relief to microenterprises. This underscores the government's aim to limit the fallout and stem the rise in bad debt. An idle Guangzhou sewing factory last April: The manufacturing sector is among the main sources of bad loans for Agricultural Bank of China.

On the other hand, "the basic conditions affecting companies have not changed," said Liu Jin, president of Bank of China. "If the grace period expires at the end of the year, there will be enterprises that will struggle to repay loans."

The amount of financing subject to repayment deferrals and other relief amounted to 7.3 trillion yuan last year, according to Fitch Ratings. Such loans to microenterprises accounted for 17% of the total.

Small rural commercial banks were able to slightly trim the ratio of nonperforming debts at the end of 2020 compared to a year earlier, but the lenders hold a large number of accounts that could potentially sour.

"Based on the analysis of borrower data and other sources, the actual amount of nonperforming debt is greater than the numbers disclosed by each bank," said Shinichi Seki, a senior economist specializing in China at the Japan Research Institute.

"Due to the novel coronavirus, household debt is growing at a high pace, which will have a huge impact if property values fall," Seki added.

China Construction Bank and the other three megabanks hold more than 113 trillion yuan in assets, up 50% in five years. If financing is extended to problem targets under the pretext of coronavirus relief, it would result in risks to the financial system.