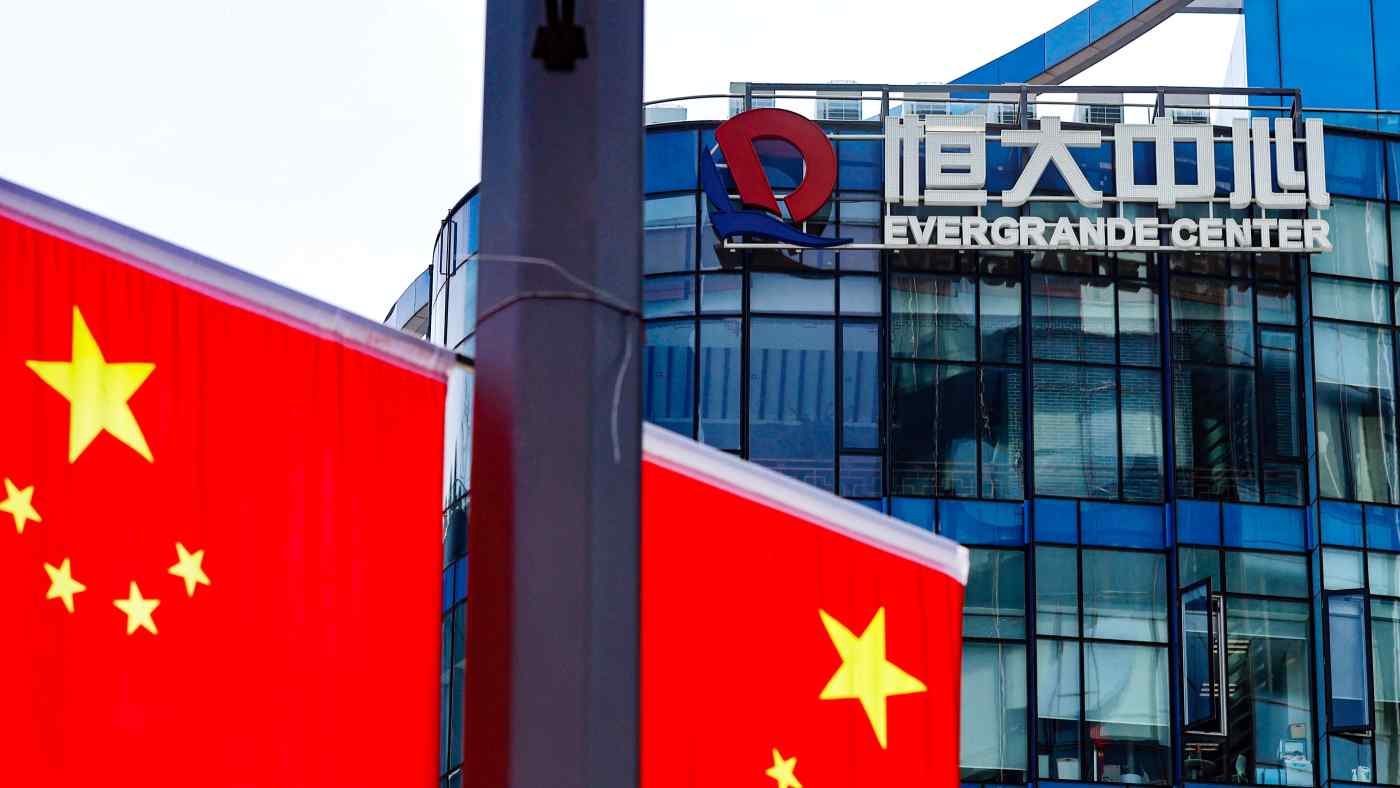 Property developer China Evergrande Group is attempting to step back from the brink of default but has already missed at least one interest payment on a bond.   © Reuters
NARAYANAN SOMASUNDARAM, Nikkei Asia regional finance editorSeptember 29, 2021 11:06 JST | China
CopyCopied

HONG KONG -- Embattled property developer China Evergrande Group has raised $1.5 billion in its first asset sale since revealing last month that it was in danger of a default.

However, the proceeds may not shore up its depleted liquidity, as they are expected to go toward settling bank debts, according to a statement on Wednesday from the developer.

The company, which has missed payments to banks, offshore bondholders, suppliers and retail debt investors, said it has raised 10 billion yuan ($1.5 billion) by selling a 19.93% stake in Shengjing Bank to a unit of the Shenyang city government. Evergrande has struggled to sell assets in the past few months and the transaction is the first publicly disclosed deal since the disposal of a smaller stake in the bank to the same buyer on Aug. 17.

"Shengjing Bank demands that all net proceeds from the disposal be applied to settle the relevant financial liabilities of the [Evergrande] group due to Shengjing Bank," the developer said in a statement announcing the sale.

Chinese business magazine Caixin said in May that authorities are probing Evergrande founder Xu Jiayin's relationship with Shengjing. It said the bank lent up to $20 billion to Evergrande through direct and indirect channels.

Evergrande, which is left with a 14.75% stake in Shengjing Bank, did not disclose how much it owed to the lender.

Evergrande shares rose more than 10% in early trade in Hong Kong though later gave up some of those gains to trade around 7% higher, while Shengjing Bank was little changed.

The group only said its own "liquidity issue" has adversely affected Shengjing Bank in a "material way," and that the involvement of a state-owned enterprise will help stabilize operations. The privately traded shares were sold for 5.70 yuan each, while the Hong Kong listed stock closed at 7 Hong Kong dollars.

Shengjing Finance Holdings, a subsidiary of the state-owned Assets Supervision and Administration Commission of the Shenyang People's Government, will complete the transaction, after receiving approval from the authorities, Evergrande said. On completion of the transaction, the Shenyang government will own a 29.54% stake in the bank and replace Evergrande as the largest shareholder.

The move by the government to add a 1.9% stake in August and signal its intention to increase the stake reassured investors. The lender's shares have fallen just 3.2% in the past month. Over the same period, Evergrande shares have lost 40%, while those of its electric car unit declined by 61% and its property management unit fell 21%.

Evergrande, whose liabilities exceed $300 billion, is attempting to step back from the brink of default. Longtime backers such as Chinese Estates Holding, which has been involved in every transaction by the group since 2009 and is the second-largest shareholder, are dumping their entire stakes in the developer. Evergrande's offshore bonds are being quoted at a quarter of their face value and the shares have lost four-fifths of their value this year.

The company missed a $83 million interest payment on a dollar bond last week, according to people familiar with the matter, and it faces a deadline for another payment of $46 million on Wednesday. There are several more interest payments due between now and late January.

Evergrande now has $7.7 billion worth of bonds maturing next year, according to financial data provider Refinitiv. The group said in a recent filing that it has total debts of 240 billion yuan due over the next year. That compares to bank deposits of 161.6 billion yuan.

The company in late August revealed for the first time it could default if it failed to attract investors or sell assets. It later said it had made "material progress" on the sale of assets, including stakes in units and its Hong Kong offices.

It also said declining confidence in the group had resulted in a "significant" drop in property sales, which are a primary source of liquidity for developers.

Another stretched Chinese developer, Fantasia Holdings, on Wednesday sought a halt in trading of its shares in Hong Kong, pending the announcement of a "substantial [asset] disposal."