China's Yongcheng and Unigroup survive despite series of defaults 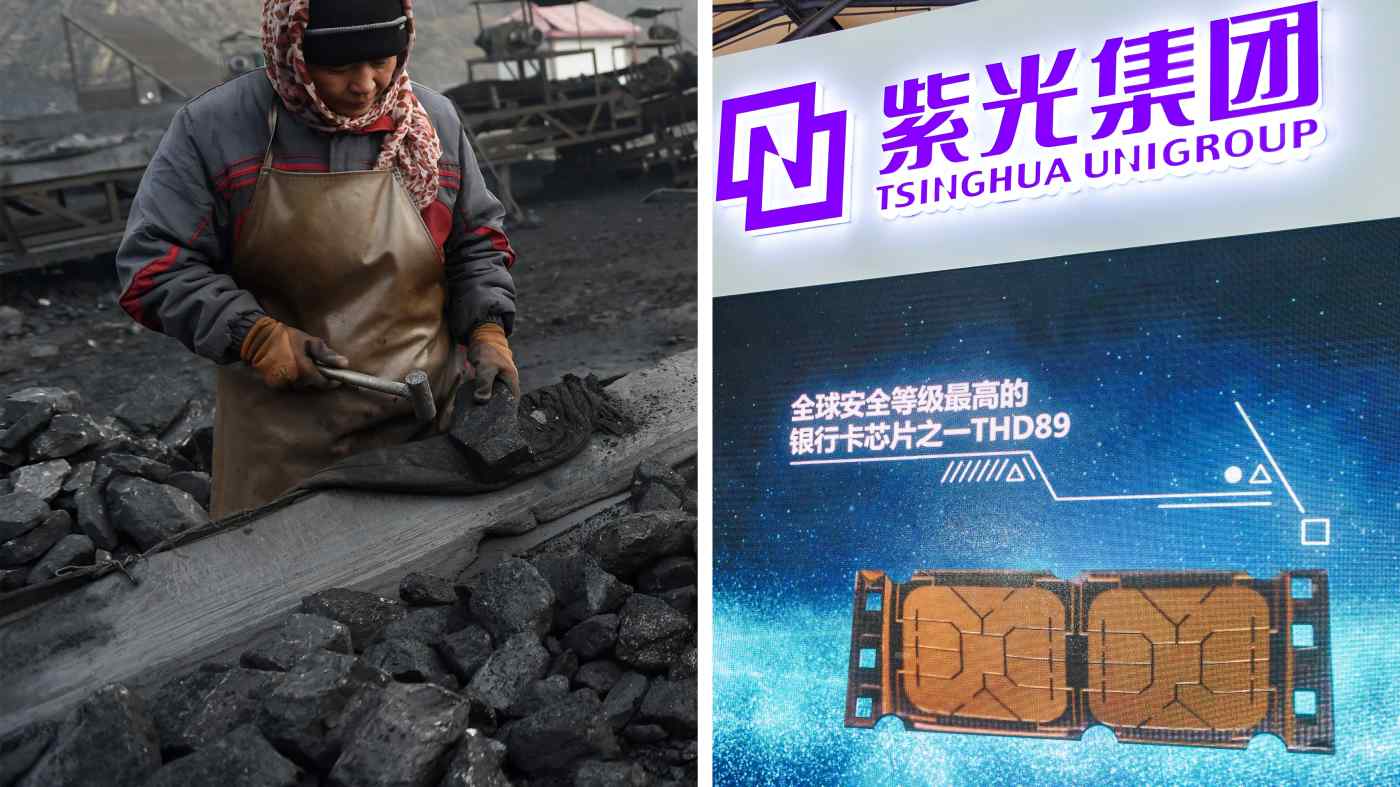 One problem for investors in China, an analyst says, is that officials in Beijing are not clear on what they will protect and what they won't. (Source photos by AP and AFP/Jiji)
KENJI KAWASE, Nikkei Asia chief business news correspondentFebruary 4, 2021 15:57 JST | China
CopyCopied

Chipmaker Tsinghua Unigroup is plagued by missed bond payments, while Yongcheng Coal & Electricity Holding Group continues to stay afloat amid waves of bond deadlines through closed-door meetings with its investors.

The state-owned coal miner in Henan Province stunned the domestic bond market with a default last November, and it has once again succeeded in effectively pushing back this week's deadline to pay back the principal and the interest for the three-year bond with a value of 2 billion yuan ($310 million). In an announcement on Jan. 29, all 48 holders of the bond unanimously agreed to a conditional extension proposed by the company.

The deal allowed Yongcheng to redeem only half of the principal and the interest this week and enables it to push back the deadline for the remaining half for 18 months. The coupon rate -- that is, the rate paid to investors by the company -- remains unchanged at 7.5% during the extended period. This means a modified bond worth 1 billion yuan will be due in August 2022.

That method of pushing back its payment deadlines has become a consistent maneuver for Yongcheng. The company has survived a series of deadlines by repeatedly asking holders of various bonds to accept revised deals for 50% paid upfront and 50% deferred. 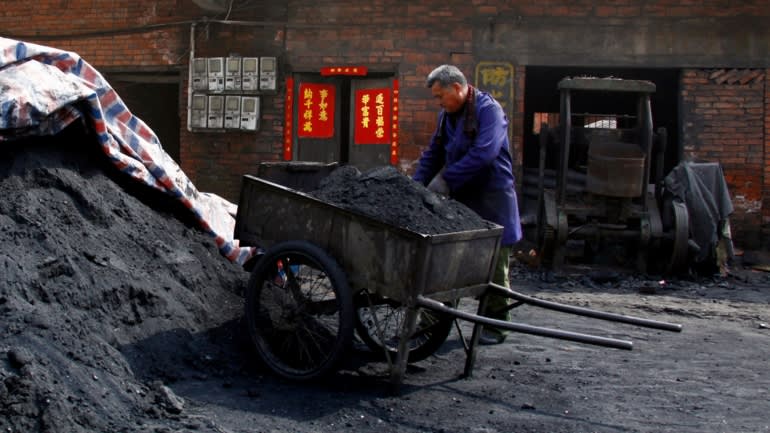 Coal miner Yongcheng's default last November was a wake-up call for many bond investors who were used to the government rescuing troubled state-owned enterprises.   © Reuters

The bar was a bit higher this time: The value of the bond was twice as large as its previous bonds and the tenor was more than three times longer than the other six deals that were rolled over. Still, the company won unanimous consent from bondholders, which was necessary in order to push through the agreement.

Yongcheng's parent company, Henan Energy & Chemical Industry Group, was found by the National Association of Financial Market Institutional Investors, or NAFMII, a government-supervised group for participants in the bond market, to have been misusing Yongcheng's cash.

Henan Energy has used a similar tactic to evade two bond deadlines: a $62.5 million dollar-denominated three-year bond on Dec. 28 and a 1 billion yuan four-year bond on Jan. 6. The bondholders have agreed to accept just half of the principal and interest upfront while postponing receipt of the rest until June 2022 and January 2023, respectively.

"The extension arrangement agreed upon will alleviate the company's debt redemption pressure to a certain degree," Henan Energy said in a statement in late December after reaching an agreement on its dollar-denominated bond. To be sure, that constitutes a default, since the original redemption conditions have been altered and the deadlines extended.

Both Henan Energy and Yongcheng have been suspended from issuing new fixed-income notes. As part of the unusual public censure handed down in mid-January by the NAFMII, Henan Energy has been barred for seven months and Yongcheng for a year. Banks, securities brokers, a rating agency and an accounting firm also were punished in their roles in the issuance of the companies' bonds over the years.

Through apologies issued separately by Henan Energy and Yongcheng as part of their punishment, both companies promised to improve their disclosures by making them "timely" and "accurate" while assuring investors that they would increase their cash flow.

Henan Energy pledged to prop up asset sales, while Yongcheng vowed to immediately stop providing funds to the parent's cash management system. Yongcheng said the parent has agreed to gradually return the cash, which was the main cause of its cash shortage and default.

Yongcheng's default last November was a clear wake-up call for many bond investors who were used to expecting a rescue from the government for troubled state-owned enterprises.

"Investors need to move away from [the] traditional mindset of support is always there," said Freddy Wong, head of the Asia-Pacific fixed-income division at Invesco in Hong Kong.

However, it is difficult to determine which companies get support. "SOEs' ability to get funding from the bank, [and] whether they are systemically important or not, is hard to gauge," he said.

Some analysts see the Yongcheng situation as a template for Chinese authorities in preparation for more troubles to come.

Chang Li, China country specialist at S&P Global Ratings in Shanghai, noted that "liquidity and refinancing risk continue to be a challenge" for Chinese companies this year, but penalizing Yongcheng, its parent and the intermediaries will make the domestic bond market "more transparent [and] help restore the investors' confidence." 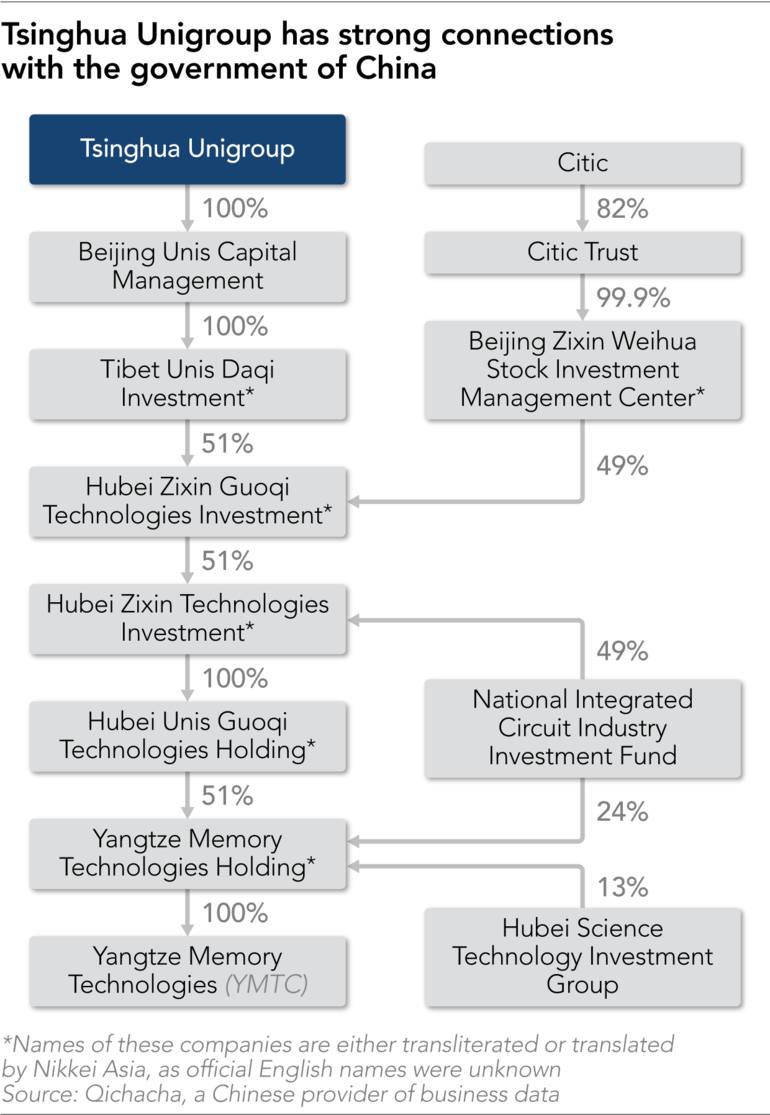 Meanwhile, Unigroup, the country's leading semiconductor manufacturer, is mired in a similar debt crisis, but its group companies remain operational.

The company, which is 51% owned by Tsinghua University, Chinese President Xi Jinping's alma mater, missed another redemption deadline for a $1.05 billion three-year bond on Jan. 29 and an interest payment on Jan. 25 of 30.66 million yuan for a five-year bond maturing in 2024. That follows two other bond defaults and a missed interest payment in December.

Unigroup said in a statement that it is a holding company and that its "group companies are operating normally." That is attributed to the group's complex capital structure, which involves powerful state-owned enterprises and government-affiliated investment funds.

As the diagram above shows, there are three joint ventures that stand between Unigroup and its key chipmaking unit, Yangtze Memory Technologies Co., or YMTC, according to Qichacha, a Chinese provider of business data. These joint ventures involve conglomerate Citic, the National Integrated Circuit Industry Investment Fund and an investment fund connected to the Hubei provincial government.

Even though Unigroup owns majority stakes in the three holding companies, its stakes do not exceed 51% and its control over them is limited, according to people familiar with the situation. Similarly, its ownership over Unisoc (Shanghai) Technologies and Unigroup Guoxin Microelectronics -- two other core semiconductor companies -- are both below 40%, and they are believed to have a degree of independence and be shielded from the direct impact of Unigroup's debt crisis.

More than 30% of Unigroup's yuan-denominated bonds are either held by or incorporated in wealth management products handled by domestic banks. These are held as a way to disguise loans, a legal practice, and banks tend to maintain their holdings even following defaults.

Richard Langberg, head of Asia-Pacific infrastructure and utilities ratings at S&P Global Ratings, noted that some borrowers "are taking advantage of this liquidity ... in order to help grow their way out of COVID, which China has done over a number of years."

What makes it difficult for investors is that government officials in Beijing do not articulate what they are protecting, unlike other emerging countries in Asia that Langberg covers.

"Chinese government [officials] -- unlike what we see in Indonesia -- haven't really made any announcements as to which sectors were important, which they will bail out, which they won't."