The coronavirus came on the heels of small businesses in China suffering from the economic slowdown in 2019 from the U.S. trade war, contributing to mounting nonperforming debt.   © Reuters
IORI KAWATE, Nikkei staff writerMarch 24, 2021 13:05 JST | China
CopyCopied

BEIJING -- China's small regional banks are fast approaching a surge of nonperforming debt that threatens to undermine the financial health of the vulnerable lenders.

As part of the country's coronavirus stimulus package, the government allowed small to midsized enterprises to defer principal and interest payments on loans. The extensions were applied to 6.6 trillion yuan ($1 trillion) as of the end of December, according to the China Banking and Insurance Regulatory Commission.

This break from debt servicing helped prop up small businesses, together with declining interest rates and relief from paying social insurance contributions.

However, the waivers from debt servicing expire at the end of this month.

"Nonperforming loans account for a higher ratio of debt subject to repayment deferrals than for normal debt," said Gu Shu, chairman of the Agricultural Bank of China, one of the big four state-owned banks.

Small businesses suffered when the Chinese economy slowed in 2019 due to the trade war with the U.S. The coronavirus unleashed a double whammy. Roughly 2.3 million companies failed in the first half of 2020, or 6% of the total, according to an analysis by the Peterson Institute for International Economics.

The government plans to extend debt payment waivers for microbusinesses, but it has not disclosed the scope of eligible businesses. There are lingering concerns that bad loans that were once hidden will rise to the surface once the March 31 deadline passes.

The Chinese banking industry shouldered a 3.5 trillion-yuan balance in nonperforming loans at the end of last year. If the debt payment relief ends, additional bad loans could grow as much as 700 billion yuan this year, according to a projection from China Securities.

Financial regulators are stepping up vigilance. Over 3 trillion yuan in nonperforming loans were disposed of last year, up more than 30% from the previous year.

"The amount of nonperforming loans that need to be disposed will likely increase this year," Guo Shuqing, chairman of the China Banking and Insurance Regulatory Commission, told reporters this month. Guo qualified that forecast by saying the body is still interviewing commercial banks.

China's five-year plan through 2025 contains a provision to improve mechanisms for identifying and disposing nonperforming loans. The goal is to avoid a scenario in which uncertainties from the pandemic and global economy spill over into the nation's financial system. 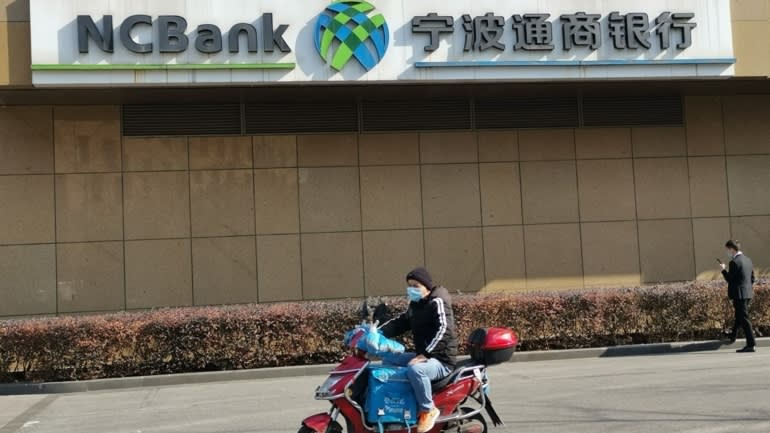 Expanding the capital base at small and midsized banks via multiple channels was declared as a major policy initiative for this year. The China Banking and Insurance Regulatory Commission and the People's Bank of China, the central bank, have recently allowed smaller banks to issue perpetual bonds with an equity conversion feature.

If a bank runs into financial distress, it can reduce the debt by unilaterally converting the bonds into equity without prior notice to investors. Once the bank restores its finances, the original bond investors are treated as shareholders and granted dividends.

As the name suggests, perpetual bonds carry no redemption date. That means the issuer only has to pay the interest, although the rates are expected to be set high. In terms of financial soundness, perpetual bonds take a back seat to common stock and retained earnings. But the bonds can be classified as core capital just the same.

Financial regulators have long allowed banks to issue other perpetual bonds, which often have triggers for writing off debt if the bank runs into financial distress. But investors have tended to shy away from perpetual bonds issued by small to midsized banks due to the institutions' weak capital foundations.

Convertible perpetual bonds help minimize the investment risk, granting a pathway for smaller banks to raise capital. Ningbo Commerce Bank and Zhejiang Chouzhou Commercial Bank -- both headquartered in Zhejiang Province -- have already issued the instruments in the interbank market. The scales of the fundraising are 500 million yuan and 1 billion yuan respectively.

Last year, the government took 200 billion yuan in proceeds from infrastructure financing bonds and injected the funds into small and midsized banks. In turn, critics have said that reliance on public funds leads to moral hazard.

"The use of public funds for recapitalization purposes should be a last resort," the International Monetary Fund said in a yearly report on the Chinese economy released in January.

Whenever an IMF report references public finances, the words tend to reflect the intentions of that nation's fiscal authorities. It is a widespread view that the earlier quote indicates the cautious stance of China's Ministry of Finance.

The response to the China's financial risks will require cooperation between the financial watchdogs and fiscal authorities. In 2018, the China Banking and Insurance Regulatory Commission and the People's Bank of China embarked on a campaign to deleverage debt, but the financing at private-sector enterprises suffered.

The PBOC sought to pin the blame on the finance ministry, deepening mutual distrust between the two sides.