Government could move to protect homebuyers ahead of lenders This is the question in Beijing and the financial corridors of Hong Kong as the world's most indebted property developer teeters on the brink of collapse. When it comes to Chinese banks, the consensus is that they will have to take big losses -- though how big remains uncertain.

"It's not too difficult to sketch the outline of an eventual solution," said Wei He, China economist at Gavekal Dragonomics. "The political priority is going to be to protect the homebuyers who have paid Evergrande for housing but have not yet received completed units. If the households which bought the properties and the companies building them are protected, it is financial institutions which will have to absorb losses."

Evergrande has 800 ongoing projects in China, with most apartments fully paid for. Over half the projects have been halted due to nonpayment to contractors. Evergrande shares have crashed 85% this year and its bonds are trading at 25 cents on the dollar. The company made a surprise announcement on Wednesday that it would make a bond interest payment on time on Thursday, but it is just a fraction of the $850 million in total coupon payments due this year.

Xu Jiayin, Evergrande founder and chairman, said in a letter to staff on Tuesday that the company is confident it will meet its responsibilities to customers, investors and lenders. "I firmly believe that with your concerted effort and hard work, Evergrande will walk out of its darkest moment [and] resume full-scale constructions as soon as possible," he said.

Evergrande's main lenders, led by China Minsheng Bank, have already set aside money to cover potential loan losses, according to two people familiar with the matter. The developer owes money to more than 128 banks and about 121 nonbanking institutions, according to a leaked letter written by Evergrande to the government late last year.

Besides Minsheng Bank, others most exposed to the developer include Agricultural Bank of China, China Zheshang Bank, China Everbright Bank and China CITIC Bank. Evergrande-controlled Shenjing Bank was also among the top 10, which were owed a combined 127 billion yuan ($19.6 billion) as of June 30 last year, according to the leaked letter.

Since then banks have cut their exposure, though none has publicly disclosed figures. 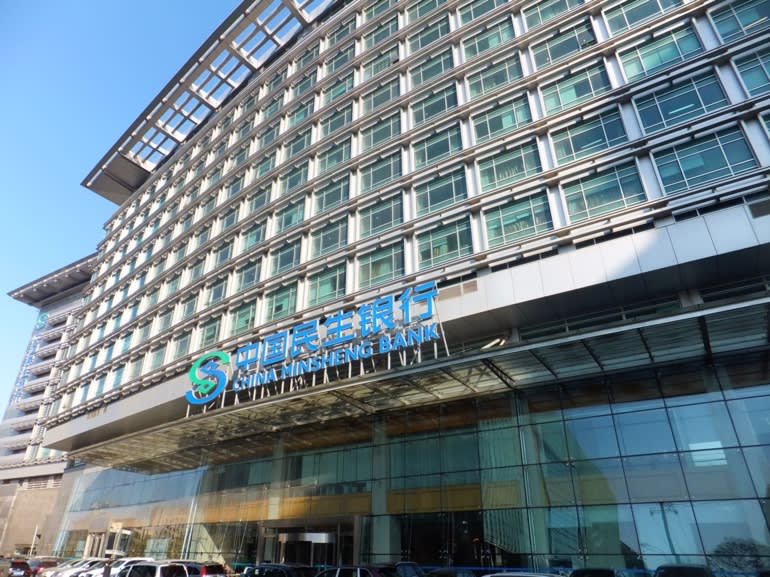 China Minsheng Bank is one of Evergrande's main lenders.

Evergrande, which is due to make bond coupon payments on Thursday, is fast running out of cash and has begun offering suppliers and retail debt investors discounted apartments, parking spaces and storefronts in lieu of missed payments.

So far, authorities have only summoned Evergrande executives and told them to cut debt quickly. They have not yet revealed plans for a bailout or a resolution, nor have they flooded the market with liquidity as they did in the past during times of property market stress.

Reuters reported earlier this week that Minsheng Bank, CITIC Bank and two other major Evergrande lenders were prepared to roll over some of the developer's near-term debt.

"We believe regulators may buy time to digest Evergrande's nonperforming loans by guiding banks not to withdraw credit and extend interest payment deadlines," said Citigroup analyst Judy Zhang. "During the grace period, Evergrande will liquidate good assets, look for strategic investors such as state-run companies, and seek debt restructuring, with the loss being shared by the whole system ultimately, and financial institutions and investors may take some haircut on principals."

Citigroup estimates that Evergrande's outstanding loan and bond balance is equivalent to just 0.3% of banking system assets, but a default that cripples other developers' access to credit would hurt the banking system. It estimates 40.7% of Chinese banks' assets are directly or indirectly related to the property sector, and any plunge in property prices could lead to a knock-on effect on banks' asset quality.

The Citigroup study calculated that 17 Chinese banks had 675 billion yuan in exposure to risky developers -- equal to 4.8% of their tier 1 capital, which is a measure of a bank's capacity to absorb future losses. Minsheng Bank, Ping An Bank and Everbright Bank were the most exposed, it said, equaling 27.1%, 12% and 9.2% of 2020 tier 1 capital respectively, Citigroup estimated.

Analysts and investors believe the capital and loan loss buffers built by the lenders will be enough to stave off a systemic crisis; not just from the fall of Evergrande but also from any spillover to the rest of the property sector. Authorities however have been more circumspect, with Guo Shuqing, chairman of the China Banking and Insurance Regulatory Commission, late last year calling property the biggest risk to China's financial system.

A critical question is whether Chinese banks have been conservative enough in preparing for a jump in bad loans. Commercial banks had set aside 5.4 trillion yuan in loan loss provisions at the end of June 30, up 174.6 billion compared with the previous quarter. That took the provision coverage ratio -- that is, provisions relative to the current level of bad debts -- to 193%, up 6 percentage points, according to regulatory data.

Matthew Chow, an analyst at S&P Global Ratings, said the lenders on their own initiative began to reduce exposure to Evergrande from May amid the tightening liquidity and credit challenges facing the company. Nevertheless, the ratings agency warned this week of possible contagion.

A People's Bank of China sensitivity test released earlier this month indicated that if the bad loan ratio for property-development loans were to rise by 15 percentage points, and that for mortgages by 10 points, the average capital adequacy ratio of the 4,015 banks assessed would drop from 14.4% to 12.3%, which S&P described as "not a small hit."

"An Evergrande failure in itself would not destabilize the banking system," it said. "However, if such an event were followed by the defaults of a few more highly leveraged major developers, it could evolve into a challenging situation."