But the company once hailed as the "LVMH of China" has faced pressure paying its bills in recent years. The latest deadline comes Monday as a 1 billion yuan ($152.73 million) domestic bond matures, and the signs do not look promising.

The company at the last minute canceled a bondholders' meeting, which was to have been held on Dec. 8, less than a week before the issue's maturity. The company on Dec. 7 cited a "need to adjust the agenda" for the conference, without elaboration.

A clue to the company's situation appeared in a premeeting statement by Ruyi and the Bank of Communications, the main bookrunner of the three-year bond. A proposal that was to be presented to the bondholders would have extended the issue's maturity and spread repayment over the next three years.

The statement acknowledged that Ruyi has been under "liquidity pressure" exacerbated by the coronavirus pandemic and that the proposal was intended to strike a balance between the company's "ability to prepare the cash and benefits for the bond investors."

Both Ruyi and the bank expressed hope that if investors agreed to the proposal, an official declaration of default could be avoided.

Ruyi also faces an interest payment of 75 million yuan due on Tuesday for another 1 billion yuan bond issued last year. The first interest payment on this bond was due March 15, but that date has been postponed twice -- to June 15 and then Dec. 15 -- with bondholders' consent.

Meanwhile JAB Holding, a Luxembourg-based investment company, confirmed to Nikkei Asia on Sunday that a deal struck in 2018 to sell Swiss shoemaker Bally to Ruyi has been abandoned. The original deal grabbed headlines as acquisitive Ruyi looked to add another a top class European brand to its portfolio. Shandong Ruyi Technology Group was once styled as the "LVMH of China" due to its acquisition of notable apparel brands such as Aquascutum, Sandro and Renown. (Photo by Makoto Okada)

"The talks with Shandong Ruyi did not end in a transaction. JAB remains the majority shareholder of Bally," said JAB media representative Zach Siegel. Ruyi had not responded to a request for clarification at the time of publication.

Shandong Ruyi has yet to disclose its half-year or third-quarter results. The latest data, for the first quarter ended in March, showed 4.58 billion yuan in cash on its consolidated balance sheet. Short-term borrowing and noncurrent liabilities due within a year totaled 14.36 billion yuan, more than triple the cash on hand.

Chenyi Lu, senior credit officer at Moody's, wrote that the evaluation indicates "a strong appetite for acquisitions and the high financial risk resulting from its debt-funded growth."

Ruyi once appeared to have a white knight. Jining City Urban Construction Investment, an arm of the municipality where Ruyi is based, committed last year to acquiring a 26% stake for 3.5 billion yuan. But Jining officially backed out in May and retains only a 0.01% stake.

But formerly Tokyo-listed Renown filed for bankruptcy protection this year and after no new sponsor appeared, the company was sent into liquidation by a Tokyo court last month.

Trinity, a Hong Kong-listed unit that runs fashion shops in greater China and Europe under brands such as Cerruti 1881, Gieves & Hawkes, Kent & Curwen and D'Urban, faces woes too.

Trinity said Thursday that Standard Chartered had petitioned a Hong Kong court to liquidate a subsidiary of the company. The Trinity unit had failed to pay 150 million Hong Kong dollars ($19.3 million) owed to the bank, according to the company's statement. 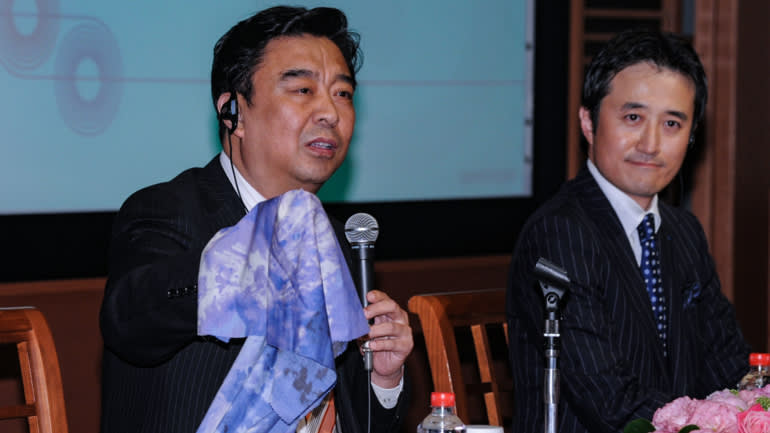 Qiu Yafu, chairman of Trinity and the Ruyi group, left, at a press conference with Renown in Tokyo in 2010. (Photo by Isamu Matsumoto)

Qiu Yafu, chairman of both Trinity and Shandong Ruyi, said in the filing that the Hong Kong-listed company was seeking legal advice while "approaching Standard Chartered Bank for settlement discussion."

Shandong Ruyi Woolen Garment Group, a Shenzhen-listed unit of the Ruyi conglomerate, updated the exchange in late November that a share issue pending for more than a year would be further delayed. The plan still awaits regulatory approval and the company now needs a renewed mandate from shareholders.

In its annual report last year, the unit's auditor deemed some dealings as questionable, leading it to issue a qualified opinion on the financial statements.

Qiu, during an interview with fashion magazine just-style in June, said his focus for 2020 has been to "continuously utilize fashion capital to optimize the asset allocation" of the whole group.

He cited the company's listing platforms in China, Japan and Europe for "actively promoting the capitalization of stock assets." The chairman expressed confidence that Ruyi could reduce debt through "listing and debt-to-equity swaps," though there has been no update since on this.