HONG KONG -- If bond market moves after the bailout plan arranged for state-owned China Huarong Asset Management are anything to go by, investors now believe government support will only be forthcoming for key financial institutions while other troubled borrowers like property developer China Evergrande Group will have to fend for themselves. 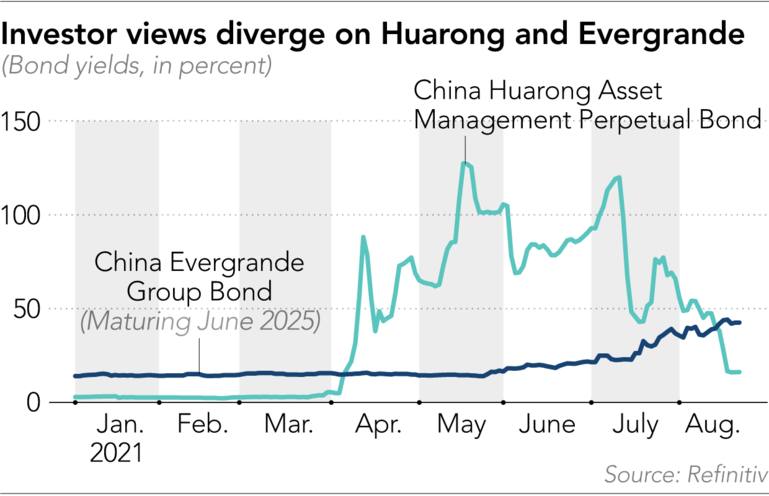 Over the past year, China has let state-run companies including Yongcheng Coal & Electricity Holding Group, chipmaker Tsinghua Unigroup and Huachen Automotive Group Holdings -- the parent of a local partner of BMW -- miss interest payments or redemptions on their bonds. These defaults shattered any assumptions that the Chinese state would always step in to save its industrial groups.

Corporate bond defaults in the world's second-largest economy totaled 62.59 billion yuan ($9.67 billion) in the first six months of 2021 -- the highest-ever tally for a half year -- with state-run companies accounting for nearly 60% of the missed payments, according to Fitch Ratings.

Since 2019, authorities have stepped in to bail out several financial institutions such as Baoshang Bank, Hengfeng Bank and Bank of Jinzhou, often asking other state-run lenders to inject capital.

For Huarong, it took the government five months to assemble the proposed capital injection from a group of companies led by CITIC Group. Some in the bond market saw this delay as a sign that Beijing was weighing its options and seeking a more market-oriented solution to the crisis.

Huarong, one of the four bad-debt managers set up in 1999 to drain China's banking system of mountains of sour loans, is majority owned by the nation's Finance Ministry. The company, which has $43 billion in bonds outstanding, has been in crisis since the end of March after failing to file its 2020 results. Huarong's shares have been suspended in Hong Kong since then.

When Huarong's bailout was revealed, the company said its 2020 loss totaled a record $15.8 billion. CITIC, China Insurance Investment and other state-owned investors are set to inject capital, and the company has no plans to restructure its debt, the asset manager said this month.

"The Huarong drama underlines the priorities of the Chinese government," said a hedge fund manager who picked up bonds in the distressed-debt investor over the past few months. "Given depositors were not involved, authorities took their time to come up with a revival plan. But the saga makes it clear: Companies in other sectors are on their own, and the state guarantee is passe."

A case in point is the liquidity crisis for Evergrande, the world's most indebted developer. The company, which owes $300 billion to bondholders, banks and suppliers, has seen financial institutions cut their exposure, while developers have been restricted from taking on additional debt by regulatory curbs on the sector. Media reports say China Evergrande is looking at selling its Hong Kong headquarters, among other assets, to pay down debt.     © Reuters

Top executives were summoned to Beijing last week and admonished to reduce the group's debt and refrain from spreading "untrue information." The company, which has yet to default on any bonds but has missed payments on notes to suppliers, is seeking to sell stakes in subsidiaries and has resorted to steep discounts on its properties to raise cash.

The developer's shares have dropped 68% year to date, falling this week to their lowest since September 2015.

Bond investors have turned equally cold. Evergrande's notes maturing June 2025 reached a record 44.2% yield on Aug. 19 and continue to trade near that level, while yields on Huarong's perpetual bonds have dropped to as low as 16.2% after nearing 100% in July, data compiled by Refinitiv shows.

Yields move inversely to price, with Evergrande's current yield indicating that investors regard a default or restructuring as almost inevitable.

Michelle Lam, greater China economist at Societe Generale in Hong Kong, noted that the Huarong bailout comes months after the crisis unfolded and that the "rescue" capital is being put forth by state-owned enterprises rather than the Finance Ministry or the central bank. This suggests the government remains "highly reluctant to offer top-level assistance," she said.

"The rescue plan has certainly helped alleviate investors' concerns for the time being, but bailouts are certainly going to be more selective as Beijing hopes to remove implicit guarantees for SOEs," she said.