Xi stays away from Evergrande but calls for inclusive growth at U.N. BEIJING/NEW YORK -- Chinese President Xi Jinping made no mention of embattled property developer China Evergrande Group or the threat of a systemic crisis that is shaking global stock markets as he addressed the United Nations General Assembly via video on Tuesday.

Instead, he called for the world to aim for "balanced, coordinated and inclusive growth" and that the fruits of development be shared among the people.

It echoed his recent emphasis on "common prosperity" and underscored the silence of the Communist Party- and state-run media on the government's Evergrande response.

The front page of Tuesday's People's Daily newspaper made no mention of the biggest story in Chinese business and finance.

Taken together, they speak volumes about the hard choices confronting the Chinese leader.

Having set out to redistribute wealth from the rich to the poor, Xi cannot easily resort to a bailout in real estate, a sector that the government has targeted for curbs on the kind of speculative transactions that only the well off or well connected can profit from. Nor can he risk triggering a financial crisis with a Lehman Brothers-like moment ahead of his bid for a third term as head of the Communist Party next year. 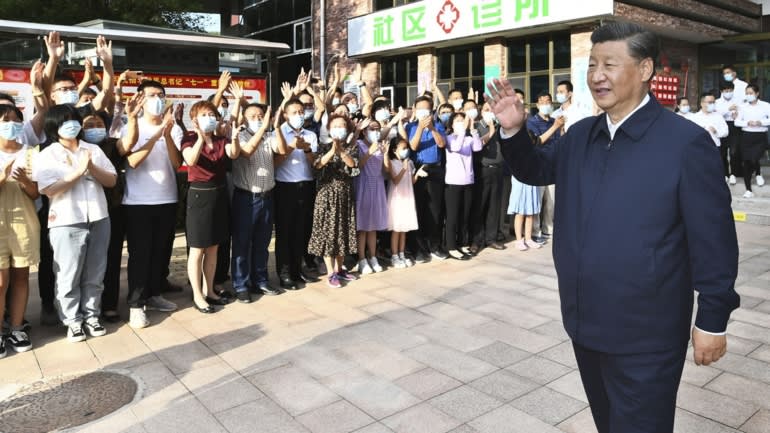 China's real estate market is a hotbed of dissatisfaction for urban residents struggling with a high cost of living. When authorities eased credit last year to soften the blow of the coronavirus pandemic, they fueled a run-up in property prices.

Real estate prices in 50 major cities were 13 times the average annual income in 2020, up from 10 times in 2015, according to the E-House Real Estate Research Institute.

Against this backdrop, any state bailout for heavily indebted Evergrande, a big player in residential property, risks looking like a backstop for rich property investors.

At the U.N. speech, Xi said the world should stick to a "people-centered approach" as the global economy rebounds from COVID-19.

"We should safeguard and improve people's livelihoods," he said, adding that the world needs to ensure that "development is for the people and by the people, and that its fruits are shared among the people."

Evergrande, the world's most indebted developer, has more than $300 billion in outstanding liabilities. It owes money to lenders, suppliers, builders and investors in its wealth management products.

Given the real estate industry's importance in China, an Evergrande-sized shock would be felt by the entire economy. The sector accounted for 7% of Chinese gross domestic product in the first half of this year, National Bureau of Statistics data shows.

Regulators, concerned that speculation would overheat the market, moved in the summer of 2020 to restrict new borrowing by developers. Banks were also ordered to cap mortgages to limit transactions by homebuyers.

These measures curtailed both developers' access to bank financing and their ability to recoup investments through property sales, driving Evergrande and others into a cash crunch. The ratio of bad loans for real estate at Industrial and Commercial Bank of China jumped to 4.29% at the end of June from 1.41% a year earlier.

Real estate lending accounts for about a fifth of total bank financing in China. If Evergrande cannot repay its debts, instability could rise in a chain reaction across China's financial system.

Yet the current direction of economic policy does not lend itself to a quick bailout of Evergrande. Even if support is provided through channels such as state-owned companies in Guangdong Province, where the developer is based, "it would be only after Evergrande finishes selling off non-core assets," a market source said.

Financial authorities have other options, such as using so-called window guidance to support cash flow at construction companies to which Evergrande owes money. But authorities would still be nowhere near clearing up the uncertainty hanging over markets.

Some China watchers connect Xi's silence on the matter to Evergrande's links to the Communist Youth League, which has been sidelined under the current president.

Evergrande's home turf of Guangdong Province is known as a Youth League stronghold. Xi, who has been consolidating power within the party, is widely speculated to stand apart from Premier Li Keqiang and Vice Premier Hu Chunhua, both Youth League faction members.

"It may be that Xi is choosing not to help shore up the position of subordinates with whom he doesn't see eye to eye," said an expert with knowledge of Communist Party affairs.