TOKYO / SHANGHAI -- Japan regained second place worldwide in market capitalization of its listed companies, as China's stocks continue to slide amid trade tensions with the U.S.

The combined market cap of Japanese stocks has held at $6.2 trillion in recent weeks, while Shanghai- and Shenzhen-listed shares have fallen to $5.2 trillion, the lowest in roughly two years, according to QUICK FactSet. Japan trails only the U.S.

China's market cap surpassed that of Japan in March 2015, even reaching 170% of Japan's, fueled by exuberant retail investors. But Beijing's surprise devaluation of the yuan in August of that year sent Chinese shares tumbling. After a roller-coaster ride that lasted several months, the Chinese market cap regained ground and typically had stayed above Japan's since early 2016.

Japan and China stood neck and neck in market capitalization toward the beginning of this year. Then in March, U.S. President Donald Trump's administration announced restrictions on steel and aluminum imports, sparking a sell-off of Chinese stocks. While Chinese shares have plunged, Japanese stocks have remained relatively steady thanks to robust corporate earnings and a limited impact from the China-U. S. trade battle.

"The fallout from the trade friction is beginning to show in such indicators as the business sentiment index" in China, said Toru Nishihama of Dai-ichi Life Research Institute. Exporters in China are suffering a decline in orders, while import-heavy businesses face higher costs from the weaker yuan. 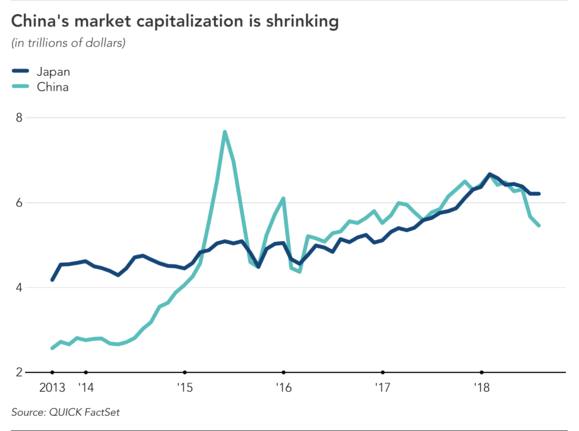 ZTE's stock was suspended for two months starting in April as the U.S. banned American companies from selling components to the Chinese telecom equipment maker. The company had violated U.S. sanctions against Iran. The stock went limit-down on many days after trade resumed in June, falling by more than 50% from levels prior to the hiatus.

Electric car and battery maker BYD has plunged roughly 40% since the end of February. The company plays a central role in President Xi Jinping's "Made in China 2025" initiative for the country's manufacturing sector to move up the value chain, and thus could be targeted by Washington.

On Wednesday, the U.S. Department of Commerce added 44 Chinese companies to the export control list, citing them as potential risks to American security and foreign policy. This move prompted sell-offs of shares such as China Shipbuilding Industry and North Navigation Control Technology.

In addition to the trade war, the Xi government's scrutiny of corporate and local government debt has put the brakes on infrastructure investment and fueled concern about an economic slowdown. Baoshan Iron & Steel and other cyclical stocks have been lackluster.

The Chinese Communist Party decided in late July to undertake aggressive spending to bolster the economy. However, many retail investors are hesitant to buy stocks, having yet to see concrete steps, according to a Chinese securities brokerage.

And should China's economy slow down as trade frictions intensify, Japanese businesses will feel the repercussions.

QUICK FactSet is a Nikkei joint service with an American company.