HONG KONG -- Chinese question-and-answer website Zhihu tumbled more than 20% in its Hong Kong trading debut on Friday, just a day after it was added to an official list of companies facing ejection from U.S. markets.

The drop marks the worst start among around 20 Chinese stocks that have taken up backup positions on the Hong Kong Stock Exchange since late 2019 in the face of potential removal from New York exchanges due to a dispute over audit inspections.

"There are a lot of mixed feelings inside me," Zhou Yuan, chairman and chief executive, said in a post on Zhihu's user platform on Friday. "We really are not as strong as we thought. ... We didn't expect the environment to change so drastically."

Zhihu's New York Stock Exchange-traded shares, which ticked up 0.6% on Thursday to $1.66, have plunged more than 80% since peaking last year at $13.85. Many Chinese technology shares have fallen similarly in the U.S. due to Beijing's regulatory interventions and pressure from slowing economic growth, renewed COVID lockdowns and Washington's own machinations.

On Thursday, the U.S. Securities and Exchange Commission placed 17 more New York-traded Chinese companies on a list that could see them ejected by 2024 if they do not allow U.S. regulators to review their audit records under a 2020 law. Beijing has restricted access under its secrecy laws.

The latest additions, bringing the list up to 40 companies, include Zhihu as well as Li Auto and Luckin Coffee. 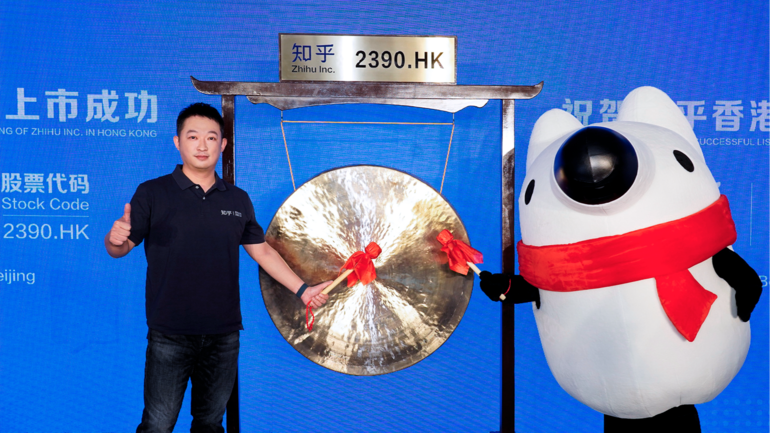 Zhihu founder Zhou Yuan said on Friday that he had "mixed feelings" about the company's Hong Kong debut. (Courtesy Zhihu)

Zhihu has also faced pressure from Chinese regulators. In December, the Cyberspace Administration of China ordered the company to make "immediate rectifications" to correct its publication of unspecified "illegal information."

Such listings require more time, expense and effort than the secondary listing route used by Alibaba Group Holding and most of the others have migrated so far, but opens the way for mainland Chinese investors to buy shares through HKEX's trading link with the Shanghai and Shenzhen markets. So far, companies with only a secondary listing on the HKEX are excluded from the link.

Zhihu, similar to U.S.-based Quora, has been suffering from losses for years.

Last year, the HKEX amended its rules for both dual primary and secondary listings to attract a broader range of companies already listed overseas. This is expected to boost listings this year after a decline in IPO fundraising in 2021.