The Lujiazui financial district in Shanghai. The number of stocks in which holdings through Stock Connect, which links Hong Kong and mainland China markets, exceeded 10% has more than doubled in the past year.   © Reuters
NARAYANAN SOMASUNDARAM, Nikkei Asian Review chief banking and financial correspondentAugust 20, 2020 11:57 JST | China
CopyCopied

HONG KONG -- The rally in Chinese equities is getting a turbo boost from foreign investors in a sign that fear of financial decoupling between the U.S. and China has not reached stock markets.

The CSI-300 Index of the largest listed shares on the Shanghai and Shenzhen stock exchanges has climbed 15.7% this year, only lagging the Nasdaq composite index among major global indexes. And the country's stock market capitalization is hovering at close to $10 trillion -- levels not seen since the 2015 crash that wiped out nearly half of its value.

While local mom-and-pop investors drove the buying frenzy back then, global capital is pouring in this time -- lured by the nation's economic recovery from the coronavirus pandemic. Foreign ownership of Chinese equities is at record levels, and the number of stocks with offshore ownership and the number of companies with such holdings have both jumped over the past year.

That comes despite fears that the ongoing tussle between Beijing and Washington could lead to a decoupling of the world's two largest economies.

While moves are afoot by U.S. politicians and regulators to kick out Chinese companies from American stock exchanges if they fail to comply with accounting regulations and President Donald Trump tweeting in mid-June that "a complete decoupling from China" is a policy option, the integration of China into the world's stock and bond markets continues, according to recent data. 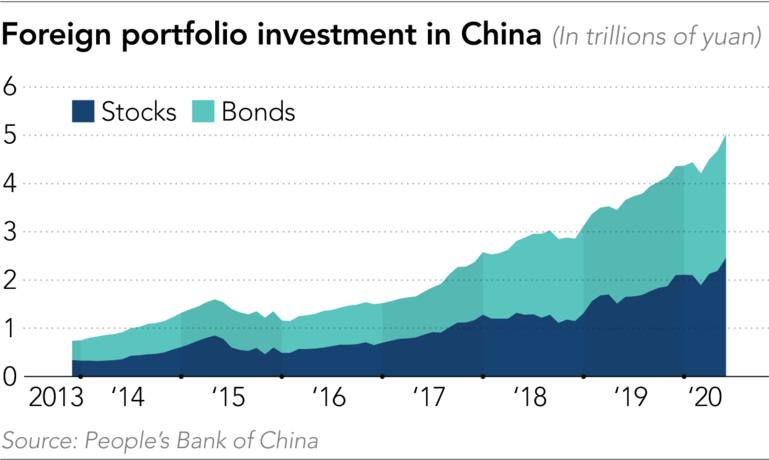 "A major portion of the rise [in Chinese stocks] was contributed by foreign funds," said Paul Sandhu, head of multi-asset quant solutions Asia-Pacific at BNP Paribas Asset Management in Hong Kong. "This will continue into 2021."

Sandhu said that a primary reason for increased allocation in mainland China stocks is because the country, where the coronavirus pandemic first emerged, has managed to control the virus and reopen its factories and services sector, well ahead of the rest of the world, limiting economic and corporate earnings contractions.

The stock rally has been powered by the likes of Bafang Electric, electrical appliances maker Midea Group, liquor producer Kweichow Moutai and Shanghai International Airport Co., which all have seen a surge in interest among global investors.

China's economy, which was the first in the world to face a blow from the virus, contracted 6.8% in the first quarter, but it also appears to be the first to rebound. The economy is on track to expand 2% this year, according to consensus estimates of economists. That would make it the only major global economy to grow.

The combination of buying into a market, which is among the least co-related to the U.S. stock indexes and thus giving it protection for investors from a global sell-off, and the likelihood of robust corporate earnings was too good to pass for investors, according to traders.

"Investors are convinced that Chinese corporate earnings growth is not going to fall sharply either from the coronavirus or the tensions with the U.S.," said Frank Benzimra, head of Asia equity strategy at Societe Generale in Hong Kong.

"Foreign investor holding of Chinese stocks has climbed just as its share market has notched gains, which would then indicate that foreign investors have continued to buy the equity market," he said. "If anything, the financial integration of China has deepened over this year."

Foreign investors held a record 2.46 trillion yuan ($354.5 billion) in Chinese stocks at the end of June, up 50% from a year earlier. Bond holdings also surged to an all-time high of 2.57 trillion yuan, or 27% higher during the same period, according to data from the People's Bank of China. 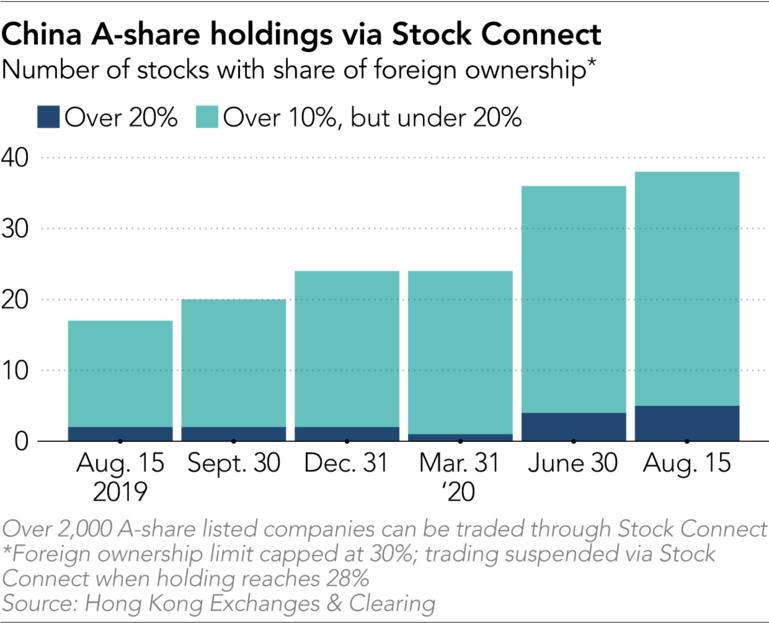 The number of stocks in which holdings through Stock Connect -- which links Hong Kong and mainland markets -- exceeded 10% has more than doubled in the past year to 38, according to data from Hong Kong Exchanges & Clearing, or HKEX. The number of stocks in which holdings are over 20% also has more than doubled to five in the same period and are inching close to the maximum permissible limit of 30%.

More than 2,000 mainland shares are offered to global investors in Hong Kong through the Stock Connect program that was launched in 2014. Once holdings through Stock Connect reach 28%, the stock cannot be bought through the program until holdings fall below 26%.

Stock Connect is considered a proxy for foreign interest in mainland shares, with data from HKEX showing almost 65% of the buying came from foreign investors.

Northbound volumes, or the trade in Chinese stocks through Hong Kong, doubled in July from the previous month, according to HKEX, indicating soaring interest in mainland securities.

"Purchase of Chinese equities and bonds by overseas investors is unlikely to slow down," said Tianlei Huang, research analyst at the Peterson Institute for International Economics in Washington.

"With China being the first major economy to return to growth since the outbreak of the pandemic, international investors are pouring even more funds into Chinese assets," Huang said. "There is still a huge potential for China's capital markets to accommodate greater international investment."

Foreign fund holdings equate to just over 3% of the Chinese A-share market and 2.4% of the nation's bond market, both of which are the world's second largest. With China's stock and bonds being included in global stock and fixed-income indexes, analysts are predicting foreign holdings will continue to increase for the foreseeable future.

"Global investors have a very small exposure to Chinese stocks," said Mark Dong, the Hong Kong-based co-founder of Minority Asset Management, which oversees $1.6 billion in Chinese stocks and in April started a Cayman Islands-domiciled offshore fund to cater to demand from global investors.

"Clearly the negatives from the U.S.-China tensions are well flagged and have been factored into valuations," he said. "Even after that, the desire to own mainland stocks is increasing given the rising influence of Chinese companies and diversification benefit."