HONG KONG -- Stock exchanges in mainland China and Hong Kong had their most successful year for initial public offerings in a decade in 2020, raising a combined $119 billion or roughly 45% of the global total.

The bourses faced some setbacks last year, like concerns over China's national security law in Hong Kong and the suspension of Ant Group's IPO, which was poised to break records. Still, they attracted numerous mainland Chinese companies seeking to raise funds closer to home amid Beijing's growing feud with Washington, which helped reinforce their position as top destinations for fundraising.

The Hong Kong Stock Exchange saw a 24% boost in IPO fundraising in 2020 to $50.3 billion, according to the accounting group KPMG. The Shanghai Stock Exchange enjoyed an 83% jump to $49.9 billion, and the Shenzhen Stock Exchange a 95% surge to $18.5 billion. Hong Kong and Shanghai ranked second and third worldwide in proceeds, behind only the Nasdaq in the U.S.

Overall, IPOs raised $263 billion worldwide in 2020, up 23% from the year before. The figure excludes special purpose acquisition companies, a type of shell corporation designed to help others circumvent the tradition IPO process that are becoming increasingly popular in the U.S.

The boost in Hong Kong largely came from U.S.-listed Chinese companies seeking a secondary listing amid the Trump administration's pushback against China over Hong Kong, trade and other issues. Chinese companies also face greater scrutiny in the U.S. market. 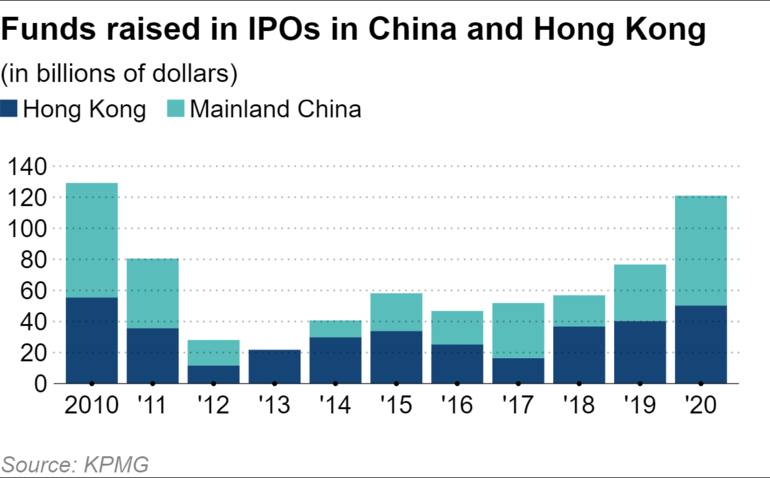 Nine companies, including e-retailer JD.com and game developer NetEase, conducted a secondary IPO in Hong Kong in 2020. Another 50 to 60 could potentially follow suit in Hong Kong or on the mainland, concerned that they could eventually be punted from U.S. bourses. Video-sharing platform Bilibili and car-selling website Autohome are believed to be considering a Hong Kong listing.

In light of this trend, PricewaterhouseCoopers projects that Hong Kong will regain its crown as the world's top IPO destination in 2021 with proceeds of almost $60 billion.

Hong Kong is expected to benefit from a speedy recovery in the mainland Chinese economy and an expanded Shanghai-Hong Kong Stock Connect, according to EY Asia-Pacific IPO Leader Ringo Choi. Ride-hailing company Didi Chuxing and JD Logistics are reportedly planning to debut in Hong Kong this year.

Shanghai's tech-oriented STAR Market accounted for about 60% of IPO proceeds at the bourse in 2020. Semiconductor Manufacturing International Corp. debuted on the board in 2020 in the world's largest IPO of the year.

Thirty-five Chinese companies raised $13.7 billion through new listings in the U.S. last year, a roughly 270% increase from 2019, according to Deloitte. Fintech company Lufax Holding, electric-vehicle maker Xpeng and retailer Miniso were among those who opted for a U.S. listing. But it is unclear how many will follow in their footsteps under the incoming administration of U.S. President-elect Joe Biden.

Meanwhile, uncertainties over Ant Group's IPO hang heavy over Chinese markets. Ant, a unit of Alibaba Group Holding, had its listing abruptly scuttled in November. Because tech companies have driven IPOs over the past few years, a tighter crackdown by authorities in the business world will have an unavoidable impact.

"The outlook for Ant's listing is getting less and less certain," said a market source.