HONG KONG -- Chinese companies are rushing forward with plans to raise more than $5 billion in initial public offerings in New York ahead of new U.S. rules that would effectively shut off this funding channel.

KE Holdings, an online property platform backed by Tencent Holdings and SoftBank Group, and Xpeng, an electric carmaker with ties to Alibaba Group Holding, each filed new public prospectuses on Friday, a day after a White House task force recommended that all future Chinese IPO candidates be required to allow U.S. regulators to review their audit records as a condition of listing.

KE Holdings, also known as Beike Zhaofang, could raise as much as $2.01 billion if its shares price at the top of the range indicated in the new prospectus. This would make it the largest U.S. IPO by a Chinese company in two years, according to data provider Dealogic.

Xpeng, which indicated a placeholder deal size of at least $100 million in its prospectus, is expected to seek around $500 million, according to U.S. investment bank Renaissance Capital.

Other Chinese companies in advanced preparations for U.S. IPOs include Lufax, an online wealth management platform backed by Ping An Insurance Group, and ChinData, a data center operator with funding from Bain Capital. Lufax could raise at least $2 billion while ChinData is targeting around $500 million, according to people familiar their plans.

Both Xpeng and KE Holdings had originally filed their IPO plans confidentially. Other Chinese companies are likely to have made confidential listing applications which could become public in the coming days.

Li Auto, a rival of Xpeng backed by ByteDance and internet company Meituan Dianping, raised $1.1 billion on July 30 in the biggest Chinese IPO so far this year in New York. It priced its shares at $11.50 each, well above the initial guidance of $8-$10, due to strong investor demand.

The U.S. Securities and Exchange Commission, whose chairman is part of the Presidential Working Group on Financial Markets, is expected to soon publish new rules putting into force the tightened requirements for new Chinese IPOs.

Chinese companies already listed in the U.S. would have until Jan. 1, 2022 to come into compliance with the audit records disclosure requirement, which conflicts with Chinese secrecy laws. Failure to comply would lead to delisting.

Xpeng, which recently closed a $900 million funding round that included Alibaba, the Qatar Investment Authority and Abu Dhabi's Mubadala, said in its prospectus that the effort to tighten listing rules could "adversely affect" its share price or "result in prohibitions" on trading of the shares on the New York Stock Exchange.

KE Holdings similarly warned prospective investors that "we could face possible delisting from the NYSE (or) deregistration from the SEC." Lufax declined to comment on its IPO plans while ChinData could not be immediately reached.

"The companies must have evaluated the risk of U.S. actions when they started work on the listings and decided the U.S. market was their best option," said Shujin Chen, an analyst covering the finance sector for brokerage Jefferies in Hong Kong.

U.S. President Donald Trump directed the White House task force to review the risks posed to American investors by Chinese stocks on June 4 as he sought to raise pressure on Beijing amid the coronavirus pandemic and its moves to tighten controls in Hong Kong.

His order also followed a series of accounting scandals at Chinese companies, most significantly, one this year involving Luckin Coffee, which lost most of its market value and its place on the Nasdaq Stock Market after disclosing that $300 million in recorded sales were fictitious.

With the presidential review underway, Chinese companies raised around $2 billion in U.S. IPOs between mid-June and the beginning of August, matching their haul over the first 5-1/2 months of the year and raising the accumulated sum past the full-year total for 2019, according to Dealogic data.

"The rush is based on hopes a compromise can be worked out between U.S. and Chinese authorities," said a banker who has been involved in several of the New York listings this year. "There is strong appetite for Chinese offerings in the U.S. as investors want access to companies that are well entrenched in the mainland. Hopefully, something will give."

The White House working group left the door open for a compromise. It called for co-auditing of companies that are unable to comply with U.S. rules by accountants who Washington regulators determine have sufficient access. 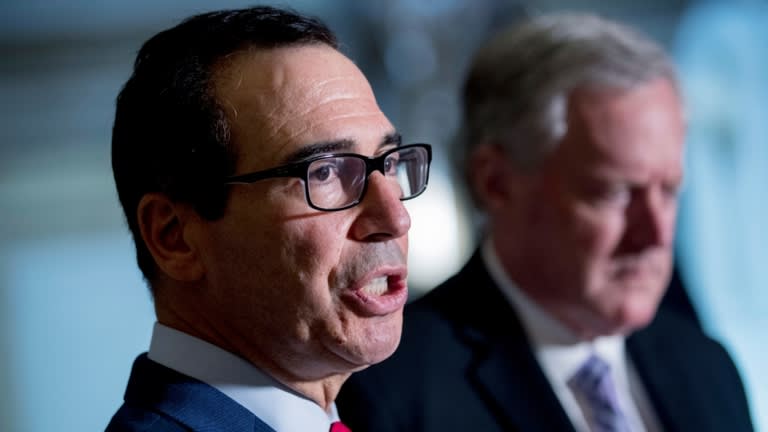 However, Jefferies' Chen said, "For those (companies) that have just begun work (toward an IPO), the latest move by the U.S. is a dampener and would force them to halt work and look at alternatives."

Amid rising calls over the past year from members of Congress to push Chinese companies off U.S. markets, a number have established secondary listings on the Stock Exchange of Hong Kong as a backup or have received shareholder privatization offers.

Those adding a Hong Kong listing over the past year -- and raising billions of dollars in the process -- include Alibaba, rival JD.com and gaming company NetEase.

About 42 Chinese companies trading on U.S. stock exchanges would qualify for a secondary listing in Hong Kong. Yum China, which runs the country's Pizza Hut and KFC restaurants, TAL Education, e-commerce company Baozun, delivery company ZTO Express and data center operator GDS are among those preparing for secondary offerings, according to people familiar with their plans.

Some 354 companies of Chinese origin have listed in the U.S. since 1993, raising a total of $88.5 billion, according to Citigroup. Over the years, 107 of them have been delisted and the current market value of those remaining stands at $1.5 trillion.

The Presidential Working Group's recommendation is a "watershed, the most serious step yet in some measure of decoupling between the two financial sectors," analysts led by Michael Hirson at consultancy Eurasia Group said in a client note last week.

"Chinese companies currently listed in the U.S. will continue a stampede to issue secondary shares in Hong Kong and domestic markets, and these markets will also be the main destinations for new listings by Chinese companies," they said.