Imported iron ore sits at a Chinese port. A Goldman Sachs report predicted "the sunset of the Iron Age starts in 2014."   © Reuters

TOKYO -- Hebei Iron & Steel Group is China's largest steelmaker. It is also an apt symbol of the nation's rise to dominance and recent rough patch as a resource consumer -- a hiccup that is affecting markets far and wide.

At an event in late December, a top finance official at Hebei Iron admonished fellow executives to do a better job with cash management. The company boasts annual production of around 42 million tons. But it is saddled with hefty debt, and massive capital spending -- premised on a rise in steel prices -- has further eroded the company's position. Hebei Iron now faces the triple whammy of a glut of facilities, debt and personnel.

Hebei Iron was established in 2008 through an industry overhaul. In the wake of the global financial crisis that began that same year, the Chinese government rolled out 4 trillion yuan ($586 billion, at the time) in economic stimulus measures, igniting investment in domestic infrastructure. The steelmaking industry flourished as construction of bridges, highways and high-speed railways accelerated. In a rush to procure iron ore and coal, steel companies snapped up resources overseas at asking price. 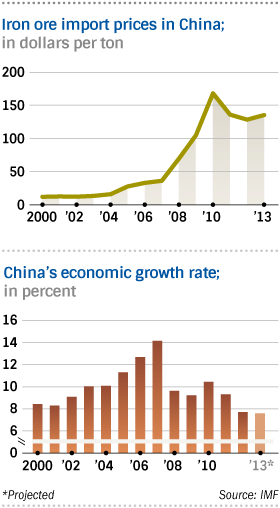 New entrants quickly emerged on the scene. Then China's economic growth began to slow, and the industry's overcapacity soon became apparent. Companies operated in the red while scrambling to pay back loans, fueling downward pressure on steel prices.

Global iron ore prices have mirrored the Chinese steel industry's ups and downs. Spot prices that were around $20 a ton through 2003 tracked higher and briefly spiked to $190 in 2011. Australia and other producer nations could not develop new mines fast enough to keep up with China's voracious appetite.

A Goldman Sachs report, presented to clients Jan. 21, caused a stir by predicting that "the sunset of the Iron Age starts in 2014."

The report talks of sliding ore prices and a potential supply glut. The cause: China, the world's largest steel producer, throttling back on crude steel output just as Rio Tinto and other major resource companies open new mines developed with Chinese demand in mind.

The balance of maritime trade in iron ore is expected to show a supply surplus of 12%, or 159 million tons, in 2015. "Iron ore prices could even fall below $100 in 2015 and beyond," said Jiro Iokibe, senior analyst at Daiwa Securities, who also predicts a downturn.

Copper, aluminum, lead and other nonferrous metals face a similar fate, considering China accounts for at least 40% of global consumption.

International aluminum prices -- vulnerable to slowing demand in the construction sector -- have already hit a roughly four-and-a-half-year low, prompting major smelters worldwide to slash output. That is exactly what aluminum suppliers have to do if they hope to help market prices recover, Oleg Deripaska, CEO of major Russian aluminum producer United Co. Rusal, stressed in January.

Some believe it is only a matter of time until things turn around. Murilo Ferreira, the chief executive of global miner Vale, on Jan. 21 characterized the Chinese economy as strong and predicted the drop in iron ore prices would be temporary. But that could prove to be wishful thinking.

The Communist Party of China leadership is pursuing structural reforms designed to make consumer spending, rather than stimulus, the main growth driver. Such a transformation would slow steel shipments to the machinery sector, which accounts for 20-30% of demand.

In early January, well-known investor George Soros sounded a warning about China's economic outlook, saying "the growth model responsible for its rapid rise has run out of steam." Soros went on to note that China's current economic stimulus, which has led to sharply ballooning debt, cannot be sustained for "much longer than a couple of years."