Asia awash in Chinese steel as Trump tariffs wall off US

TOKYO/SHANGHAI -- The steel tariff imposed by Washington last year has split the U.S. market from the rest of the world, leaving Asia facing a glut of Chinese metal.

As China lifted infrastructure spending to shore up its economy, the country's steel output grew 9.9% to 492.16 million tons, outpacing the global average.

Meanwhile, as Asia struggles to absorb China's steel, the U.S. is facing its own problems. Though President Donald Trump's 25% tariffs on imported steel initially proved to be a boon for American producers, U.S. steel output has slowed again as domestic demand, especially for cars, weakens amid the trade war.

The surge in China's steel production marks a reversal from Beijing's efforts to shed excess capacity in its steel industry.

Now, new investment in steelworks has started to flow. Baoshan Iron & Steel, a subsidiary of top Chinese player China Baowu Steel Group, launched a third blast furnace last year at its cutting-edge plant in Guangdong Province, even as it scrapped aging facilities. The new furnace can churn out more than 10 million tons a year, according to Baoshan.

But the trade war has dented demand from Chinese automakers and other industrial buyers, spurring steelmakers to seek overseas buyers for products for these industries. Chinese exports of steel sheet grew 8% on the year in the five months through May. The price of hot-rolled coil, a type of steel sheet used for autos and other products, in East Asian export markets has fallen to $550 per ton from $640 last October.

The difficult market conditions factored into the decision by Krakatau Steel, Indonesia's largest steelmaker, to slash its core workforce by 30%.

Japan's imports of Chinese carbon steel surged 73% on the year for the five months through May. The country has been buying more steel from abroad after a string of production problems at domestic facilities last year. Workers load steel pipes for export at a port in Lianyungang, in China's Jiangsu Province.   © Reuters

Meanwhile, the 25% U.S. tariff imposed in March 2018 has pushed Russian and Turkish steel into Europe, to the detriment of local producers. Long-suffering British Steel -- formed in 2016 from assets acquired from India's Tata Steel -- lurched into insolvency in May. Global No. 1 ArcelorMittal has announced plans to scale back production.

The Trump administration cited national security reasons for the steel tariff, one of his first moves to protect American industry. The duties drove a 12% drop in steel imports in 2018 and prompted the first wave of domestic capacity expansions in some time.

Market leader U.S. Steel restarted two blast furnaces in the state of Illinois that had been shut down since 2015. This year's data also suggests solid performance, with production up 5% on the year in the first half.

But cuts recently announced by steelmakers show a reversal. U.S. Steel said last month it would idle two domestic blast furnaces, reducing monthly output by an estimated 200,000 to 225,000 tons -- about 3% of the country's total. AK Steel, the fourth-largest American steelmaker, said in January it would close a Kentucky plant by year-end.

Sluggish American demand appears to be the main culprit. New-auto sales dipped 2% on the year in the January-June period in a sign of weakness in the auto industry, American steelmakers' biggest customer. The U.S. price of hot-rolled coil has slumped to around $630 per ton after reaching $1,000 in July 2018. 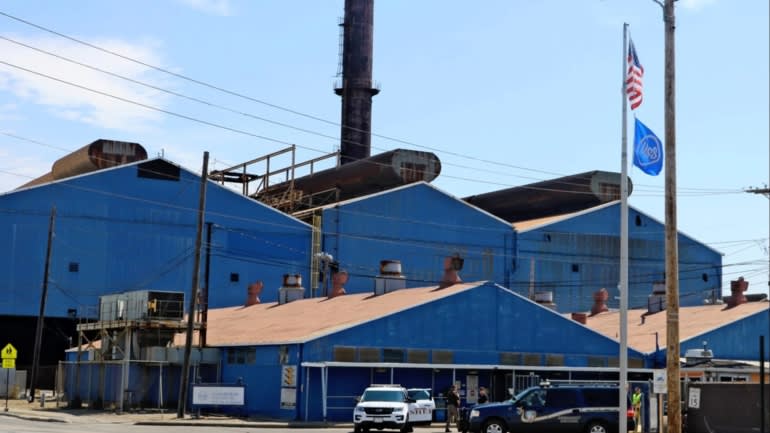 U.S. Steel restarted two blast furnaces at this Illinois plant in 2018, but announced plans this year to idle two furnaces elsewhere in the country.

Global crude steel production came to 1.8 billion tons in 2018. China, which produced an estimated 1.3 billion tons a year at its peak, slashed capacity by 120 million tons between 2016 and 2017 and by another 30 million tons last year.

Yet global capacity still stood at 2.23 billion tons in 2018, according to the Organization for Economic Cooperation and Development. The organization sees the total growing as much as 5% between 2019 and 2021, driven mainly by Asian producers including China and India.

Other U.S. tariffs are having a similar impact on commodities such as aluminum, which was hit with a 10% duty last year. In Japan, the aluminum premium -- which reflects transport costs and regional supply-demand balances -- has fallen to $108 per ton, down 20% from a year earlier, as metal flows into Asia instead of the U.S.

International copper prices have also declined on speculation that higher American tariffs on Chinese appliances imposed in May will drive down demand among manufacturers in China, the world's top copper-consuming country. Benchmark three-month futures on the London Metal Exchange have fallen 5% in the past year to around $5,960 per ton.