Asia's appetite for coal grows, with China the key decider

India's consumption forecast to climb even as renewables flourish

TOKYO -- Although renewable power generation is expected to rise significantly in Asia, India's vast electricity needs will still underpin global demand for coal until 2024, according to a recent report released by the International Energy Agency.

The IEA said, however, that China will be the biggest decider of coal's future after 2024, as it accounts for half of global consumption.

In India, the report said that wind power generation capacity is expected to double between 2018 and 2024, while solar power generation is seen to surge fourfold over the same period. But India's coal consumption is expected to rise by 4.6% per year through 2024, the biggest expansion it sees in any country. Over the same period, Southeast Asia's coal demand is also seen to increase by 5% annually, led by Indonesia and Vietnam.

Such rises will offset any drop in coal consumption in the European Union. "Although [coal consumption] will probably decline in 2019, we expect it to remain broadly steady thereafter through 2024," said the IEA.

The burning of coal for fuel emits more greenhouse gases than from any other energy source. As such, it is a key contributor to climate change, and several countries in the EU have adopted plans to phase out coal power generation.

Even China's coal consumption is expected to decline over the next few years as a result of air pollution concerns and structural economic changes. The IEA report said: "Overall, coal demand in China plateaus by 2022 and then starts to decline slowly." 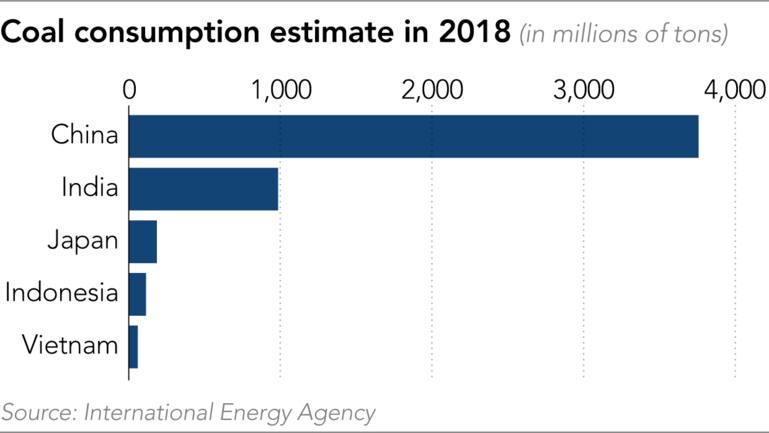 Despite some moves toward cleaner energy, Japan has come under criticism for its lack of commitment to reducing coal-fired power plants, as brought to the fore at the United Nations Climate Change Conference in December. "I cannot share new developments on our core policy today," said Japanese Environment Minister Shinjiro Koizumi at the conference, nicknamed COP25.

Japan's three leading banks were the top lenders to companies involved in coal-fired power projects, according to a report by nonprofit and nongovernmental organizations including BankTrack.

Mizuho Financial Group, Mitsubishi UFJ Financial Group and Sumitomo Mitsui Financial Group are thought to have provided $39.3 billion in loans to the sector between 2017 and the third quarter of 2019. The report also showed that Chinese financial institutions -- Industrial and Commercial Bank of China, Ping An Insurance Group and CITIC -- were the top three underwriters for coal developers. An official at one of the named companies said the figures were misleading because they included loans to companies that undertake both coal-fired power plants and other projects, including renewable energy, although she declined to speak on the record.

Given the global shift toward cleaner energy, many Japanese banks and companies have announced guidelines to limit investments in new coal-fired plants.

Trading company Sumitomo Corp. had said it wanted to decrease coal generation capacity to 30% of its total from 50%. But it still faced criticism for commencing construction on the 1,320-megawatt Van Phong 1 coal-fired power plant in Vietnam, which was finalized in 2009. The project is also funded by Mizuho, MUFG and SMFG.

"The project is needed to fill the electricity demand gap" in Vietnam, said a Sumitomo spokesperson. The company also has a project under construction in Indonesia.

Despite such legacy projects, there are new renewable projects on smaller scales that are more competitive, a trend that is leading to "a slow death" for coal, said a lawyer specializing in energy projects. According to the IEA, more solar power plants were approved in Southeast Asia in the first half of 2019 than new coal-fired projects.

According to Keisuke Sadamori, an IEA director, China's energy needs will also depend on its future policies. The Chinese government is expected to release its 14th five-year plan this year to set targets for 2021 to 2025.