SYDNEY -- The drought affecting southeastern Australia has doubled hay prices, severely affecting ranchers and raising the prospect of higher international prices for beef from Down Under.

Markets like Japan, the U.S., China, South Korea and Indonesia, the world's top importers of Australian beef, would likely be most affected by a price increase.

"It's the worst drought in eastern Australia since 1965," said Prime Minister Malcolm Turnbull in a radio interview on Aug. 6. New South Wales and neighboring states have been in the grip of a severe dry spell since the start of the year. Rainfall across the continent in July was the lowest since 2002, the Bureau of Meteorology said. This has tightened hay supplies, and fodder is now trading for as much as 400 Australian dollars ($296) a ton -- more than double the AU$150 of just six months earlier.

Cattle and sheep in Australia generally consume green grass as their main diet. Hay from wheat stems and other plant material is used as a nutritional supplement -- except during a drought, when it serves as an alternative source of food. 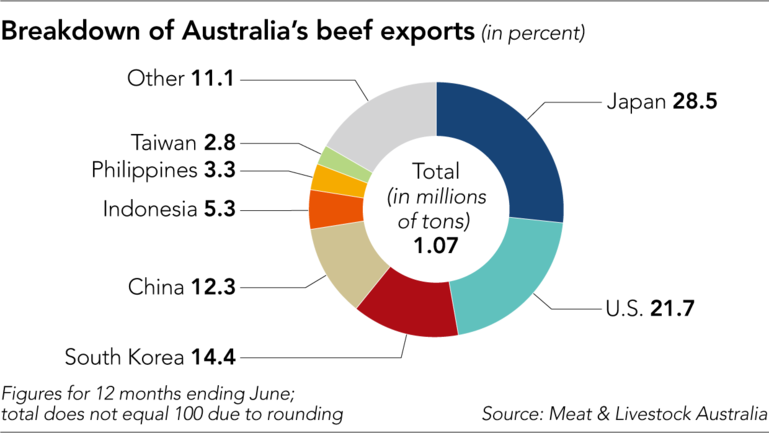 "Cattle prices have come down a little bit" because farmers put "a lot more cattle on the market as they could not feed them due to the drought," said Angus Gidley-Baird, a senior analyst at Dutch lender Rabobank. "The price has dropped steadily from the beginning of the year," he said. Gidley-Baird also said that the early shipments will likely reduce supplies in the long run, pushing domestic prices up.

Although squeezed by the ongoing dry spell, Australian producers are so far unlikely to raise export prices on beef. Australian ranchers "compete with the U.S." and thus are "selling for the same price as that set by the international market," Gidley-Baird said.

American producers have also been hit by higher Chinese tariffs on their beef amid the escalating trade war between Beijing and Washington, affecting global prices.

Turnbull said he himself has been in the cattle and sheep business for over 36 years and described this year's dry spell as being "longer and more widespread than any drought." The federal government has pledged over AU$500 million in support for ranchers, but if the drought persists much longer, the price of Australian beef in the international market could rise significantly.