The index price for palm oil on the Bursa Malaysia Derivatives Exchange was 3,064 ringgit a ton as of mid-October, up 38% from a year earlier.   © Reuters
RURIKA IMAHASHI and ERWIDA MAULIA, Nikkei staff writersOctober 25, 2020 17:09 JST | Southeast Asia
CopyCopied

TOKYO/JAKARTA -- Palm oil prices are rising, due to recovering demand from China and India and labor shortages in producing countries as a result of the coronavirus pandemic.

The index price on the Bursa Malaysia Derivatives Exchange was at 3,064 ringgit ($737) a ton as of mid-October, up 38% from a year ago. In August it hit its highest level since January, reaching 3,100 ringgit a ton.

Palm oil is one of the most commonly used oils in the world, with its main uses in food but also in cosmetics and biofuels. Indonesia and Malaysia account for 90% of global supply.

The surge in the price reflects the rapidly recovering demand from India and China, the world's two biggest consumers of palm oil, after they went through nationwide lockdowns and temporary halts on economic activities due to the pandemic.

According to the Malaysian Palm Oil Board, Malaysia's exports of palm oil to China reached 249,897 tons in September, up 69% from March. Exports to India have also increased significantly in the past few months. In September, 374,553 tons of palm oil were exported to the country, 42 times more than in March. 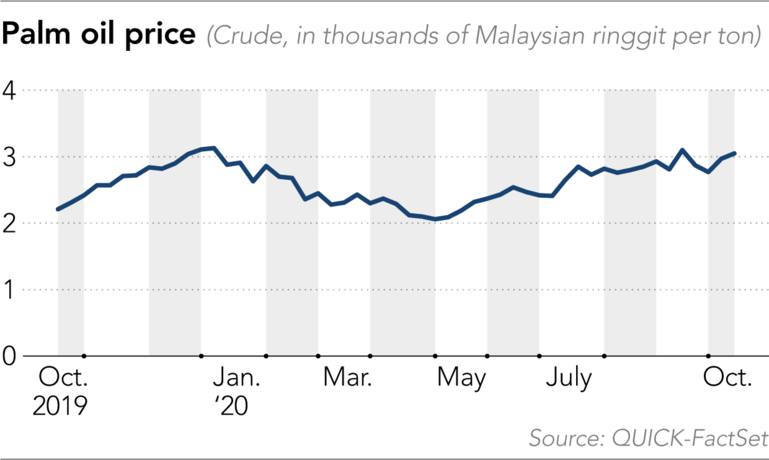 During the lockdowns, importers used up their inventories. But now, as economic activities have gradually resumed, importers are rushing to procure palm oil to meet the recovering demand. "Demand in China especially has recovered more quickly than expected," said a trader at a Japanese trading house.

For Malaysia, positive political relations with India -- its biggest palm oil buyer -- have also contributed to growing exports. Last October, an influential trade group in India asked its members to refrain from importing Malaysian palm oil, after New Delhi and Kuala Lumpur experienced friction over Kashmir. Malaysia had taken a stance of siding with Pakistan, which also claims the territory, while India had called for the extradition from Malaysia of an Islamic preacher whom it claimed was inciting hate speech against the country. However, the political unease was allayed after Malaysia's then Prime Minister Mahathir Mohamad stepped down in February.

Indonesia, the world's largest producer of palm oil, is also experiencing an increase in exports. The level in July increased 13% from June, according to the Indonesian Palm Oil Association. From January to July, "exports to India increased to 3.249 million tons, which was 22% higher from exports [in the same period] last year," it said.

Indonesia generated 23.5 million tons of palm oil in the first six months of this year, a 9% decline from the same period last year. Joko Supriyono, chairman of the Indonesian Palm Oil Association, said the production decline was an aftereffect of oil price falls in 2018 and an extended dry season last year.

The pandemic has had an impact on Indonesia's palm oil exports, which dropped 11% in the first half to 15.5 million tons. But the price increases have conversely caused exports to rise 6% in terms of value to $10.1 billion.

Supriyono said oleochemicals -- chemicals derived from animal and plant fats such as palm oil and which are widely used in home and personal care products -- outperformed other palm oil products, with a 24% increase in export volume to 1.8 million tons in the first half. "This is probably related to the pandemic -- now there is a demand everywhere for disinfectants, hand sanitizers and other cleaning [products]," he told a press conference in August.

Meanwhile, industry players think the outlook is "good" for exports of edible palm oil for the rest of the year.

"European and other subtropical countries are having difficulties because of this COVID problem, [and] surely their production will relatively go down," said Sahat Sinaga, executive director of the Indonesian Vegetable Oil Industry Association, at the same August press briefing. "So it's no surprise we've seen palm oil prices continue to rise."

Despite the recuperating demand, another factor affecting prices is the trouble suppliers are having in securing enough labor to proceed with the palm harvest. The workforce often consists of foreign laborers from neighboring Asian countries, such as the Philippines, but restrictions on entry to palm oil-producing countries are causing hampering their movement.

According to the MPOB, palm oil production in Malaysia through August this year slipped 5% from the same period last year.

With demand brisk and supply limited, many industry observers expect the high prices to continue for some time. "We are expecting the prices to hover around this high level at least within the year," said a representative from a Japanese food ingredient producer.

However, the industry has to pay attention to some factors that could drive palm oil prices down in the long run, analysts warn.

One is how the European Union will deal with palm oil. In 2018, the EU agreed to phase out the use of the commodity in transport fuels from 2030, claiming that palm plantations are causing deforestation in producing countries.

Since then, tensions have been escalating between the EU and Indonesia and Malaysia. Last year, Indonesia filed a lawsuit at the World Trade Organization against the EU. Malaysia is reportedly planning to follow suit.

But it appears it will take time before that conflict is resolved. Kalyana Sundram, CEO of the Malaysian Palm Oil Council, told reporters last year that the suit against the EU could take two years or more to reach a conclusion.

"The anti-palm movement of the EU would put downward pressure on palm oil prices," said the representative of the Japanese trading house, adding that industry observers should carefully monitor the entire supply and demand situation in the long run.

In addition, Kazuhiko Saito, chief analyst at research company Fujitomi in Tokyo, said he was carefully monitoring the recent "clean plate" campaign against food waste led by Chinese President Xi Jinping. In China, it is traditional to order extra dishes and leave food at the end of a meal as a way of demonstrating generosity.

"As leftovers are no longer considered a virtue, oil consumption for food in China may slump in the future," said Saito. "We need to pay attention to the supply and demand balance to project the long-term palm oil market situation."