China on pace to become top natural gas importer in 2018

TOKYO -- China is expected to become the world's biggest importer of natural gas for the first time in 2018, overtaking longtime leaders Japan and South Korea.

The increase in China's imports impacts the spot price for liquefied natural gas in Asia, which doubled between July and December of last year to $11.20 per million British thermal units from $5.45.

The sharp rise in demand from Asia's biggest economy may also influence international trade in natural gas, which is mostly based on long-term contracts, "potentially resulting in a global scramble for natural resources," one analyst says.

The International Energy Agency had forecast in June that China would become the largest importer of natural gas in 2019, but the most recent data appears to accelerate that timetable. Asian countries are diversifying their supply sources, a sign of the region's growing importance as a consumer of natural gas.

Concern for the environment is a major reason for China's increasing imports of gas. Severe air pollution has driven the country to shift rapidly from coal to gas, which burns more cleanly and emits around half as much carbon dioxide as coal.

China imports gas in two ways, as LNG and through pipelines. In terms of LNG, which can be transported by tanker, China imported 38.13 million tons last year, up 46% from 2016. In 2011, its LNG imports totaled just 12 million tons, one-third those of South Korea. China's LNG imports have tripled in just six years. 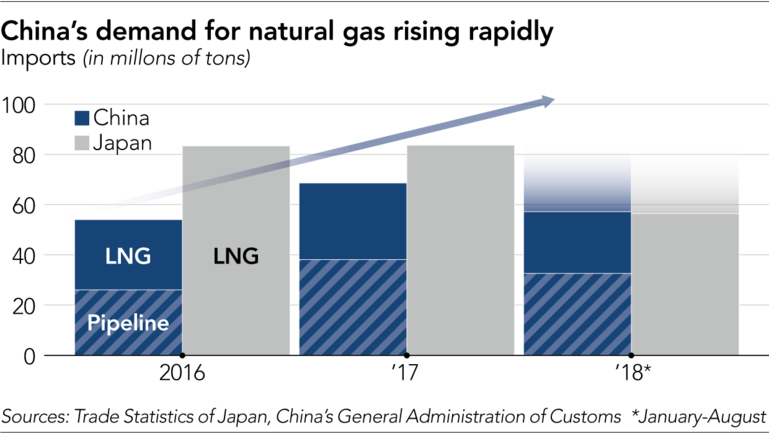 "It is quite unlikely that natural gas trade will be immediately impacted by the sharp rise in demand, as [purchases] are usually long-term contracts, and there is a limit to storage capacity in importing countries," said Naohiro Niimura, a partner at Market Risk Advisory, a commodities consultancy.

However, he is cautious about the long-term impact of Chinese demand and global trends.

"Demand for natural gas could be fueled in the long term if the exit from coal accelerates at COP24, scheduled in December 2018, potentially resulting in a global scramble for natural resources," Niimura said. COP24 refers to the next meeting of the parties to the Paris Agreement on Climate Change.

The outlook for China's natural gas imports has become cloudy since the country imposed a 10% tariff on LNG from the U.S. on Sept. 24, amid an escalating trade fight between Beijing and Washington.

China had hoped to import a lot of LNG from the U.S. in response to sharply rising domestic demand, and as a way to cut its trade surplus with the country. Bloomberg New Energy Finance expects China's LNG imports to grow to 82 million tons by 2030, saying, "If all of that was purchased from the U.S., it could contribute $27.7 billion to the U.S. trade balance." But as the trade war intensified, China reversed course.

That does not appear to have slowed Beijing's gas imports, and China is looking for new suppliers. In mid-September, PetroChina agreed to a 22-year deal for LNG with Qatargas, the Qatari state-owned company. The Power of Siberia gas pipeline, the world's longest, stretches 3,000 km and connects eastern Siberia and China. It is expected to begin operating next year, bringing gas from the Arctic Circle to China.

Michiaki Hirose, chairman of the Japan Gas Association and of utility Tokyo Gas, also predicts that "China will appeal to various countries in order to increase imports from sources other than the U.S."

In 2017, the U.S. supplied just 2.28% of China's natural gas imports. Even if the U.S. share drops to zero, Beijing is unlikely to suffer much. China should be able to find alternative suppliers, and it is "unlikely that its natural gas will run short in the medium term," said Market Risk Advisory's Niimura. Even after the 10% tariff, the Asian LNG spot price remains around $11 per million Btu. 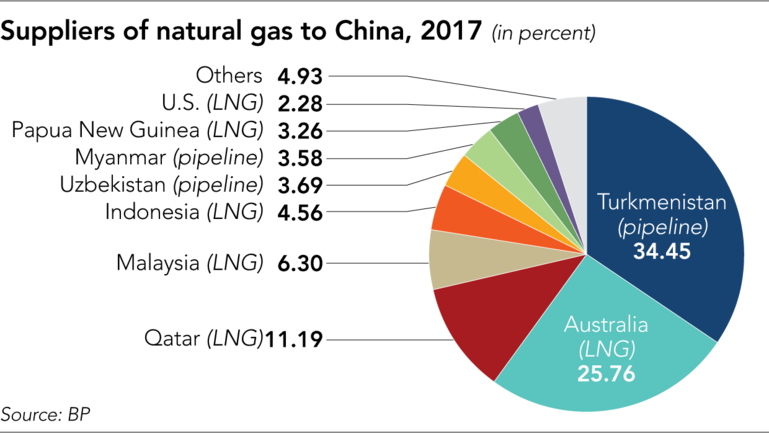 Ensuring supplies is also important to Japan, which is working to reduce its energy consumption. Japan's imports of LNG were spurred by the 2011 meltdowns at the Fukushima nuclear power plant. Though some forecasts indicate a surplus of 35 million tons of LNG annually if Japan's nuclear plants come back online, as the government hopes, public opposition to nuclear power means there is no clear timetable for restarting them.

Japanese companies are developing supply sources in North America. On May 21, the tanker LNG Sakura arrived at Tokyo Gas's Negishi LNG terminal in Yokohama. The ship carried 70,000 tons of LNG from Maryland, the first long-term delivery of such gas from U.S. shale producers. This joint project between Tokyo Gas and Sumitomo Corp. is committed to purchasing 2.3 million tons annually from the U.S. 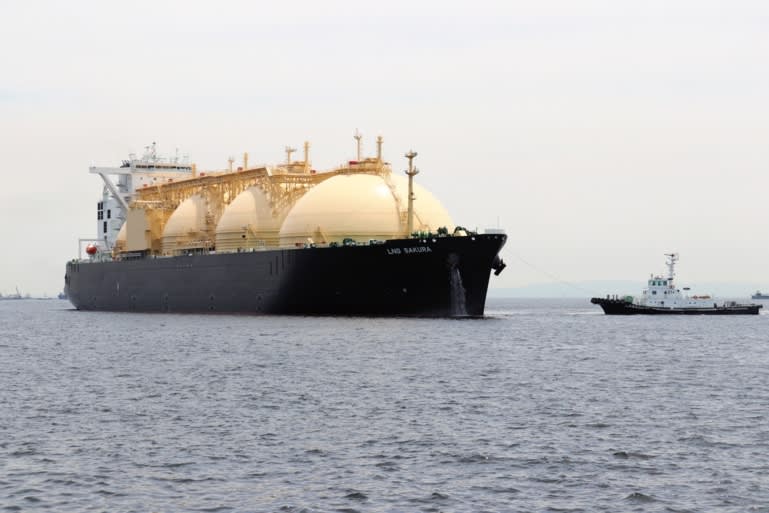 LNG Sakura carried 70,000 ton of LNG from Maryland, as the Japan's first long-term delivery of LNG from U.S. shale producers.

LNG contracts, including those with Middle Eastern producers, are traditionally based on long-term delivery and linked to oil prices. U.S. LNG contracts, by contrast, are based on a domestic price index. This insulates them from volatility in the oil market.

"LNG from shale producers is not always cheap," said Takashi Uchida, president of Tokyo Gas. "But we would like to stabilize the price by diversifying sources."

Though contracts with producers in the Middle East and elsewhere typically prohibit sales to third parties, U.S. LNG contracts do not. That would allow Japan to resell surplus supplies elsewhere, should its nuclear plants come back online.

China's demand for natural gas is rising, but Japan's is high and stable. Six major trading houses -- Mitsubishi Corp., Mitsui & Co., Sumitomo Corp., Marubeni, Itochu and Sojitz -- are expected to raise their total overseas LNG production capacity from 16 million tons as of March to 26 million tons by 2020, an increase of 60%.

Asia will take a growing share of the rising global output of natural gas. Anglo-Dutch energy producer Royal Dutch Shell has teamed with Malaysia's state-owned Petronas, Mitsubishi Corp., PetroChina and Korea Gas Corp., announcing an LNG project in British Columbia on Oct. 2. The $14 billion facility is expected to produce 14 million tons of LNG annually. Its location on the west coast of Canada means it will be able to ship to Japan in 10 days, compared with nine days for LNG from Australia.

Lim Jong-kook, senior executive vice president of Korea Gas, said in a statement that the project will "provide a great opportunity for Korea to diversify its LNG supply sources." Petronas President Tan Sri Wan Zulkiflee Wan Ariffin echoed the sentiment, saying the final investment decision "is a testimony [to] the strong collaboration among our partners and stakeholders, who share the same aspiration of delivering long-term value via LNG."