TOKYO/BANGKOK/PARIS -- The outbreak of African swine fever that is ravaging China's pig farmers is sending shock waves through Asia's market for imported meat. Importers in the region face a battle with Chinese buyers, while exporters reap a windfall.

The virus that causes ASF has no cure. Although it is harmless to humans, it is highly infectious and deadly to pigs.

China's latest outbreak struck in August 2018 and rapidly spread to 30 provinces. In January, the country's Ministry of Agriculture and Rural Affairs revealed that it has culled 900,000 pigs since the epidemic began.

Dutch bank Rabobank, estimates that China's hog herd will fall 30% to 40% this year versus 2018. "The pork meat production decline is expected to be between 9 million and 15 million tons, depending on the disease's development in the next few months," said Chenjun Pan, senior analyst for animal protein at Rabobank. "It's not very likely that the rest of the world will be able to fill the supply gap in China, given the sheer size of China's pork production."

According to U.S. Department of Agriculture, China's swine herd numbered 440 million head in 2018, or 60% of the world total. China produces around 54 million tons of pork annually, almost all of which is consumed domestically.

But the prolonged ASF epidemic threatens China's self sufficiency in pork. It has turned to the European Union, which is the world's top exporter and second-largest producer after China itself. Denmark, Spain and Germany are major exporters. 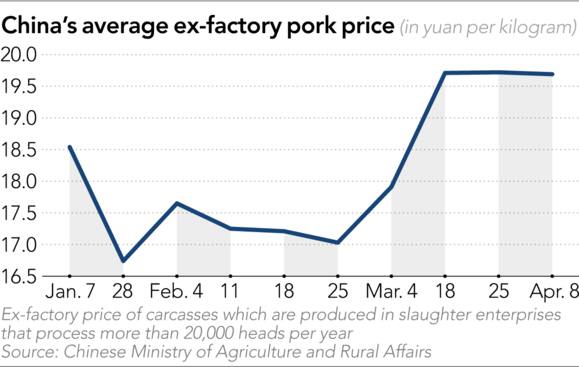 According to France's agriculture ministry, the country's pork exports jumped 51% on the year in January. "The spread of African swine fever in China could once again increase European exports to Asia," the ministry said in a statement in March.

The Breton Pork Market, in the French region of Brittany, which sets the price of pork in France, estimates total EU exports to China in January and February reached 270,000 tons, up 13% from the previous year.

Prices are rising in response to the sudden surge in demand. On April 4, France's national pork producers association recently tweeted that it was "pleased to see the increase in the pork price for four weeks."

The U.S., the No. 2 pork exporter after the EU, was hit by Chinese tariffs of 62% amid an ongoing trade dispute. But, said Naohiro Nimura, a commodities expert at Market Risk Advisory in Tokyo, "China will be forced to purchase more pork from the U.S. sooner or later, as it faces a serious pork shortage." The June price for lean hog futures at the Chicago Mercantile Exchange, hit 92.325 cents per pound on April 23, up 23% from compared with its March 4 low. 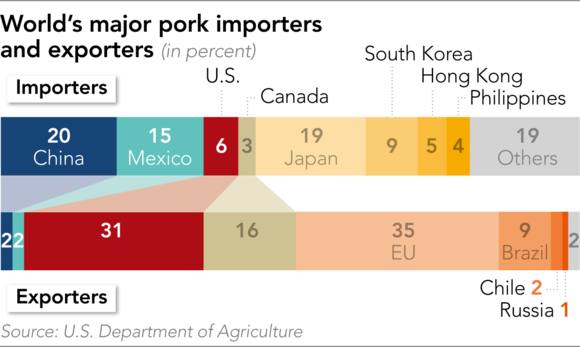 "It is getting harder to purchase pork, as the price has surged," said a buyer at Itoham Foods. The company makes a purchase agreement every three months with European exporters and has managed to complete a contract for April to June. Prices for pork belly, the main ingredient in bacon, jumped 30% from the previous contract. Prices for frozen pork from Canada and the U.S. are up nearly 30% as well.

Japan has a "gate price" system that shields domestic pig farmers from cheaper imports. The government sets a standard price of 546.53 yen ($4.89) per kilogram for imported pork and imposes variable tariffs, depending on the actual import price.

Despite these maneuvers, Japanese importers say clever product combinations will become harder as pork prices rise across the board.

Demand for meat has grown rapidly in Asia as populations and incomes have risen. According to the U.N.'s Food and Agriculture Organization, global meat production is projected to be 16% higher in 2025 than the average for 2013 to 2015. A shortage of pork will lift demand for other forms of protein.

"Poultry is the main substitute for pork, and poultry prices have already responded to the situation as they have been rising for a while," said Rabobank's Pan. A Japanese importer said prices for chicken imported from Thailand and Brazil have climbed 15% to 20% over the past few months.

Rabobank predicts demand for pork and poultry imports will also rise this year in Vietnam, which was hit by ASF in February.

The USDA forecasts that global chicken exports will rise 3% in 2019 to a record 11.6 million tons, while "Brazil and Thailand will make the greatest advances." Global imports are expected to surge nearly 70%, due to brisk demand in China. The USDA also predicts growth in beef exports and production, driven by China's growing demand for other types of meat. "China will increase beef imports as well, partly due to the shortage of animal protein and partly due to the closing down of 'gray market' channels," said Pan.

In Brazil, the world's biggest soybean exporter, market watchers believe exports for pig feed may decline. "We will certainly reduce our soy exports, but we will add value. Instead of selling soy at $500 a ton, we will sell the protein at $2,000 a ton, be it chicken, beef or pork," said Agriculture Minister Tereza Cristina on Monday.

In Thailand, the world's fourth-largest poultry exporter after Brazil, the U.S. and the EU, the slaughterhouse price for broilers was up 6% in March versus January. The industry forecasts broiler chicken exports will rise 2.3% on the year to 910,000 tons in 2019. Higher exports are likely to lift revenue at Thai chicken processors such as Charoen Pokphand Foods.

The pork industry, meanwhile, is bracing for a long struggle. To increase the number of pigs in China, farmers have to start by raising sows, which takes a year. Raising piglets for shipment requires another six months. "It will take years until we completely eliminate the impact of the supply cuts," said an importer.