SHANGHAI/TOKYO/HONG KONG -- Crude oil futures started trading in Shanghai on Monday to great fanfare, reflecting China's wish -- as the world's biggest oil importer -- to have more control over energy pricing. However, the ability to trade on home turf does not necessarily mean China will have a new benchmark anytime soon.

"It took 17 years for China's crude oil future trading to be launched on this day," Liu Shiyu, chairman of the China Securities Regulatory Commission (CSRC), said at the opening ceremony of the Shanghai International Energy Exchange on Monday morning, emphasizing the meaning for a country that is the biggest consumer of oil in the world. China imported 8.4 million barrels of oil per day in 2017, surpassing the U.S.

There was also political significance to the event, with the CSRC's Liu saying in his short opening speech that the newly appointed vice premier and main economic adviser to President Xi Jinping, Liu He, had handed down "important instructions" related to this new platform, and also twice mentioning its relevance to the latest communist party mantra.

In Hong Kong, China Petroleum & Chemical (Sinopec) Vice Chairman and President Dai Houliang vowed to "actively participate" in the new Shanghai market during a press conference for the oil group's latest earnings. As one of the largest traders of oil products in China, Dai stressed that the state-owned company would increasingly make use of the new platform in the coming days.

The Chinese government indicated its will to develop the market by allowing foreign players to directly participate in the yuan-denominated trading, in a country of capital controls and where stock market trading is limited to certain specified channels. The Ministry of Finance announced last Tuesday that it would exempt foreign investors from taxation on profit made on crude oil futures trading over the next three years.

But experts are highly skeptical that the new Shanghai market will quickly gain the clout of an international benchmark.

North Sea Brent crude traded in London and West Texas Intermediate in New York are the current international oil pricing benchmarks. Neither Shanghai nor any other oil futures market in Asia match them in terms of scale or influence.

Even if trading in Shanghai becomes active and transparent, questions have been raised over the physical delivery and storage of oil imports going forward. The Shanghai exchange has specifications such as the sulfur content of the crude oil listed for trading. While seven types of oil produced in the Middle East will be the primary deliveries, Takayuki Homma, head of economic research at Sumitomo Corp. Global Research said, "It is uncertain whether multiple crude oils will be mixed or not."

The Shanghai exchange has designated eight places for oil delivery, which are operated by six companies. But one crude oil trader said sellers will need to source empty storage tanks, while buyers will not know where they will receive the oil, or which type it will be. Some experts also pointed out that the fees for using the specified tanks are higher than in the U.S.

Another question is the liquidity of trading. Chinese authorities are highly likely to encourage domestic oil companies like Sinopec to use the new market and provide liquidity for them in the long term. Trading may be limited if not enough non-Chinese players take part.

"Foreigners may be a bit bewildered by yuan-denominated trading" due to the currency risk and the insufficient hedging tools, said Keisuke Nakazawa of the Chinese unit of energy broker Ginga Petroleum (Singapore).

On top of this, the region's trading habits and practices may not change overnight.

In Asia, crude oil is often procured through long-term contracts with oil-producing nations. Prices for such contracts are based on the average prices of Dubai and Oman crudes calculated by U.S. research firm S&P Global Platts. Saudi Aramco, the Saudi Arabian national petroleum and natural gas company, determines prices for Asia on the basis of Platts' prices.

The situation will be different if Saudi Aramco changes its pricing policy, said Takamichi Hamada, president and CEO of the Tokyo Commodity Exchange, which lists Dubai crude oil futures, but such a change is "unthinkable" for the time being. 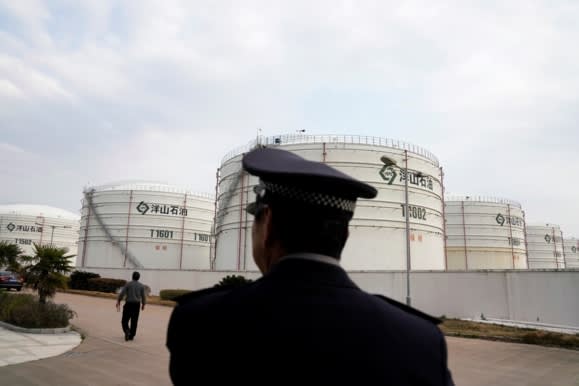 Oil tanks at a storage facility at Yangshan port in Shanghai.   © Reuters

Oil refineries in China are capable of processing three times more crude oil than those in Japan and account for more than half of Asia's total capacity. If the new oil futures market in China develops against the backdrop of huge purchasing power, both sellers and buyers will be able to cope with short-term changes in demand more effectively than before.

Unlike the U.S., Europe and oil-producing nations in the Middle East, China has the possibility of paving the way for setting prices based on supply and demand in areas of high consumption.

While the Shanghai market may become useful to other Asian countries as well, market participants are for now watching to see whether it will function smoothly.

Wang Dehua, chief financial officer of Sinopec, told reporters in Hong Kong on Monday that "it will be good for Chinese oil companies if this works out well," but he also thought any possibility of the Shanghai energy exchange becoming an influential market was something for the future.

One good sign for the Shanghai market operator was that commodity trader Glencore executed the first deal on Monday. However, trading volumes on the first day, were about 18 billion yuan ($2.87 billion), and according to Liu Qianrui, senior analyst at Shanghai East Asia Futures, this was "below market expectations."