TOKYO -- Fears of a fall in stainless steel demand are expected to limit a recent rebound in Asian prices of the alloy, in one of the myriad ripple effects from the newly escalating U.S.-China trade conflict.

Stainless steel coil is currently trading at around $2,000 per ton in Hong Kong, up about 5% from the bottom hit in January. The benchmark price of the base material had plunged 20% from last summer to the beginning of this year, reflecting concerns about the trade war.

The bounce is attributable to higher prices of chromium and nickel, which make steel resistant to corrosion. But trading houses and other market watchers believe the price rise will be capped by knock-on effects, with a glut in one place upsetting the supply-demand balance elsewhere.

An official at a Japanese trading house that deals in stainless steel is most concerned about China, the world's largest producer of the material. China's economic slowdown, exacerbated by the trade dispute with the U.S., has dampened brisk demand for stainless steel in a market that had previously been able to absorb the supply.

Some of the excess in China reportedly has been exported to Southeast Asia, South Korea and Japan. Meanwhile, Chinese authorities made a tentative decision in late March to impose anti-dumping duties on hot-rolled stainless steel from other countries including Japan.

"Amid a glut of Chinese-made steel, China's room for accepting imports may have narrowed," the trading house official said of the anti-dumping decision.

Stainless steel has a range of uses including kitchen instruments, home appliances and industrial machinery. The prices tend to reflect supply-and-demand trends and other market changes more than ordinary steel, because the market is smaller. 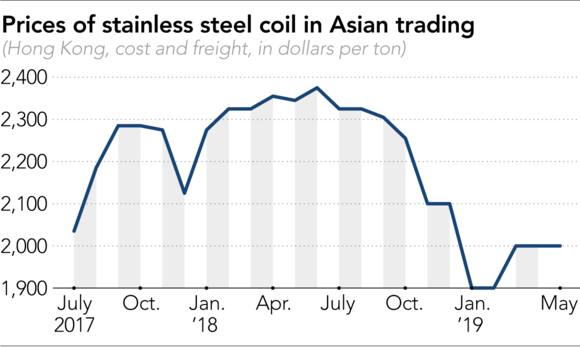 Market participants are also worried about Indonesia, where China's Tsingshan Holding Group, the world's largest stainless steel maker, began production in 2016. Tsingshan has since strengthened its output and export capacity in the Southeast Asian country. Products from the group's Indonesian plant are shipped to South Korea and elsewhere.

Room for exports to the U.S. is limited, since Washington slapped a steel import quota on South Korea. So Korean stainless steel products have been sent to Japan and other markets.

Japan's imports increased 7% on the year in 2018 to 222,159 tons. The increased imports and a buildup of domestic inventories pushed down Japan's secondary market prices last November for the first time in two years and 10 months.

There are glimmers of a turnaround in China, with demand apparently picking up since Chinese New Year in February. But concerns about the knock-on effects remain because Chinese demand still "lacks vigor," according to a Japanese trader.

Supply and demand within Japan itself is a issue. Industries such as construction and automobiles have a steady appetite for stainless steel, but orders are stagnating when it comes to semiconductor production equipment, machine tools and other sectors that rely on exports to China.

A trading house executive said manufacturers facing higher prices for materials like nickel are raising shipment prices, raising anticipation for higher prices "down the road." But market prices are expected to stay level, as hikes are offset by bearish factors such as increased inventories and weaker demand, the executive said.