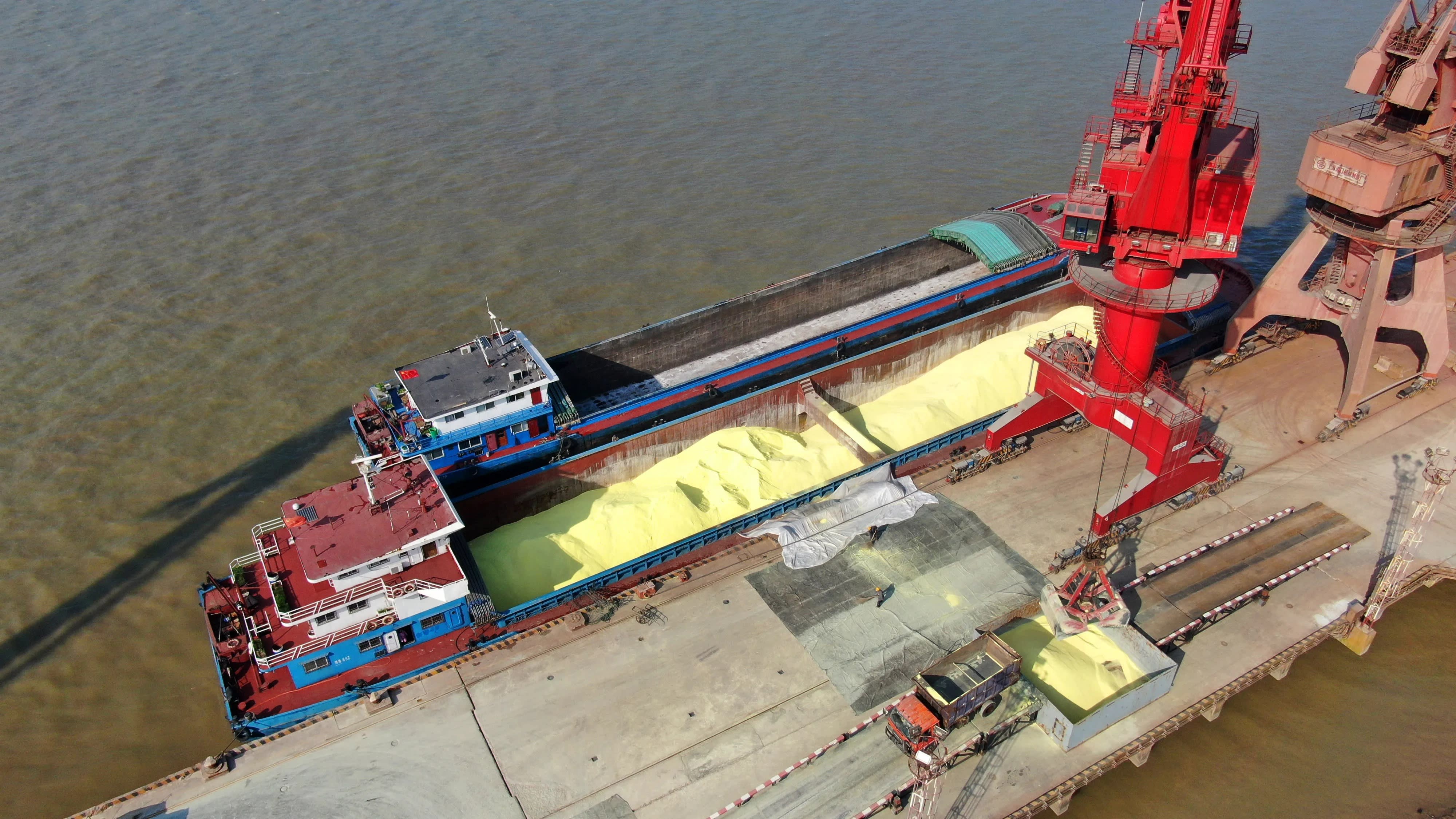 Sulfur being moved at a port in Nantong in China's Jiangsu province. China is the world's biggest consumer of sulfur, accounting for 30% of demand.   © Getty Images

TOKYO -- Sulfur prices are declining in Asia amid a buildup of inventories at ports in China, the biggest consumer of the chemical element, and sluggish Chinese fertilizer exports to India, a major farming country.

Sulfur, also spelled sulphur, is a pale-yellow, nonmetallic chemical element used widely in fertilizers and raw materials for chemical products, among other things. Slumping sulfur prices in Asia come at the same time as supplies of the element from oil and gas fields in the Middle East and elsewhere are increasing.

On top of that, there is a growing expectation that sulfur production during the refining of marine fuel will rise, due to incoming tougher regulations on the shipping industry on sulfur oxide emissions, putting further downward pressure on prices.

Sulfur is mostly processed into sulfuric acid and made into fertilizers and chemical raw materials. It is also used for the smelting of copper.

Global annual demand for sulfur amounts to somewhere between 64 million tons and 65 million tons. China accounts for just under 30% of total demand. 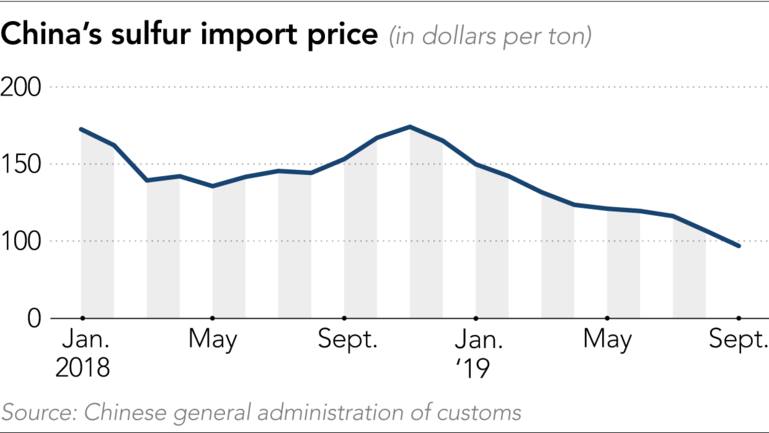 The main supply sources of sulfur are oil and gas fields and oil refineries. Sulfur is a by-product during the production of liquefied natural gas and the refining of oil.

In addition to oil- and gas-producing countries such as those in the Middle East, North America and Russia, sulfur-exporting countries include Japan and South Korea.

The sulfur market began to show signs of change in the early part of this year. Including freight rates, prices of solid sulfur destined for China, the international benchmark, edged down. The prices have now more than halved to around $50 per ton from the lower $100 range around April.

China's sulfur imports tumbled 41% in September from a year earlier to 590,000 tons.

The sharp decline in imports was due to swollen inventories. Normally, sulfur inventories rise in China in the later part of the year in preparation for an increase in fertilizer demand.

Fertilizer demand has peaked in China as the runoff of chemical fertilizers into the soil has been curbed. Major Chinese fertilizer manufacturers embarked on coordinated production cuts, resulting in a buildup of sulfur inventories due to weaker demand. New gas fields are expected to come online in the Middle East in 2020, resulting in an increase in sulfur production.   © AP

It has also been pointed out that major Moroccan fertilizer manufacturers have ramped up low-cost production, resulting in the international competitiveness of their Chinese rivals declining.

Global sulfur demand is growing at an annual pace of around 2%. But supply is likely to outpace demand temporarily in 2020. New gas fields are expected to come online in the Middle East, resulting in an increase in sulfur production.

The International Maritime Organization requires shipping companies to significantly cut the sulfur content of marine fuel from January 2020. The sulfur supply will rise if oil refineries increase production of low-sulfur marine fuel without changing the types of oil they use.

The shipping industry's response to that regulation alone is expected to lead to an annual sulfur supply increase of just over 1 million tons.

There is a growing view that sulfur prices will remain mired in the doldrums globally as China's inventory buildup shows no sign of shrinking and supply is expected to rise in 2020.