A deliveryman walks past a closed Luckin Coffee store at Sanlitun, as the country is hit by an outbreak of the new coronavirus, in Beijing, China.   © Reuters
SACHIHA KUROSE, Nikkei staff writerMarch 12, 2020 14:26 JST | China
CopyCopied

TOKYO -- The effects of the coronavirus have spread to the world's coffee growers, with the price of beans weakened by falling demand as consumers shun coffee shops and stay home.

China is the biggest importer of coffee beans from Brazil, the world's largest producer. But the coronavirus outbreak has caused a dramatic fall in demand, with Starbucks closing more than 2,000 outlets in China late January.

The decision "will lead to a decline China's coffee consumption," said a Japanese trader.

Added to slowing Chinese demand, Brazil is expected to yield a good crop in the year to September 2021, which could lead to oversupply.

"Coffee bean prices are expected to remain quitetop-heavy in the first half of the year," said a representative of trading company Marubeni. 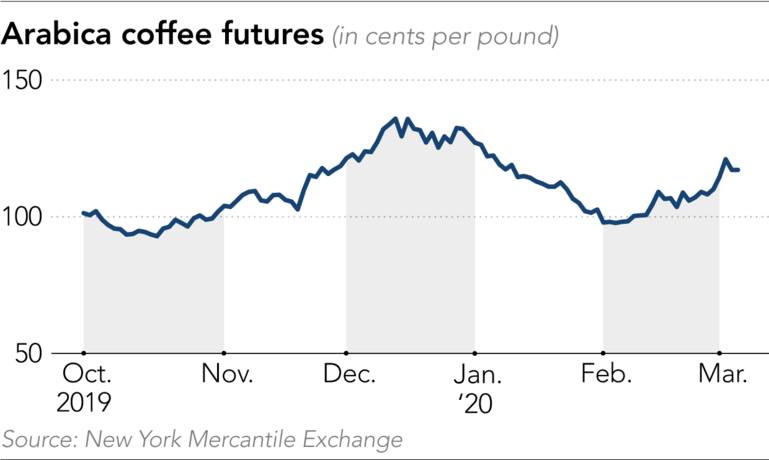 Chinese have warmed to coffee-drinking in recent years, with Starbucks opening outlets throughout the country and as local chain Luckin Coffee also became increasingly popular.

Before the coronavirus outbreak, the U.S. Department of Agriculture had forecast that China's coffee consumption would jump 51% to 3.3 million 60kg bags of coffee between September 2014 and September 2020.

But the spread of coronavirus is beginning to hinder that growth. Unlike in Japan where many consumers drink coffee at home, "most people drink coffee at cafes and restaurants in China," said Shiro Ozawa, an adviser for Tokyo-based specialty coffee trader Wataru and Co. 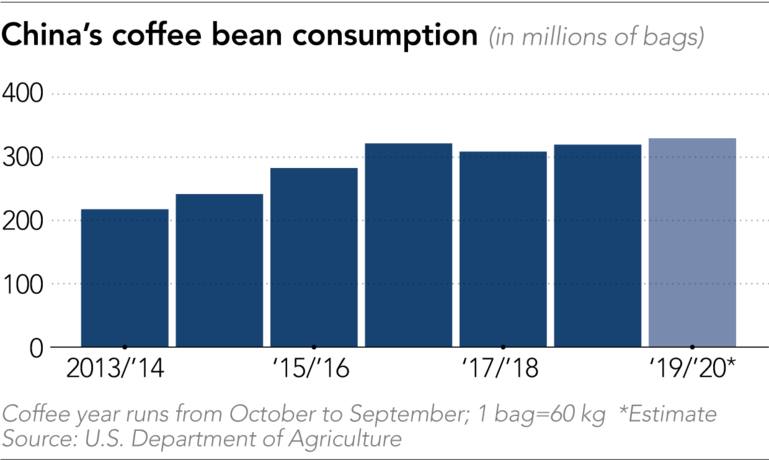 "People have refrained from nonessential dining out due to the new coronavirus, resulting in a sharp decline in coffee consumption at cafes and restaurants," said Kazuyuki Kajiwara, general manager at the beverage department of Marubeni.

The Japanese market is also starting to feel the effects. Although growth has slowed, Japan is still the world's fourth-largest consumer of coffee beans, with an estimated consumption of 8.1 million 60kg bags in the year to September 2020.

With the number of foreign visitors to Japan declining and many refraining from going out, "sales at hotels as well as restaurants and cafes in major tourist destinations have been falling," said a representative at a Japanese beverage company.

The share price of listed coffee chains in Japan has been hit by coronavirus. Shares in Komeda Holdings and GINZA RENOIR have fallen more than 10% from the end of 2019.

Global coffee consumption forecasts "could be revised downward as well," said Ozawa of Wataru and Co.

While coffee consumption is expected to decline globally, coffee-producing countries are forecast to have a record crop year. Many research companies expect that Brazil, the world's largest producer of coffee beans, will produce 67 million to 69 million 60kg bags of coffee in the year to September 2021,exceeding a record 64.8 million bags in the year to September 2019.

Vietnam, the world's No. 2 producer of coffee beans, is also expected to yield a healthy crop in that period. 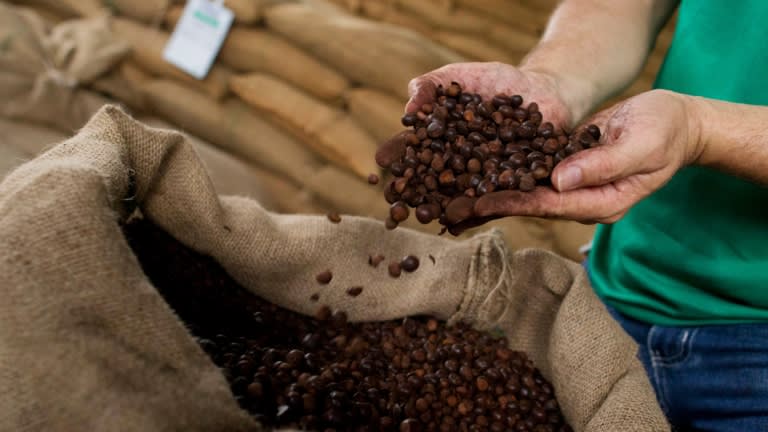 A worker shows roasted guarana seeds at a farm in Maues in the Brazilian Amazon.   © Reuters

While prices remain weak now, analysts said that if the virus continues to spread in coffee-producing areas after Brazil confirmed its first case of coronavirus on Feb. 26, a fall in supply could start to push prices up.

"The spread of the new coronavirus in coffee-producing regions, including Africa and Latin America, will need to be closely monitored," said Ozawa of Wataru and Co.