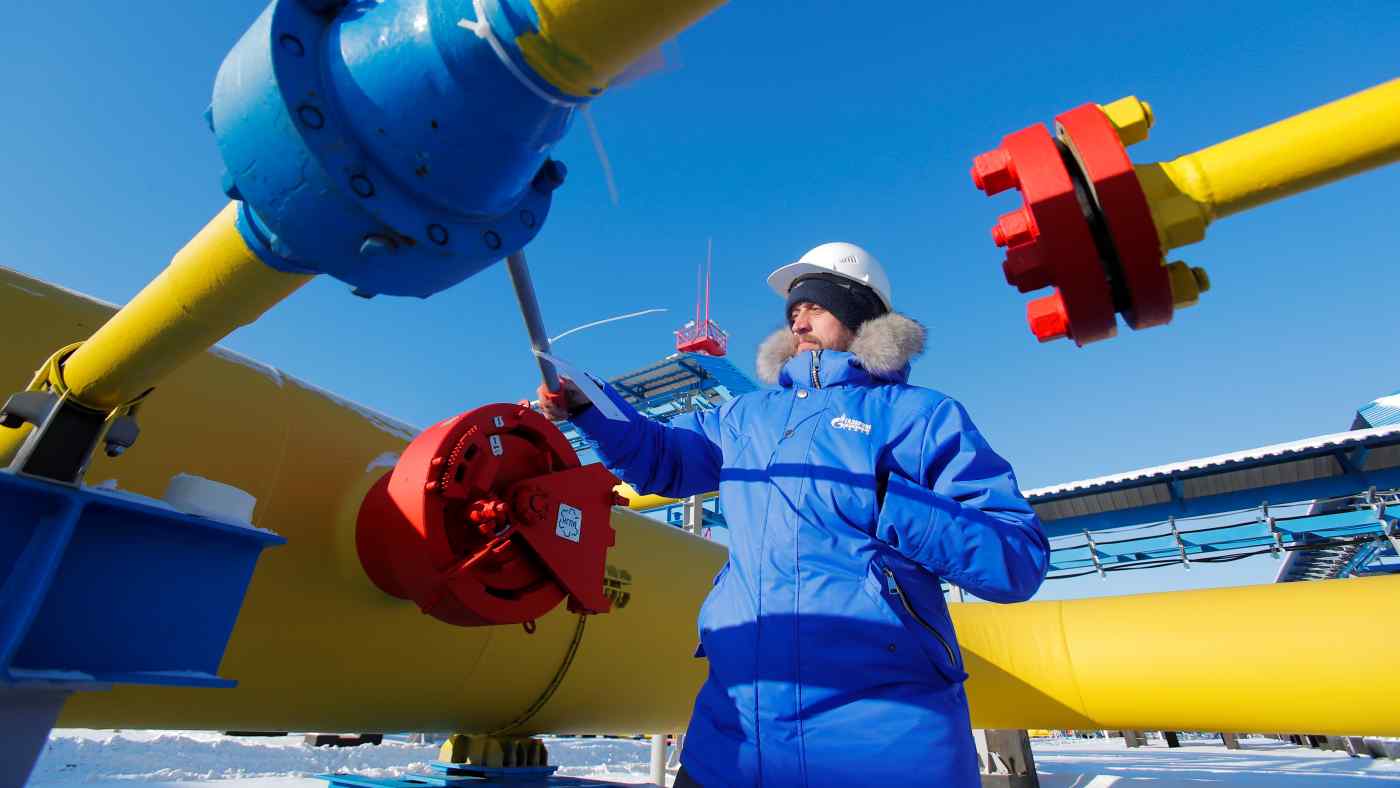 Gazprom is aiming to follow up on its Power of Siberia pipeline, switched on in December, with an even bigger project.   © Reuters
DIMITRI SIMES, Contributing writerMay 27, 2020 18:03 JST | China
CopyCopied

MOSCOW -- Russia's plans for a second gas pipeline to China are gaining momentum despite the coronavirus pandemic -- or, some experts argue, because of it.

Gazprom has begun design and exploration work on Power of Siberia-2, a new mega-pipeline that would deliver up to 50 billion cu. meters of natural gas annually to China, the Russian state energy conglomerate revealed last week. The pipeline, if built, would more than double Russia's gas exports to its neighbor.

The supply line is not expected to come onstream before 2030, and even that is assuming the two sides sign a contract in the near future. Yet industry watchers say the coronavirus and the ensuing flare-up in U.S.-China tensions have provided economic and geopolitical impetus for the project, pushing Moscow and Beijing toward a deal.

The two have been in talks over Power of Siberia-2 for years. Gazprom initially envisioned building the pipeline across the Altai Mountains to connect gas fields in Western Siberia with China's Xinjiang Province, but this proposal encountered skepticism from Beijing. To revive the negotiations, the Russian gas monopoly proposed a new route at the end of last year, one that would instead pass through Mongolia and deliver gas directly to densely populated areas in central China.

This would be a sequel to the Power of Siberia-1 pipeline, launched in December. Under a $400 billion agreement inked in 2014, Gazprom committed to supplying China with up to 38 billion cu. meters of gas annually for 30 years.

"Gazprom sees that its position in the European market is eroding over the long run because of growing competition and a drive by some countries to reduce dependence on Russia," said Alexander Gabuev, a senior fellow at the Carnegie Moscow Center, explaining the company's shift toward China. "Meanwhile, Gazprom has to market gas from fields in Yamal and Western Siberia, and China is the big market next door."

The pandemic has only created a greater sense of urgency for Gazprom to expedite this pivot. Chinese President Xi Jinping takes part in the launch ceremony for Power of Siberia-1 via video link in December.   © Reuters

As demand for Russian gas in Europe plummeted due to the crisis, the company's leadership began looking east for potential victories, said Igor Yushkov, a senior analyst at the Moscow-based National Energy Security Fund.

"To preserve his job and influence within Russian leadership, [Gazprom CEO Alexey Miller] must show Putin some good news," he said. "Since there is not a lot of good news in the current situation, I think it is logical for Miller to try and make some progress on Power of Siberia-2."

At the same time, Gazprom has been fast-tracking major investments into gas fields and processing centers that service Power of Siberia-1. The company has ramped up production drilling at several fields connected to the pipeline, and is building new power and compressor stations.

Gazprom has resisted slowing down these efforts over health concerns. In mid-April, several workers at the Chayandinskoye gas field -- a key resource base for Power of Siberia-1 -- were diagnosed with the coronavirus. Although management formally instituted a quarantine, work at the field continued and 10,000 workers remained stuck together in cramped living conditions.

Tensions mounted over the subsequent weeks, as hundreds of workers joined protests demanding greater safety measures. Management eventually relented and halted work at the field in early May, after mass testing revealed that over 3,000 workers were infected.

When it comes to Power of Siberia-2, experts caution it will take more than just persistence to make the project a reality. Gazprom must first strike a new gas supply deal with China -- no easy feat.

"Building the pipeline system itself is definitely feasible, but the question is when the Chinese will want to buy the gas and at what price," said James Henderson, director of the natural gas program at the Oxford Institute for Energy Studies. "That's an issue that has always stalled negotiations in the past."

But Gazprom appears to have one thing working in its favor: the growing rift between the U.S. and China. "If it were not for this conflict between the United States and China, it would certainly be harder for Russia to sign new gas deals with China," Yushkov said. "Russia can play on China's fears [of the United States] to move ahead in negotiations."

The pandemic has exacerbated the tensions between Washington and Beijing, with each side accusing the other of mismanaging the crisis. One of the possible casualties of this recent downturn in relations is the Phase 1 trade deal signed by the two countries earlier this year, which includes a pledge by China to purchase $52.4 billion in American energy exports over the next two years.

Although China has insisted it remains committed to the agreement, it has fallen behind on its promised imports of U.S. goods due to the virus. Meanwhile, U.S. President Donald Trump has admitted that his enthusiasm for the deal has waned and threatened to reimpose tariffs if Beijing fails to meet its purchasing targets.

Should ties with Washington continue to deteriorate, China will increasingly look to Russia for help in meeting its energy needs, said Lin Boqiang, dean of the China Institute for Studies in Energy Policy at Xiamen University.

"Before the current situation between China and the United States, China was planning to buy a lot of energy from the United States because of the trade agreement," he said. "But now the situation looks uncertain, and that will certainly encourage China to cooperate more with Russia."

As for Power of Siberia-2, Lin predicted that China and Russia would ultimately agree on a contract despite the obstacles.

"Negotiating a price will not be easy," he said. "But since both sides are interested, I think they will eventually reach some sort of agreement."