TOKYO -- Global cotton prices have plunged, hit by the effects of the U.S.-China trade conflict along with swelling American production.

Cotton futures on the New York market dropped to around 65 cents per pound on May 13, touching the lowest level since August 2016. Prices of raw cotton -- the material for cotton fabric -- had been rising from February to early April, based on optimism that U.S.-China relations would improve. But the prices have since fallen off by 17%.

China accounts for one-third of global cotton consumption, importing the material from the U.S. and Brazil. The world's No. 2 economy also distributes cotton thread domestically for manufacturing cotton fiber products, before exporting the finished goods to the U.S. The U.S., for its part, ranks third among raw cotton producers behind India and China, and is the top exporter of the material.

The tensions between two powers that depend on each other in the cotton trade are pressuring global prices and could cause upheaval in the garment business.

Last summer, China imposed a 25% retaliatory tariff on U.S.-produced cotton and other products. For the period from August 2018 to March 2019, China imported 180,000 tons of raw American cotton, roughly half the amount recorded in the same period a year earlier, according to the International Cotton Advisory Committee. China has been procuring more from Brazil and other countries as a substitute. 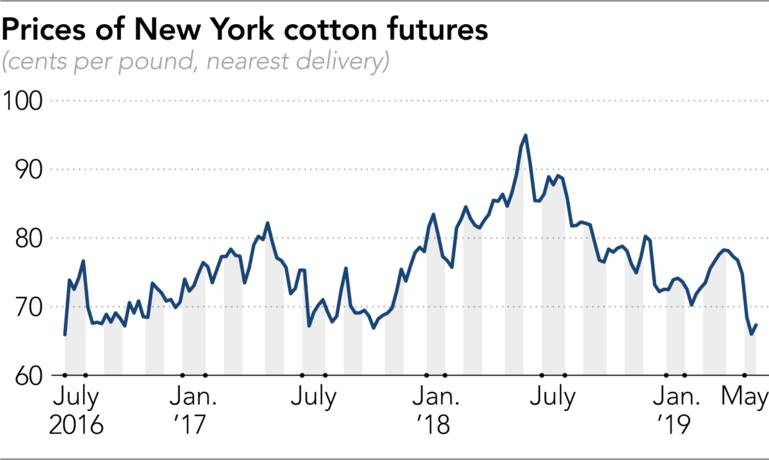 On the other hand, the U.S. has been slapping tariffs on cotton thread and other fiber products imported from China, raising concerns over a decline in demand for these goods.

President Donald Trump's administration on May 13 announced plans to impose a fourth round of tariffs against China, applying duties on around 3,800 items including clothing. Coupled with China's rising labor costs, "the garment industry may accelerate its relocation from China to Vietnam and Cambodia," where labor costs are lower, according a source from a specialized trading company.

Another concern looming over the cotton market is increased U.S. production.

In the Northern Hemisphere, planting begins in the spring and raw cotton is harvested in the fall. U.S. output is forecast to jump 20% to 22 million bales in the year from August to next July, according to World Agricultural Supply and Demand Estimates released by the U.S. Department of Agriculture on May 10. A bale equates to 217 kilograms.

Weather conditions in producing areas have been stable and "planting has been progressing as normal," according to Tsutomu Kosuge, chief executive of Marketedge, a financial and commodities market research company in Tokyo.

The impact of the market trends is reverberating outside the U.S. and China. In Japan, prices of domestically produced cotton thread are under pressure from imports of cheaper Vietnamese and Indonesian products. The Southeast Asian countries are exporting more to Japan to compensate for the decrease in exports to China, as the global hub of the garment industry imports less thread.