Massive price increase to remain until production returns to normal

The agreement, brokered by the national government, has paved the way for the resumption of operations as early as next week at tea estates, which had been idled since the strike began.

Because the harvest season has already ended, the supply of tea leaves is expected to resume next spring at the earliest, according to an industry official. 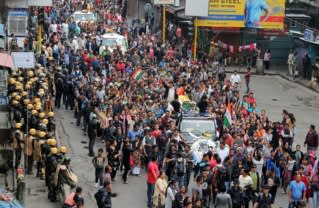 Supporters of the Gorkha Janmukti Morcha rally carrying the bodies of protesters killed in clashes with security forces in Darjeeling, India, in June.   © Reuters

The demand for a separate state came on the heels of a new policy introduced by a state government in West Bengal -- to which Darjeeling belongs -- to make Bengali a compulsory language to use at public schools. In their protest against the decision, members of the region's majority Nepali-speaking community staged the strike,  calling for establishment of the separate state of Gorkhaland in early June.

Eleven people died in a clash with security forces.

More than 70,000 workers from all 87 tea estates joined the protest, halting production at the estates for about 100 days.

Although the strike is over, Darjeeling tea-leaf supplies will not resume soon.

In an interview with the Nikkei Asian Review, Kaushik Basu, assistant to chairman of the Darjeeling Tea Association said: "There will be a lot of weeds, [as plantations] have been left unattended for long ... after [cleaning work] the plants will have to be pruned, and pest removal will have to be done."

Tea leaf production in Darjeeling totaled 8.5 million kg in the year ended March 2017. Half of this was exported, mainly to Europe.

Total production for the year ending March 2018 will, Basu said, "go down by 50% as compared to last year. This is what we expect ... [but] there are no exact numbers [yet]."

Some think that production would decline as much as 80% this year.

To lure workers back, each garden began offering bonuses on Tuesday, as has been done at this time of the year in the past, Basu said. But he noted that "there has been no revenue, so there could be a situation where some gardens are unable to pay workers."

According to Birup Chakravarty, a trader in the eastern city of Kolkata -- the hub for trading tea leaves -- the average price of Darjeeling leaves was about 500 rupees ($7.61) per kilogram in May. Following the strike, however, supply has been unable to keep up with demand.

This has caused the price to more than double to about 1,000 rupees-1,200 rupees per kilogram.

Since supplies will be delayed until next spring or later, it will take some time before prices return to normal.