Despite high import tariffs, China is still buying from the US TOKYO -- Health-conscious Chinese are helping to prop up the prices of nuts, in particular, that of almonds as bad weather puts a squeeze on supply.

Chinese demand is so strong that China is even importing U.S.-produced nuts, on which Beijing had hiked already high tariffs to 60% in September in retaliation against similar action from the U.S.

After surging to a high of around $3.60 per pound (453 grams) in July, almond prices are now hovering around $3.45, which still represents a 15% rise from a year ago and around 8% higher than in the May-June period.

Analysts expect that this year's harvest, completed in October, would yield 2.3-2.35 billion pounds, in line with forecasts and expectation. The U.S. produces about 80% of global nut supply, with the state of California the biggest producer in the world. In early spring this year, some production areas in the U.S. suffered a long cold and rainy spell, causing almond blossoms to rot.

Against that backdrop, almond demand worldwide remained strong. In the U.S., almond milk and almond butter are gaining popularity as consumers look for dairy alternatives. In the West, almond milk is often preferred over soy milk, which is commonly consumed in Asia. In China, almonds are also now increasingly used in bread and confectionary.

Despite China raising levies on U.S. almond imports to 60% from the 50% it imposed in the summer of last year, an official at a trading company said: "The shipment decline was smaller than had been expected." The Almond Board of California, an industry group, said shipments to China and Hong Kong in the year to August 2019 fell 25% from the same term a year earlier.

China has also been buying Australian almonds on which it hasn't imposed any import tariffs. Although Australia set selling prices for China at a higher level than for other countries, they are still lower than those of U.S. almonds. The Almond board said that U.S. almonds' exports to China and Hong Kong in the three months to October 2019 were up as much as 29% from a year earlier.

The trend is similar in the walnut market. In the U.S., the world's second largest producer of walnuts, authorities forecast in September that the annual walnut yield would fall to 630,000 short tons (about 570,000 tons), down 9% from a July forecast, due to unfavorable weather in California. Walnut prices are hovering around $3.50 per pound, up 40% from a year earlier.

Although the world's largest walnut producer is China where Yunnan Province is a main production site, the official from the trading company said that Chinese confectioners still prefer the U.S. variety of the nut, which is subject to import tariffs of 70-75%.

Chinese demand has also supported the prices of other nuts. For example, macadamia nut prices have doubled to $20 per kilogram from a decade ago. The two leading producers, Australia and South Africa, currently grew some 100,000 tons of unshelled macadamia nuts in total. Around one-third of that was imported by China.

Cashew nuts prices are also strong, although they are off a peak of around $5.50 that was reached in the spring of 2018. They are now trading at around $4.10, which is still high compared over a 10-year period. 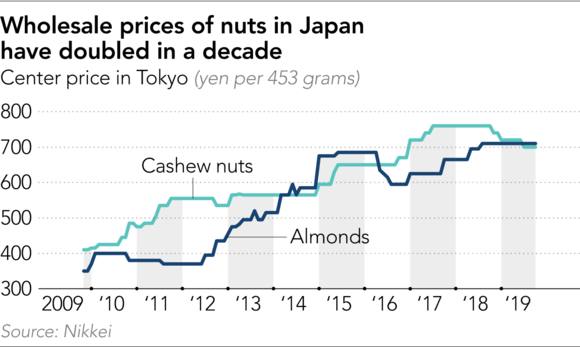 With a rise in the international prices of nuts, their wholesale prices in Japan continue to stay high. Almond prices in Japan, which relies on imports for most of its consumption, have about doubled from a decade ago. But the trading house source said: "An increase in import prices has not been fully passed on to domestic wholesale prices because of intense competition."