Market for bellwether metal too bullish for some to believe

TOKYO -- International copper prices are rapidly recovering, with three-month futures on the benchmark London Metal Exchange hitting a two-year high of $6,633 per metric ton on July 13.

Taken at face value, recent price movements on the LME mean the global economy has recovered to where it was before the coronavirus struck. But this time, maybe Dr. Copper is wrong.

Before the pandemic, copper prices were already trending down, hitting a 40-month low of $4,371 on March 19.

After the lockdown was lifted on April 8 in the Chinese city of Wuhan, where the contagion first broke out, virus-slammed Western economies soon followed, sending copper prices skyrocketing 50%.

Copper prices even topped a 2019-high when U.S.-China trade tensions were boiling. 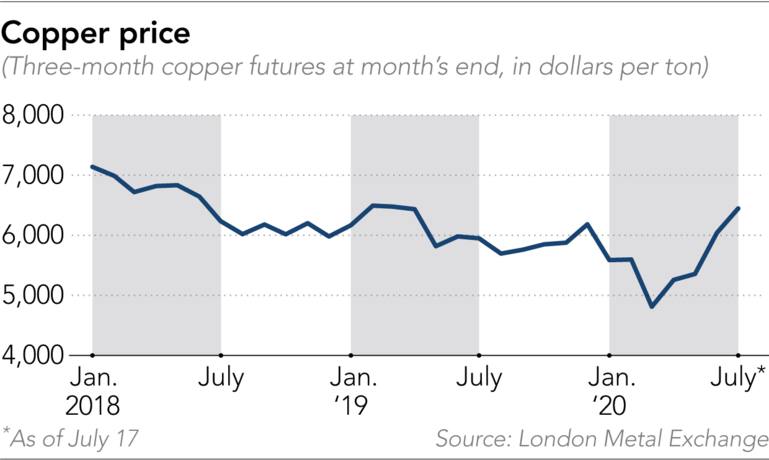 Countries are restarting their economies after having weathered the worst of the crisis. But that should not justify copper prices at levels seen two years ago, raising suspicions that the market is "too bullish." And U.S.-China relations are worsening over Hong Kong, further weakening the case for the metal's rise.

Three factors may be at play.

One is that copper prices reflect mainly the health of the Chinese economy, which has benefited from Beijing's all-out efforts to get the country working full time again. China accounts for half of global copper demand, or about 23 million metric tons annually. Its manufacturers were the first to reopen among major economies, thanks to massive government infrastructure investment.

Additionally, iron ore spot prices rose above $100 per metric ton for the first time in 10 months in June while charter rates for ships to transport iron ore and coal rallied more than 10-fold, compared with this year's low.

China still produces copper from imported scrap but has been transitioning to imports of copper metal and copper concentrate. In the past, monthly imports of the concentrate have been about 1.3 million metric tons and 450,000 metric tons for the metal, according to Takayuki Honma, chief economist at Sumitomo Corporation Global Research.

The situation has helped push up three-month futures on the LME.

The third factor lies with supply disruptions that have occurred in copper-producing countries like Chile as the impact of the pandemic deepens.

Chile's state-run Codelco, one of the world's top copper producers, announced in late June that it would suspend some operations at its Chuquicamata mine in the northern part of the country.

"When you look at the commodities market, you need to pay close attention to environmental differences between the Northern Hemisphere and the Southern Hemisphere in the future," said Naohiro Niimura, a consultant at Market Risk Advisory.

Commodity-consuming nations in the West, along with China and Japan in the East, are in the Northern Hemisphere and have large populations, while many resource-rich countries, including Brazil, Chile, Australia and South Africa, are in the Southern Hemisphere.

While the economies of commodity consumers -- especially China -- are restarting, resource-rich countries in the South are still struggling to reopen, making the ability to meet rising demand questionable.

Niimura thinks the contrasting situations have pushed copper prices beyond levels than what would normally be considered normal under the actual state of the world economy.

Rising iron ore prices are also the result of uncertain supplies from Brazil and elsewhere amid strong Chinese demand.

Given that the coronavirus has continued to wreak havoc in the Northern Hemisphere despite the arrival of summer, it is far from clear whether warmer temperatures can help slow the contagion.

Niimura said he could not rule out the possibility that next winter may see further economic stagnation in the Northern Hemisphere as countries impose lockdowns, while resource-rich Southern countries get back on their feet only to be met by lackluster demand.

If that happens, copper prices will most likely post a reactionary decline.