TOKYO -- International expectation is growing over whether China will abolish rare earth export duties following the January removal of quotas on such materials leaving the country.

The world's largest producer of rare-earth materials scrapped its quotas on them after the World Trade Organization determined that the China's export controls violated trade rules in its decision on a dispute settlement filed by Japan, the U.S. and the European Union.

The removal of export quotas has brought about no major changes to export levels or prices of rare earths as yet because annual export levels have remained below the country's limit in recent years. 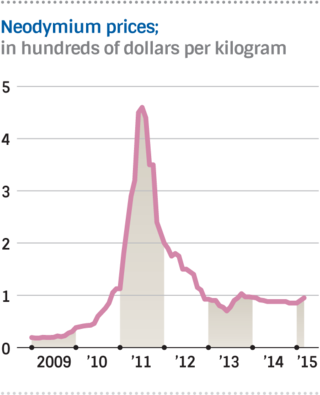 Rare earths are a group of 17 chemical elements found in the Earth's crust and vital in manufacturing many forms of modern technology.

The price of neodymium, which is used in products such as magnets for hybrid-car motors, has stayed around $90 to $100 per kilogram over the past two years. The price range is one-fifth the level it was in 2011 when tensions between Japan and China intensified over a territorial dispute regarding a group of uninhabited islands in the East China Sea administered by Japan but claimed by Beijing and Taiwan.

For 2014, China set a neodymium export quota of around 30,000 tons. However, according to Japanese rare earths trading house Samwood, purchases of the rare metal will remain almost unchanged.

At the moment, it is China's duty on rare-earth exports which market players are focusing on. The export taxes currently range from 15-25%. Following the WTO ruling that the tariffs violate its rules, China is widely expected to cut the export taxes soon.

If China does lift its duties, international prices for rare earths will drop.

Shigeo Nakamura, president of Advanced Material Japan, a Tokyo-based trading house specializing in rare metals, said that the prices of such materials will most probably "decline in stages" before China's expected removal of export tariffs in May.

In a related development, Hitachi Metals in February announced an agreement with a Chinese company to start negotiating for the establishment of a joint venture in China for the production and sale of magnets made from rare-earth materials.

The Japanese company, which has been manufacturing rare-earth-based magnets in Japan and the U.S., decided to expand operations to China as a strategic move to ensure the procurement of raw materials in expectation of increasing future demand.

China is widely expected to introduce resource and environment taxes to replace the export tariffs. But even if new taxes are imposed, the removal of export duties is likely to almost eliminate the gap between prices paid by Chinese companies for rare earths and those paid by Japanese companies to import the metals.

Given Japan's advanced technology in the field of motor magnets, the expected abolition of Chinese export tariffs on rare earths will be a boon for companies in the field, helping to enhance their price competitiveness.

Rare earths are expected to arouse stronger demand in China than in Japan. In response, Japanese companies are likely to choose where to establish new production bases in China depending on access to the rare earth materials as well as the costs involved.