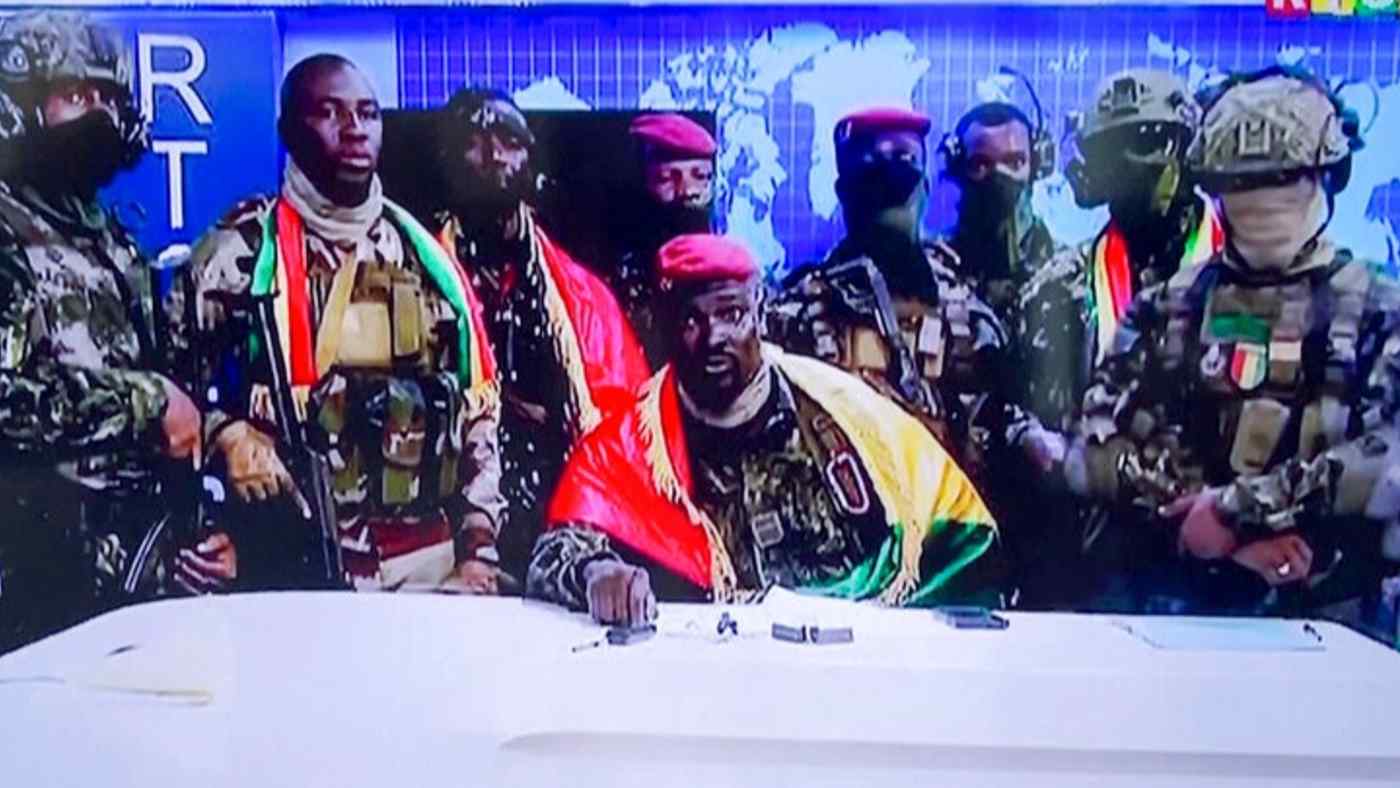 In this image made from video, Lt. Col. Mamady Doumbouya, center, commander of the army's special forces unit, surrounded by others and draped in a Guinean flag, makes an address to the nation from state television headquarters in Guinea's capital, Conakry, on Sept. 5.   © AP
TAKESHI KUMON and IORI KAWATE, Nikkei staff writersSeptember 8, 2021 02:23 JST | China
CopyCopied

CAIRO/BEIJING -- The coup in Guinea appears likely to keep aluminum prices at historic highs for the foreseeable future, as the West African country -- home to the world's largest reserves of bauxite -- is mired in political uncertainty.

No country will be impacted more than China, the leading aluminum producer globally and the biggest consumer of bauxite, from which the production material is derived.

Sunday's coup also may have implications for Beijing's geopolitical strategies. Any inability to import resources from Guinea inevitably will raise China's dependence on Australia, a country with which Beijing's relations have soured over Canberra's call for an independent investigation into the origins of the coronavirus.

It was a rare condemnation from Beijing, which advocates for noninterference in the internal affairs of other countries.

Aluminum is used in a host of products from construction material and automobile parts to drink cans, all which are important to China.

Prices for aluminum ore bauxite from Guinea hit their highest in almost 18 months in China on Monday, though no mines reported any disruption. Even before the coup, international aluminum prices had touched a high not seen in a decade. Droughts in China caused power shortages that led to disruptions in aluminum output. 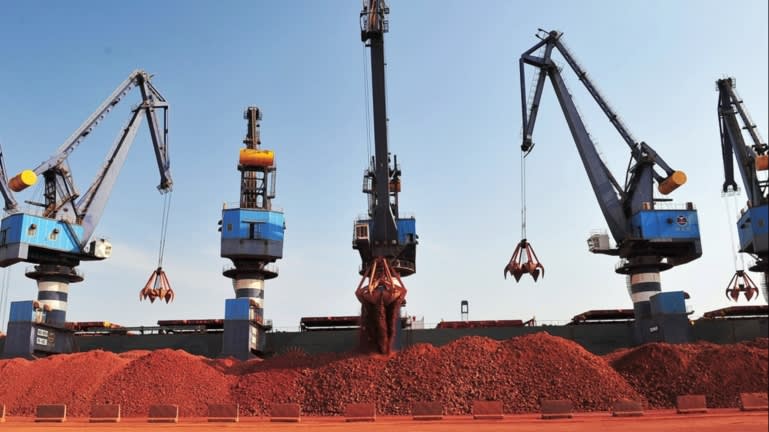 A ship carrying bauxite from Guinea is unloaded at a port in China's Shandong Province. The Asian nation relies on Guinea for nearly 60% of its bauxite imports.   © Reuters

Guinea accounted for 55% of the bauxite imported by China in the January-July period, according to China's General Administration of Customs. The high resource prices are set to bite China as the country prepares a new wave of infrastructure investments to prop up an economy showing signs of a slowdown.

If China were to seek alternative sources of bauxite, Australia waits in the wings. Canberra accounted for 31% of Beijing's imports in the same period.

Bilateral tensions escalated in April 2020 after Australia called for an independent, international inquiry into the origins of COVID-19. Upset that it was not consulted beforehand, China has since engaged in what some call economic warfare with Australia, restricting imports on a wide range of items including resources.

In the long term, Beijing saw Guinea as an alternative source for iron ore, a key material in steelmaking. China relies on Australia for more than 60% of its iron ore imports, and the resource has been one of the few items not to fall under an import ban.

Guinea is home to Simandou, a 110 km range of hills said to hold the world's largest reserve of untapped high-quality iron ore. If China could help Guinea unlock this potential, it could elevate the West African country into an iron ore export powerhouse alongside Australia and Brazil.

This economic potential has led China to become one of the biggest funding sources for Guinea. In 2019, Guinea's outstanding debt obligations to China equaled 5% of its gross domestic product, according to the World Bank. That share exceeds the debts owed to the World Bank or the International Monetary Fund.

Chinese President Xi Jinping established a close relationship with Conde, Guinea's now-deposed president. The two men have met on multiple occasions. Last year, Xi was quick to send a message congratulating Conde on his third presidential election victory, despite accusations from the opposition of fraud.

Conde's October 2020 election win was made possible by constitutional changes he rammed through, allowing for a third term. The results touched off protests among citizens and deadly clashes with security forces. Chinese President Xi Jinping talks with Guinean President Alpha Conde, left, and Jacob Zuma, then the president of South Africa, at a Group of 20 meeting in Germany in July 2017.   © Reuters

Xi has said he wants to promote greater development of the "comprehensive strategic cooperative partnership" between the two countries. Guinea was one of the first countries to receive Chinese-made COVID-19 vaccines in March.

Pandemic-related woes, as well as rising taxes and fuel prices, exacerbated public grievances with Conde's government. Things came to a head on Sunday when an elite army unit led by Lt. Col. Mamady Doumbouya carried out the coup.

Heavy gunfire erupted near the presidential palace, and a video depicting Conde detained by soldiers circulated on the internet. The junta suspended the constitution and dissolved the government.

"We will no longer entrust politics to one man," Doumbouya said in a speech broadcast on state television Sunday.

Doumbouya said Monday that a committee set up by the junta will safeguard existing business enterprises in Guinea, according to an Agence France-Presse report.

"The committee assures partners that it will respect all its undertakings," said Doumbouya, the message directed to foreign investors. This suggests that whoever assumes the seat of power will be compelled to maintain trade relationships to earn foreign currency.

The citizens of Guinea's capital, Conakry, appeared to welcome the takeover. But the coup has drawn a drumbeat of denouncements from the international community.

"I strongly condemn any takeover of the government by force of the gun," United Nations Secretary-General Antonio Guterres tweeted.

"Violence and any extra-constitutional measures will only erode Guinea's prospects for peace, stability and prosperity," reads a statement from the U.S. State Department.

The African Union and the Economic Community of West African States also censured the coup.