One of the world's top private oil traders, the collapse of Hin Leong is one of the largest trading failures in Singapore history.   © Reuters
DYLAN LOH, Nikkei staff writerMay 4, 2020 11:03 JST | Singapore
CopyCopied

SINGAPORE -- To many Singapore observers, the most unsettling aspect of the collapse of Hin Leong Trading was not the speed with which volatile markets pushed one of Asia's biggest private oil traders $4 billion into the red.

More worrying was the admission from the company's billionaire founder Lim Oon Kuin, one of Singapore's most respected business leaders, that he had directed his finance department not to disclose $800 million worth of trading losses.

When Singapore's founder Lee Kuan Yew led the tiny city-state out of the Malaysian federation in 1965 to create Southeast Asia's newest independent republic, he embarked on a strategy of reputation building that would eventually help the young nation stand out from its peers.

As its neighbors the Philippines, Indonesia, Thailand and Myanmar languished under oppressive dictatorships and an absence of the rule of law, Singapore's reputation for integrity and financial probity helped it soar ahead to become Southeast Asia's financial and commodities trading capital.

But as Lee Kuan Yew's son and Singapore's current Prime Minister Lee Hsien Loong prepares to hand over the reins to the so-called fourth generation of leaders, a string of high profile corporate collapses and a faltering economy have put the country's reputation on the line. "To me, this is a wakeup call about our regulatory framework for private companies," Mak Yuen Teen, associate professor of accounting at the National University of Singapore Business School, told the Nikkei Asian Review. "As we see here, they could be huge but yet subject to little checks and balances."

Over the years Lim expanded the business into an empire that involved not just the buying and selling of oil, but lubricant manufacturing, on-shore distribution and storage, as well as ship chartering and management.

But while the success of the business propelled Lim to the upper ranks of Singapore's rich list -- Forbes currently estimates his net worth at $1.3 billion -- court documents indicated that Hin Leong Trading had failed to turn a profit in recent years.

The sudden crash in oil prices brought about by the onset of the coronavirus pandemic left Hin Leong disastrously exposed.

"I had given instructions to the finance department to prepare the accounts without showing the losses and told them that I would be responsible if anything went wrong," Lim admitted in court documents which showed that Hin Leong had racked up around $800 million worth of losses.

With total liabilities amounting to around $4 billion against assets valued at just $714m, Hin Leong filed for bankruptcy protection last month, sending shockwaves through the industry and leaving a clutch creditors that includes some of the biggest names in Asian banking.

"Hin Leong basically pushed the banks into reconsidering their positions," Singapore-based oil trader Oliver Wolter told Nikkei. "The independent oil traders at the moment are not very happy people, to be honest, because the market is seriously down." 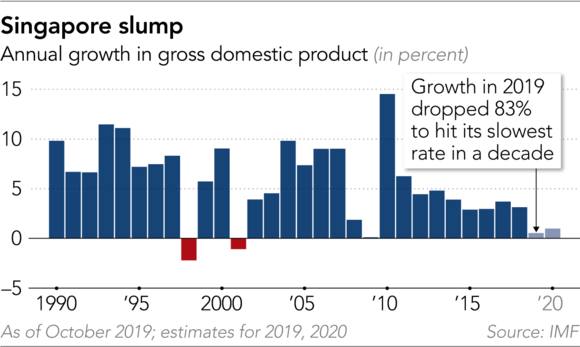 Singapore authorities, meanwhile, are scrambling to limit fallout from the scandal, with three government agencies -- Enterprise Singapore, the Maritime and Port Authority of Singapore and the Monetary Authority of Singapore -- announcing that they were closely monitoring developments concerning Hin Leong and the impact of the company's collapse on the wider oil trading scene.

Singapore maintains that its oil trading industry remains resilient despite Hin Leong's collapse and the challenges posed by the drop in global demand for energy.

Taking advantage of its location at the nexus of several major Asian trade routes, Singapore's highly-developed infrastructure and the availability of skilled talent pool have been key draws for oil and gas players.

Last year the commodities trading sector contributed to 4.5% to the city-state's Gross Domestic Product, generating SG$20.3 billion in value and employing over 15,000 professionals.

"Singapore has an added advantage of a hub that offers a neutral playing field for commodity traders with no single producer or consumer who can dominate the market," International Enterprise Singapore said in a recent paper, noting that the country's finance, trading, legal, regulatory and tax frameworks gave it a competitive edge.

While the paper emphasised the participation of varied oil and gas players interacting within the Singapore ecosystem as an attribute, it did not delve into how well the different entities were run. Hin Leong's collapse has exposed a weak link in the country's commodities sector.

The Hin Leong scandal is also a reminder of the collapse of another commodities giant, Noble Group, whose shares have since been suspended on the Singapore stock exchange. In Noble's case, the company exploited complex accounting standards and stretched those to what could be argued as fraudulent, said the National University of Singapore's Mak Yuen Teen.

"In terms of similarities (between Hin Leong and Noble), it both goes down to dominant founders who continue to operate with little checks and balances as the business grows," Mak told Nikkei.

Given the current turbulence roiling world energy markets, Hin Leong may be just another name on a list of distraught commodities players that is set to grow longer, warned Vandana Hari, founder of oil analysis outfit Vanda Insights.

"The commodity derivatives market is designed to provide ample opportunity for hedging positions in the physical market," said Hari. "Unfortunately, it also provides an attractive opportunity for some to gamble."

"Hin Leong joins a rather long list of big names that have bitten the dust due to big bets on commodity prices that went wrong," she said. "Some started with a small loss and just dug themselves into a bigger hole."