TOKYO -- Shares in Asian coal miners are surging as China's ravenous appetite for energy and widespread disruption to supplies push up coal prices.

Investors' rekindled enthusiasm for coal, however, comes amid a global push for cleaner energy, leaving companies with a dilemma over whether and how much to increase output of the commodity.

Indonesia's largest coal producer, Bumi Resources, has seen its shares jump more than 70% since the end of August, while its peers Adaro Energy and Indika Energy have climbed 50% and 74%, respectively.

Indonesia is the world's largest exporter of thermal coal, used to fire power plants. In 2020 it exported nearly 400 million tons, or 40% of the global total.

It is a similar story in Australia and India. Shares in Yancoal Australia, a subsidiary of China's Yanzhou Coal Mining, have soared over 80% since the end of August, while Coal India, the world's biggest coal producer, has risen more than 30%.

These rises stand in sharp contrast to global benchmarks. The MSCI World and MSCI All Country Asia Pacific indexes are both in negative territory compared to the end of August. Benchmarks in individual countries, including China's blue-chip CSI300 and Japan's Nikkei Stock Average, are almost flat. Investors are growing even more bullish on the sector with the approach of the winter season, when coal-fired electricity generation tends to spike.

Coal prices have more than tripled since the beginning of the year, with the benchmark thermal coal price in Asia hitting a record high this month of $269 per ton. The steady rise has been driven primarily by China and India, the world's largest consumers of thermal coal. Both nations are rushing to secure shipments from overseas in the face of limited domestic supplies.

In India, heavy rainfall during the June-September monsoon season disrupted the production and rail transport of coal, which pushed stockpiles to perilously low levels.

On top of Asia's giant coal consumers, European countries are also turning to coal for power generation amid a surge in gas prices.

Coal tends to be relatively cheap. Despite its rally this year, its price is still roughly a third that of liquid natural gas, according to Hiroshi Hashimoto, an LNG expert and senior analyst at the Institute of Energy Economics, Japan.

But increasing pressure to phase out coal in favor of more environmentally friendly energy sources means fewer companies are investing in coal-mining projects. The global push to transition from fossil fuels to clean energy has also made companies more cautious about investing in new capacity, further straining output. "Countries are scrambling for coal, but the number of exporters is limited," said Nobuyuki Kuniyoshi, an analyst at Japan Oil, Gas and Metals National Corp. (Jogmec).

Indonesia and Australia, the two largest coal exporters, have also been struggling to increase output due to heavy rainfall and labor shortages caused by the COVID-19 pandemic.

Russia, the world's third-largest coal exporter, is exporting more coal to China and Europe. According to Russia's Ministry of Energy, the country's coal exports from January to August totaled around 142 million tons, up 11% from 2019, before the pandemic. Russia's exports especially help China, which has halted coal imports from Australia due to diplomatic tensions.

Jogmec's Kuniyoshi believes Indonesia and Australia are unlikely to significantly increase output as few companies are willing to risk new investment in coal.

A spokesperson for Indonesia's Bumi Resources told Nikkei Asia that the company plans to maintain its production target of 83 million to 87 million tons for fiscal 2021, despite the current supply shortage.

Bumi said it recognizes the increasing global pressure to decarbonize but warned of turmoil amid the transition. "Hysterical moves to phase out fossil fuels without affordable robust replacements in place can have catastrophic economic and social consequences," the representative said.

Without a reliable replacement, demand for coal "can reasonably be expected to grow in Asia," the spokesperson added, which could "serve to keep coal prices elevated over the medium and even long term."

In Australia, the government has recently approved several coal projects that some have criticized as ignoring the fight against climate change. Last week, the country's environment minister approved a coal mine extension by Glencore. 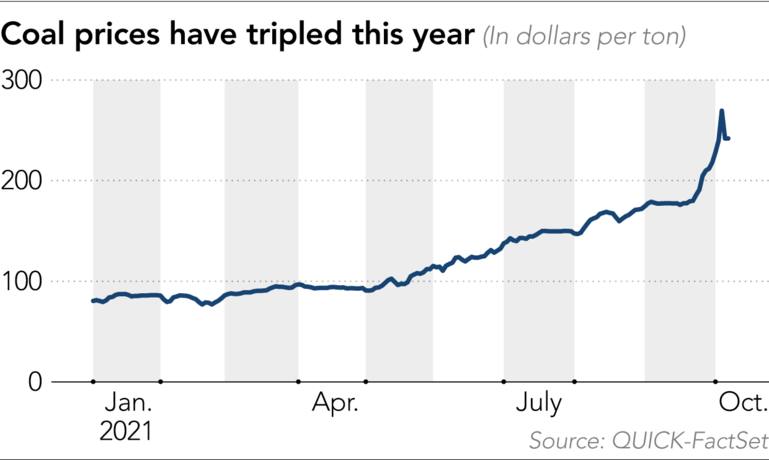 Rising coal prices and demand for energy threaten to undo some progress on environmental goals.

Justian Rama, an equity research analyst at Citigroup Securities in Indonesia, predicts that coal prices will remain above $200 per ton, at least for the remainder of the year. "The current strong coal price may force China to relax its domestic coal safety check in order to improve supply and it may start to reconsider its Australia import ban," he wrote in a note.

Green goals, moreover, are having a lopsided impact on energy supply versus demand, according Shirley Zhang, principal analyst at Wood Mackenzie.

"Climate policy is having more immediate impact on supply than demand," she said. "As energy transition continues, fuel price volatility and market imbalance will be regular issues over the next few years, especially during extreme demand seasons.

In the face of massive power shortages, China has already eased some of its mining curbs and resumed production at some shuttered mines.

Minh Hoang, an analyst at S&P Global Ratings based in Singapore, expects Asia to lag Europe and the U.S. in the transition to cleaner energy because of developing countries' reliance on coal and other fossil fuels as affordable energy sources.

"While coal demand from regions such as Europe and the U.S. are expected to decline in the coming years," the analyst said, "we expect demand growth in Asia -- particularly from markets such as China, India and Southeast Asia -- will more than offset this decline."