TOKYO -- Japan has fought long and hard in trade talks to protect its rice growers from foreign competition. Now the government wants to help them go global.

The agriculture ministry plans to develop new technology to lower cultivation costs in a push to boost exports. It aims to slash production costs by more than 40% by using new crop varieties with greater yields, autonomous tractors and other smart agricultural machinery.

Sales of Japanese rice are growing in Asia, but they are currently limited to expensive restaurants due to high prices. With domestic rice demand continuing to decline, the government wants to develop overseas markets using new technology to lower costs.

Farmers and local governments will test the technology for two years starting this spring in four prefectures -- Miyagi, Ibaraki, Fukui and Gifu. The National Agriculture and Food Research Organization, a national research and development agency, will summarize the results.

One way to cut costs is to reduce farmers' workload. New varieties with higher yields and direct seeding will both help in that.

Rice yield per are (0.01 hectare) is usually around 544kg. But recent years have seen new varieties with yields of 720 kg per are. Research on cultivation by sowing seeds directly in rice paddies, rather than planting rice seedlings, is also progressing.

The ministry also plans to lower costs through greater use of information technology.

Drones can spray fertilizer and chemicals on crops, reducing waste and labor. Other machines, like autonomous tractors, will more efficiently plow large areas of farm land. 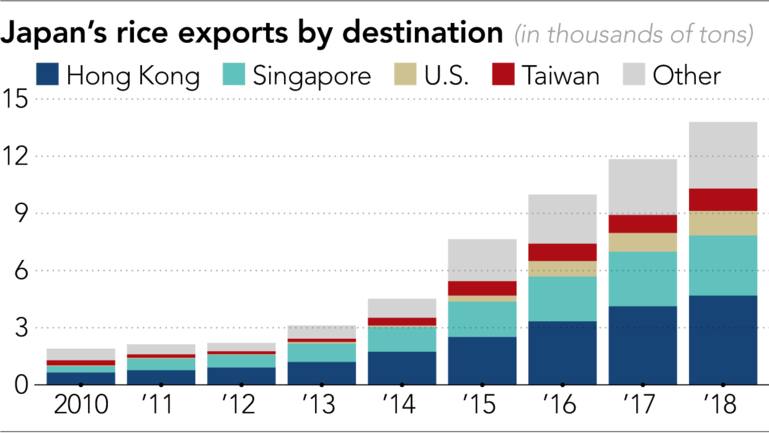 Japan's rice exports in 2018 rose 16% from the previous year to 13,794 tons, according to the farm ministry. That is a sevenfold increase from 10 years ago.

Hong Kong and Singapore are the two biggest export markets for Japanese rice, and China-bound shipments are also expanding.

Japan's rice exports still account for a tiny fraction of its total production. The country exported less than 1% of the 7.33 million tons grown in 2018.

But the importance of overseas markets is growing. Japan's declining population means the market is shrinking, and people are shifting away from rice. Demand is falling by 100,000 tons annually.

Japanese rice exports currently cost 600 yen ($5.36) or more per kilogram, and is consumed primarily by people with high incomes, according to the farm ministry.

The ministry thinks that if prices are lowered to somewhere between 300 and 600 yen per kilogram, more people will buy the grain, like Japanese restaurant chains in China.

Government bodies in Japan have had a hard time using new technology to increase rice production at lower costs. Until recently production volume was regulated to deal with supply gluts. Those regulations ended in 2018.

As a result, researchers have focused on improving the quality of rice varieties until now.

But overseas markets have become more attractive as Japanese food has gained popularity.

"To increase rice exports, it's necessary to both lower production costs and maintain high quality," said Hiroaki Muto, chief economist at Tokai Tokyo Research Center. "It's important for both the public and private sector to work to further improve its brand image."